Von Miller Begins Second Chapter of Career on a Tear 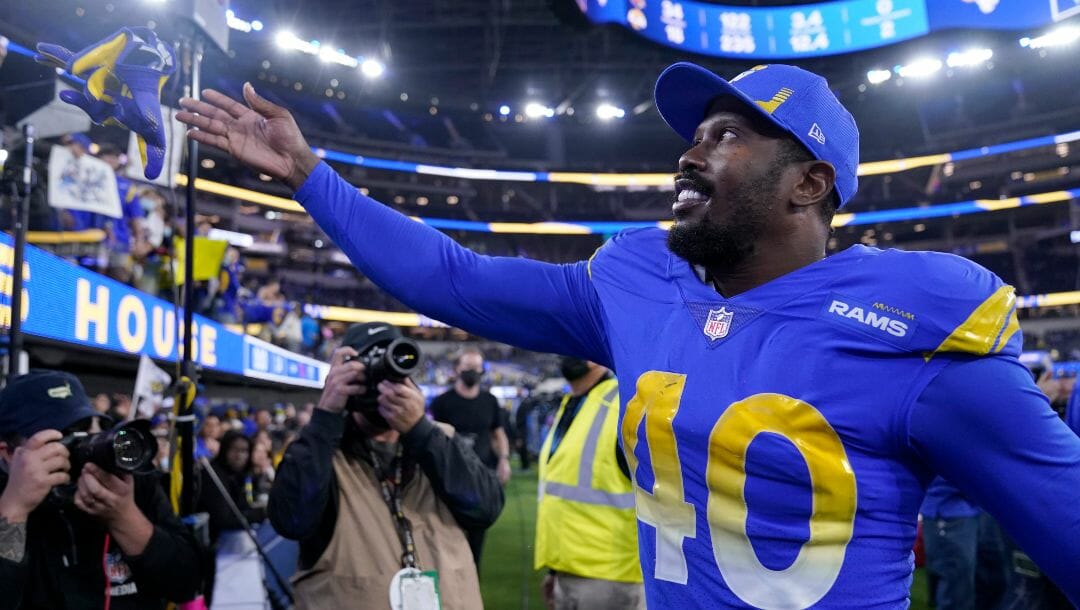 He was sure of it. Von Miller was going to reside in Denver for the remainder of his career.

The star pass rusher, though, was traded away. He was heading to a star-studded team in the Los Angeles Rams, who have Super Bowl odds of -200.

“It’s really hard to put the emotions into words,” Miller told reporters before his voice began to waver. “This is all I know.”

All love from @VonMiller to the city of Denver 🧡

Miller had little idea how much the move would benefit his career and the Rams. He’s provided a dangerous defensive dimension, especially when pressuring quarterbacks. Teams no longer can devote resources to stopping All-Pro defensive tackle Aaron Donald like they could before.

The Rams’ choice to give up second- and third-round NFL Draft picks for Miller has paid off. They’re one win away from a championship, as their Super Bowl betting line is -4.5. Miller is tied for the ninth-best Super Bowl MVP odds at +5,000.

“I think it was a godsend that I came here,” Miller said recently.

Miller has been undoubtedly beneficial for the Rams in more ways than one. But for starters, he’s imposed additional pressure on opposing passers.

Miller has seven sacks in his last seven games, with two against the Baltimore Ravens. Late in the third quarter, Miller dropped back into coverage. Tyler Huntley was forced out of the pocket, and Miller finished the play off for his first sack.

Late in the fourth quarter, the Ravens were down by a point and were desperately hoping to reach field-goal range. Huntley had less than two seconds before he was brought down.

Miller had whizzed by Ravens tackle Patrick Mekari. Even at 32 years old, just four younger than head coach Sean McVay, Miller showcased the burst off the line of scrimmage that’s nearly impossible to keep up with.

“This guy has been outstanding,” Rams defensive coordinator Raheem Morris said. “His rush ability, his unique ability to set the edge, his ability to play physical, his ability to play fast and physical as well as with finesse, all those things are things that make him really special and make him the great player that he has been in this league.”

Miller is Pro Football Focus’ fourth-ranked edge rusher this season with 11.5 sacks. This is with a career already highlighted by All-Pro, Pro Bowl and other accolades.

Miller also excels in pass coverage, as he’s graded No. 3 in that area by PFF, and in setting the edge on running plays. All of this gives Donald more space to operate and win his own matchups.

Donald added he’s learned to become more of a vocal leader with Miller around. His intelligence alone has boosted the Rams.

Miller feels he’s still a long way from retiring. But he, Donald said, will be wearing a gold jacket with an introduction into the Pro Football Hall of Fame one day. His short time in Los Angeles hasn’t hurt.

“He understands the game, understands how to defeat a guy and it’s showing consistently,” Donald said. “For the past few weeks, he’s been showing up big time for us when we need him, and we’re going to have to continue to have that from him.”

Miller’s already won a championship and has been a Super Bowl MVP in the process. He badly wants Donald and his new allies to share that same triumphant feeling.

Miller and Donald’s “whole friendship is about winning this Super Bowl,” Miller said. In this journey, they’re seeking to bring each other greater individual success while compelling others around them to follow their lead.

Miller has a self-admitted selfish desire. He wants to be a key piece in Donald winning his first championship. And when Donald has his own induction into the Hall of Fame, Miller wishes Donald points out how the Rams’ dynamic changed when he was added.

“That’s what I do it for. That’s it,” Miller said. “That would mean everything to me.”

Miller called hoisting the Lombardi Trophy “life-changing.” Miller hoped Super Bowl 50 wouldn’t be the highlight of his career, though, aiming to continue building on his resume.

Ultimately, he aspires for Super Bowl 56 to hold that honor. He’s aiming to play the best he ever has.

“This is the biggest game of my life,” Miller said, “and I want to go out there and play it that way.”

Dissimilar from other appearances in his career, Miller will be suited up in a Rams jersey playing in the sport’s ultimate setting. But like those games before, he knows winning will take ultimate effort in every aspect.

Miller is one of the few Rams who have won a Super Bowl on the roster. When asked for the advice he’s giving others on the team, he emphasized the need to take advantage of the opportunity.

Miller admitted he felt spoiled early in his career. The Broncos qualified for the playoffs several times and reached the Super Bowl twice. He began to assume his career would remain loaded with team success.

It wasn’t. So Miller is seeking to instill a high level of urgency in his teammates. Miller knew from his time in Denver he had to be more vocal, that leading by example and making plays “was just not going to cut it.”

He’s imparting messages similar to those he heard from Broncos teammates like DeMarcus Ware. Ware, Miller recalled, would halt team meetings only to remind others of their need to focus. Everyone already understood that. But hearing about it from Ware, Miller said, underscored it.

Amidst years of weight lifting, watching film and additional training, Miller mentally took a step back to relish in where he is. He wants his teammates to also understand the gravity of the situation.

“All the plays you make, people will remember for all of football eternity,” Miller said. “You’re kind of etched into history. … It’s hard to explain to everybody else. I just tell them it’s one game away from football heaven.”

"I come from the DeMarcus Ware tree."

.@VonMiller talks about how much @DeMarcusWare means to him and the impact he had on his career.

He has the maturity to recognize nerves are likely to accompany the mix of emotions one may experience before a Super Bowl. But he also understands the Bengals will likely be dealing with the same things.

Everything the Rams have accomplished, all that Miller has done for his new team, has led to this moment. As someone who has lost and won in a Super Bowl, Miller hopes this chance doesn’t slip away.

“Pressure is privilege,” he said. “To feel pressure, it’s natural, to feel anxiety and to be nervous, all the things that come with playing in a Super Bowl, it’s natural. The thing about it, you want to embrace it.

“You don’t want to shy away from the moment.”