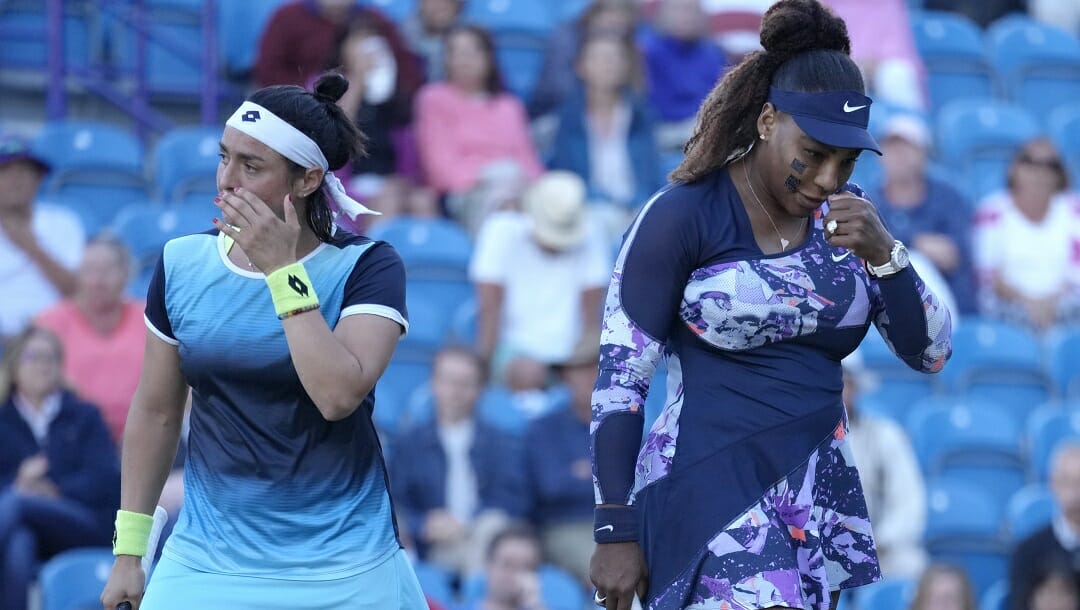 The long wait is over. We finally have a draw at Wimbledon, which means the long-awaited crop of first-round Wimbledon odds should be available soon. Matches are being added to the online sportsbook at BetMGM as I write this.

The release of the Wimbledon draw isn’t the only big tennis betting news at the end of this week, though. We’ve got some major health news that’s affecting some of the biggest names in the women’s game.

Ons Jabeur is a 27-year-old Tunisian star player that has methodically risen through the WTA ranks over the years. Her victory at the German Open last week underscored her place as one of the best players in tennis right now.

Her WTA ranking is currently No. 3. She’s also seeded third in the Wimbledon draw.

At BetMGM, she’s currently priced at +800 in the women’s Wimbledon odds market. That’s a big move up the table, considering she opened at +2800.

While Jabeur only has six percent of the overall handle, she is ultimately the second greatest liability for BetMGM in the women’s tournament, thanks in part to her lucrative opening position.

Sharp tennis bettors favored her because of her great 2022 form and her history of playing well on grass. She won WTA Birmingham in 2021 and subsequently advanced to the Wimbledon quarterfinals before losing to Aryna Sabalenka, 4-6, 3-6.

Unfortunately, Jabeur appears to have suffered some kind of knee injury this week. She’s been playing in the doubles tournament at WTA Eastbourne as a final warm-up for Wimbledon, and she fell a bit awkwardly in her first-round match. She withdrew from play in yesterday’s semifinal match.

Hopefully, Jabeur’s withdrawal is just a cautionary measure to protect herself against any further aggravation over the next 72 hours. A bit of rest may be all she needs. Given her recent string of wins, form doesn’t seem to be much of a problem.

A knee tweak probably isn’t enough to affect a match with Jabeur’s first-round opponent, whom we now know is Swedish qualifier Mirjam Bjorklund (Rk 123). It may, however, affect bettors’ appetite to bet her title odds at such a reduced price.

There is another big angle to this story. Jabeur’s doubles partner at Eastbourne is none other than Serena Williams, who similarly was looking to get some practice in ahead of Wimbledon. Now that her pairing has been forced to withdraw, her practice ahead of next week’s draw is perhaps more limited than she initially expected.

Williams, who turns 41 later this month, has not played on tour since last year. She suffered an ankle injury in the first round at Wimbledon last year. (You can read more of my analysis on Serena’s return to Wimbledon – including an explanation of her betting odds – by clicking here.)

There was even more major health news from the Wimbledon women’s warm-up circuit on Friday. Former No. 1 Simona Halep was a walkover, as she withdrew from her Bad Homburg semifinal match against Bianca Andreescu with a neck injury.

Halep has missed major time over the last two years as she has recovered from a couple of lower-body injuries. However, she has looked very competitive on tour this year, rolling up a 26-9 record at professional tournaments in 2022 so far.

Halep was the women’s champion at Wimbledon in 2019, but hasn’t been back since. (In 2020, the tournament was canceled because of COVID-19; last year, she was injured.) She’s one of my picks to go far in this year’s draw.

Like Jabeur, Halep’s Friday withdrawal in Germany could just be cautionary. But with this many top-end competitors from the women’s draw suffering last-minute setbacks, this may create an opening for a more unknown figure to make her case in London over the next two weeks.

It’s something for tennis odds bettors to watch closely in the coming days.