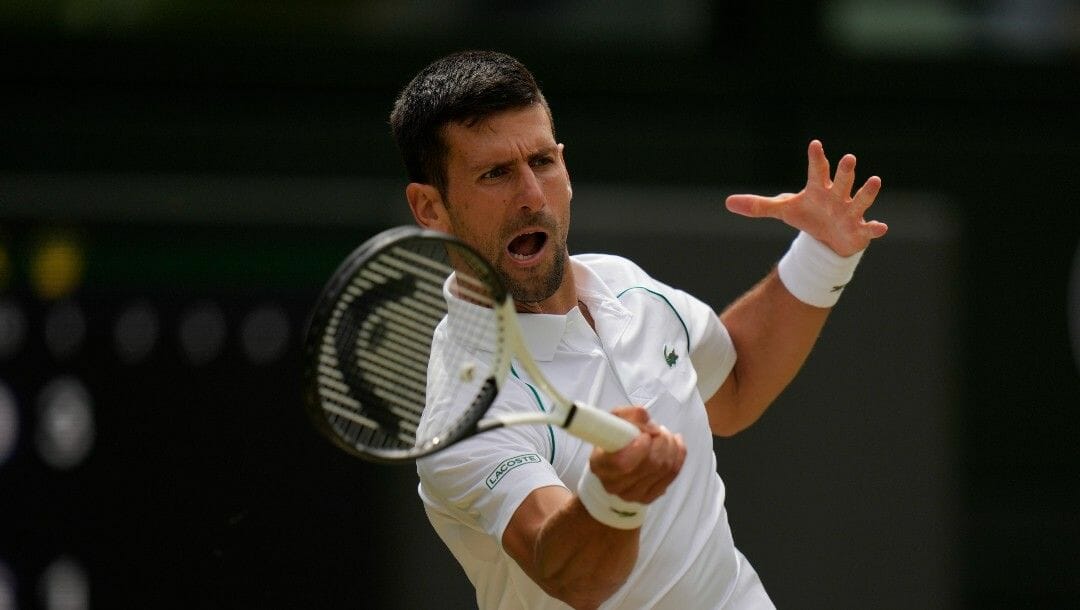 Unless you’ve been trapped in a deep, dark, dank cave without access to the internet, you know, based on Wimbledon betting odds, who the overwhelming favorite is in the first of two semifinals.

Djokovic is vying for his seventh and fourth consecutive Wimbledon title, putting him one behind Roger Federer’s all-time record of eight.

According to Wimbledon odds, Djokovic is the -333 frontrunner to climb within a single title of Federer’s all-time mark, a record that was once considered untouchable.

Norrie, who will play in his first Grand Slam semifinal when he takes to Centre Court Friday, is on the polar opposite side of the spectrum. The top-seeded Brit is sitting at +2000 to get his name indelibly etched on the revered trophy.

Take a second look at Norrie’s astronomical +700 underdog odds and ask yourself, does the 26-year-old Brit have even a glimmer of hope against arguably the best grass-court player?

Making a solid case for Norrie to pull off what would be one of the most memorable and improbable upsets in the 100-year history of The Championships is about as easy as learning the process of nuclear fission.

If you didn’t catch Norrie’s quarterfinal encounter against David Goffin, you missed the power and influence of the great equalizer, the boisterous and frenzied partisan crowd.

Welcome to the semi-finals, @cam_norrie! 🇬🇧

He went down two sets to one against the experienced and cunning Goffin but was buoyed at pivotal moments by the 10,000-strong crowd, most of whom actively participated – as much as the prim and proper All England Club allows – in the absorbing No. 1 Court clash.

📢 Listen to that crowd. It's a dream come true for @cam_norrie at Wimbledon #Wimbledon pic.twitter.com/NZxZ0Hb9Dq

When he’s rolling confidently, Norrie has a formidable and menacing forehand. However, he is also calm, composed and level-headed.

While all of the attributes above will aid in his plight against the tournament’s No. 1 seed, the raucous Centre Court crowd will invariably be the catalyst of any would-be historic upset.

Friday’s match represents a slice of uncharted land for Djokovic, who has never beaten a Brit in the final two stages of Wimbledon. He lost to Andy Murray in the 2013 final in straight sets, the only time the 20-time Grand Slam winner has faced a Brit in either of the final two rounds at the All England Club.

That, however, shouldn’t faze a man who has overcome every conceivable impediment during his decorated 20-year career.

Looking for his fourth successive Wimbledon title, Djokovic appeared to be on the ropes in his quarterfinal against the abundantly talented Jannik Sinner.

The Italian 20-year-old got off to a two-set headstart, which still wasn’t enough to dethrone the king of grass. Finally, Djokovic seemingly flicked a switch or, as he so bluntly admitted in his post-game interview, had a match-turning bathroom break.

This is how champions play 💫

Over to you, @DjokerNole… #Wimbledon | #CentreCourt100 pic.twitter.com/fn5KXfpxUo

I’m sure those in the audience with weak stomachs found the comments turned into something entirely different.

Out popped Djokovic to win the following three sets with audacious ease. The result marked his seventh two-set comeback triumph.

That’s what Norrie is up against.

The combatants have played each other just once previously, with Djokovic winning handily on hard court, 6-2, 6-1, in 2021.

Even the biased crowd, who will be equal parts boisterous and respectful, won’t be enough to extend the Brit’s dream Wimbledon run.

Djokovic will plow on, hopefully, devoid of any infamously public, albeit relieving, bathroom breaks, and win his 26th consecutive match at The Championships, putting him within a single victory of a seventh Wimbledon trophy.

Unless you’re forking out wads of cash, it won’t be worth backing the Djoker on the moneyline. Opt for a four-set victory, priced at +280, instead.

BetMGM is the premier online sportsbook for updated tennis odds.

Whether you’re a new bettor making your first deposit, casual fan browsing Wimbledon odds, or a longtime diehard tracking live betting trends, there are online betting opportunities for everyone.