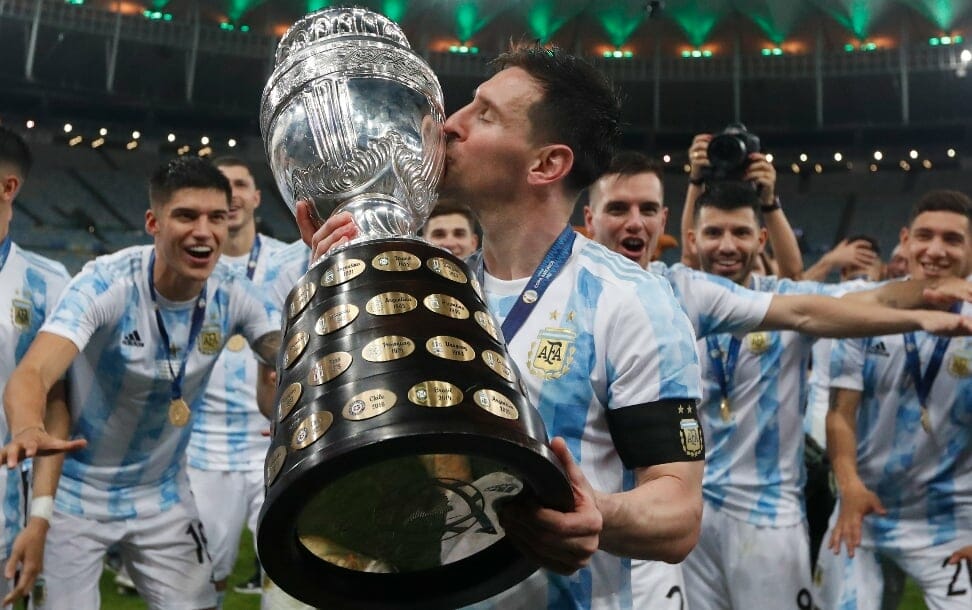 Five powerhouse nations lead the way as favorites to win World Cup 2022, a few of which offer the best value as futures picks.

While each favored nation should be shoo-ins to advance out of their respective groups, the impetus to ensure friendlier Round-of-16 draws is placed on securing first place. France won World Cup 2018 by beating Croatia 4-2 in the final, while England fell to the runners-up in the semifinal.

Brazil was unceremoniously dispatched by Belgium in the quarterfinals, while Spain and Argentina were ousted in the Round of 16, both bitterly disappointing results for the 2010 winners and 2014 finalists.

Here’s a look at which of the elite five has the best chance of claiming World Cup 2022 glory.

Winning three successful international tournaments, including World Cup 2010, Spain enjoyed a glorious and fruitful patch from 2008-12. Two European Championships on either side of that famous 2010 World Cup triumph sent the nation into a state of delirium.

La Roja has failed to reach those epic heights since, but is showing signs of returning to its former eminence.

Spain fell to Italy in the Euro 2020 semifinal and lost to France in the Nations League final a few months later. La Roja rebounded after an early loss in the qualifiers to win Group B, taking 19 points from eight matches.

They’re in a challenging group with Costa Rica, Germany and Japan. A second-place finish will probably see the Spaniards face Belgium in a tantalizing Round of 16 affair.

If Spain wins Group E, a Round of 16 clash against Croatia most likely awaits. La Roja should have enough to get by an aging Croatian side. However, winning Group E would also result in a potential quarterfinal clash against Brazil. While a mouthwatering prospect, that could prematurely end Spain’s hopes of repeating its 2010 World Cup success.

Qatar 2022 represents Lionel Messi’s last chance to lead his country to glory on the world’s biggest stage. Messi finally got the monkey off his back when he led Argentina to the 2021 Copa America title. It was his first major trophy in a 16-year international career and Argentina’s first in 28 years.

Argentina is pitted against Mexico, Poland and Saudi Arabia and should claim first in the group relatively easily.. If that outcome eventuates, Argentina would likely have a comparatively rudimentary passage to the semifinal. The White and Sky Blue would most likely meet Denmark in the Round of 16 before a quarterfinal test against the Netherlands.

If Messi has anything to say about it – which he usually does – expect Argentina to at least advance to the semifinal. Anything is possible at that stage of the tournament. At +700, Argentina represents excellent value.

The Three Lions have been knocking on the door of world supremacy for a few years but have yet to reach the eminent heights expected of them. England arguably has the best man-for-man roster in world football, most of whom are smack dab in the prime of their respective careers.

England lost to Croatia in the World Cup 2020 semifinal before falling at home in penalties to Italy in the Euro 2020 final.

Most expect England to make a deep run at World Cup 2022. However, some recent poor results have some wondering whether their confidence has taken a hit. Those losses – headlined by a 4-0 defeat to Hungary, the worst home defeat in 94 years – shouldn’t have any residual impact on the Three Lions.

While unimpressive and palpably lackluster, those defeats came on the back of a long and grueling Premier League campaign. Most players had already left on holiday, at least mentally.

England should win Group B, which would pit them against either Ecuador or Senegal in the Round of 16. A quarterfinal contest against France would offer a tasty proposition for both nations. Based on winning pedigree at the international level, the French would be favored ever so slightly.

However, this is England’s time to succeed. If they don’t win World Cup 2022, another opportunity might not come their way for the foreseeable future.

The defending World Cup champions are always a force to be reckoned with, especially in pivotal moments. If all goes according to plan, France and England are destined to face each other in the quarterfinal.

France endured a rare disappointment at Euro 2020, losing to Switzerland in penalties in the Round of 16. While that can happen to any team at the top level, Les Bleus usually finds a way to prevail.

World Cup 2022 could represent a changing of the guard, with England looking to finally get one over on their bitter rivals. Of course, anything can happen in a one-off contest, but if the two teams meet in the quarterfinal, look for England to finally vanquish France.

If England and France don’t meet in the quarterfinal, France should make it to the final four. They won’t, however, repeat as champions.

Brazil is looking for its first World Cup triumph since 2002 and are formidable favorites entering the competition. In Conmebol World Cup qualifying, Brazil didn’t lose in 17 matches, drawing just three. It took 45 from a possible 51 points against South America’s best football nations, a clear statement of intent from Adenor Bacchi’s side.

Brazil’s last defeat came against Argentina in the Copa America final in June 2021. Brazil enters World Cup 2022 with just one loss in the last three years. They will be brimming with confidence and shouldn’t have any issue living up to their favorite status.

Brazil should win Group G fairly easily, setting up a Round of 16 contest against either Portugal or Uruguay. Either matchup would be a tasty proposition, but neither opponent is good enough to oust a Brazilian team oozing with self-belief. Brazil would then meet either Spain or Germany in the quarterfinal, providing a more foreboding challenge.

Though based on current form, Brazil should eke a win against either elite side. Look for Brazil to make the final for the first time since 2002. Whether they win the World Cup depends entirely on which team they are pitted against in the showcase match.