Swiatek Pulls Out of WTA Charleston Because She’s Too Good 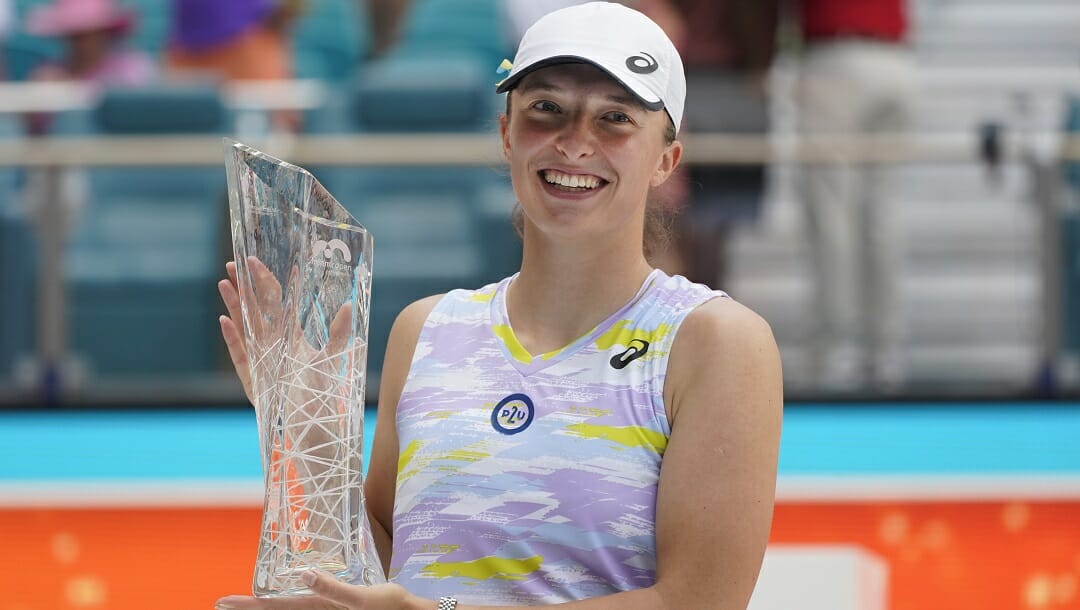 You can do a great many things in the world of online sports betting. One thing you can’t do, though, is bet on Iga Swiatek to win the WTA 500 tournament in Charleston, South Carolina this week.

After ripping off 17 straight wins at a slew of prominent tournaments, Swiatek has withdrawn from this week’s Charleston draw. She is too exhausted from kicking everyone’s ass.

Let me back up. I can’t assume everyone is locked into tennis betting like I am.

Swiatek is a young Polish phenom who broke onto the scene in 2020, winning the COVID-rescheduled French Open in September. She followed it up with a brilliant tour in 2021, making her first debut at the WTA Finals.

This year, she has absolutely dominated the early spring period. Swiatek has just won three straight WTA 1000 tournaments, outlasting the rest of the draw in Qatar, then Indian Wells, and now Miami.

She hasn’t dropped a set in nearly a month, since Angelique Kerber tagged her in the opening frame of the third round at Indian Wells.

She hasn’t lost a match since Dubai, in mid-February. Six weeks of perfection.

So you can forgive her if she’s just a bit tired.

And it’s not like any of this was against lesser competition, either. This was a series of quality wins against known names that are used to having favorable tennis odds.

At the Indian Wells final last month, she soundly beat Maria Sakkari – perhaps the hottest player on the tour, at the time – 6-4, 6-1.

Unsurprisingly, all this top-level carnage vaulted Swiatek to an unprecedented ranking. On Monday, she became the first Polish woman to ever be ranked No. 1 in women’s tennis.

Ushering in a new era 💫

Tennis Betting: How to Bet WTA Charleston with Iga Swiatek Out of the Draw

Obviously, I’m quite pleased with myself for identifying Swiatek as a strong tennis betting target on The Lion’s Edge, all the way back in the spring of 2021.

But I do still have a draw here in front of me in Charleston, Swiatek or no Swiatek, and these tennis futures aren’t going to bet themselves.

Charleston is a departure from the American hardcourt swing that dominates most of March, as it is a clay tournament. Unsurprisingly, Spanish player Paula Badosa is the favorite to win this tournament at +550.

I don’t love betting favorites, but Badosa is probably about as good a value you can find at the top of a tennis odds table. She’s probably the strongest clay player in the draw, and her path to the championship match won’t have much resistance.

If you’re looking for someone with a better payout in this tournament, the key is to back a modest underdog somewhere in the top half of the draw. Jessica Pegula (+1200) or Amanda Anisimova (+1600) are ideal targets.

Under no circumstances should you bet top-seeded Aryna Sabalenka at +750. She plays down to competition way too often.

Pay close attention in Charleston. With Ash Barty’s retirement and Swiatek’s withdrawal, this early clay tournament is a great opportunity to scout some potential underdogs for the French Open women’s draw.

At the online sportsbook, tennis odds are available for thousands of matches each year.

Whether you want to bet on Rafael Nadal in the French Open, Iga Swiatek at the U.S. Open, or any other player, there’s no shortage of tennis betting opportunities at BetMGM.