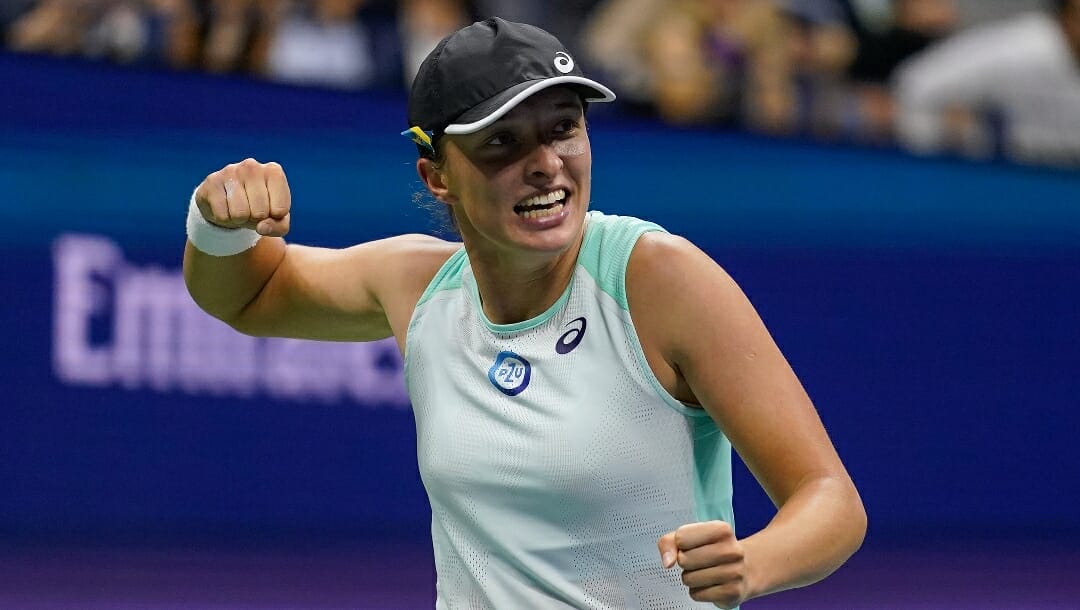 The two best players in women’s tennis will meet in the US Open final on Saturday, with Ons Jabeur and Iga Swiatek looking for their first hardcourt major title.

Iga Swiatek opened the tournament as the favorite (+450), while Jabeur’s US Open tennis odds were substantially longer (+2000) before she played a match.

Now the world No. 1 and soon-to-be world No. 2 square off on the grandest tennis stage, the winner to be crowned US Open champion for the first time.

Jabeur, currently the world No. 5, will become the world No. 2 whether she wins or loses the final. The 28-year-old is also the first African to qualify for the US Open final, while Swiatek is the first Polish woman to play in the showcase event.

A win away from her second Grand Slam title of the season, Swiatek isn’t in danger of relinquishing her stronghold on the world No. 1 ranking.

The deserving finalists set up a grandstand culmination to the 2022 US Open.

Jabeur and Swiatek have played each other four times, with both winning twice. They also split the two decisions on hardcourt, with Jabeur winning most recently in straight sets at the 2021 Cincinnati Open.

Swiatek’s dominance over the women’s field trailed off after she won the French Open, her sixth successive title (three on hardcourt). Alize Cornet thwarted her 37-match winning streak in the third round at Wimbledon.

While the 21-year-old hasn’t won a tournament in the year’s second half, she raises her level and executes almost flawlessly in majors. She’s 20-2 at Grand Slams in 2022 and has won nine of her previous 10 against top-10 opponents.

Swiatek is starting to come into her own on hardcourt, too. Renowned for her unmatched expertise on clay, Swiatek, with a 28-5 record in 2022, improves every outing on hardcourt.

She has dropped just two sets en route to the final (one in the semifinal against Aryna Sabalenka and one versus Jule Niemeier in the Round of 16).

Swiatek, at times, struggles to find consistency on her serve. She was broken six times against Jessica Pegula in the quarterfinal and five times in Thursday’s semifinal.

However, she makes up for what she lacks in serving consistency with her dynamic, laser-focused return game.

Along with putting her opponents continuously on the back foot, Swiatek also makes the most of her break opportunities, executing at a 70% success rate against Sabalenka and 64% versus Pegula.

Jabeur was the embodiment of composure in her semifinal against Caroline Garcia, who entered the match as the most in-form player on tour.

She capitalized on Garcia’s palpable nervousness, putting the match beyond reach before the Frenchwoman came to grips with the occasion.

The Tunisian learned invaluable lessons from her Wimbledon final defeat, and she will need every ounce of her zen-like calmness throughout the final to pull off the upset.

Despite a masterful US Open in which she has dropped just one set thus far (back in the third round), Jabeur is still only 10-8 on hard courts this season. So before the US Open, she was a subpar 4-8 on the surface.

Jabeur is the one player on tour who can disrupt anyone’s game plan, including her indomitable Polish opponent. The Tunisian has the most comprehensive array of weapons and can deploy them instantly, no matter the situation.

She can swap baseline howitzers, opt for deft drop shots, or hit a dizzying number of effective slices. But like Swiatek, her serve is inconsistent.

She was broken four times in the quarterfinal victory over Ajla Tomljanovic but managed to serve expertly throughout her semifinal triumph, in which she didn’t concede a breakpoint.

Jabeur is 6-0 in semifinals this year and has won a tour-leading 92 matches since the start of 2021.

If she serves lights out as she did against Garcia, Jabeur will win her first Grand Slam title.

However, expecting another immaculate service match from Jabeur, especially on the world’s biggest tennis stage in just her second major final, is a somewhat fantastical notion.

Look for Swiatek to win an epic three-set final and become the first woman to win two majors in the same year since Angelique Kerber accomplished the feat in 2016.