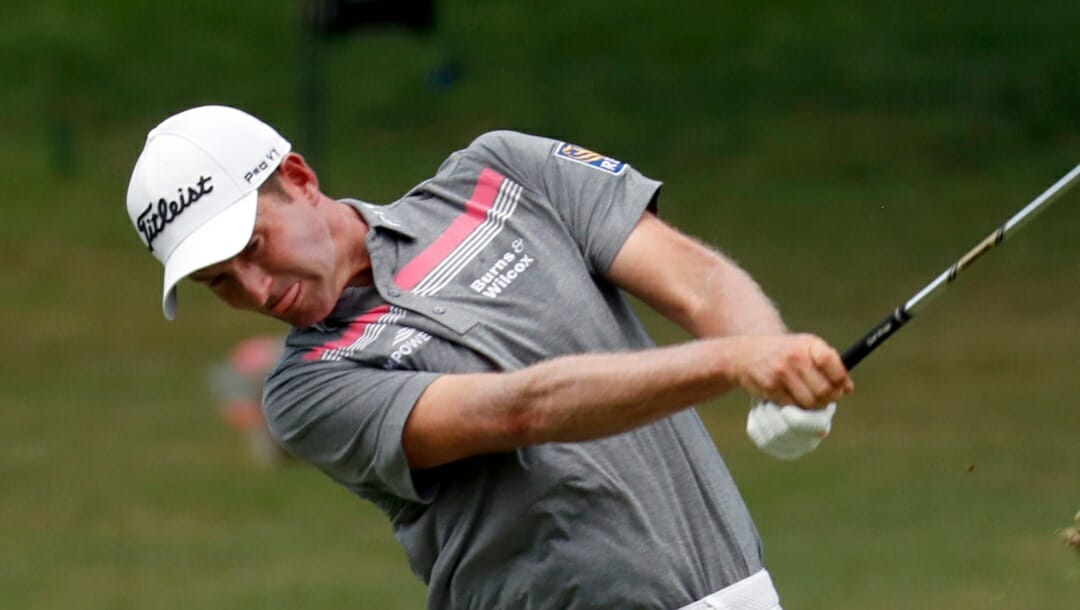 It’s the final regular-season stop for the PGA Tour this week as we head to Sedgefield Country Club for the 2021 Wyndham Championship.

On Thursday, 156 golfers tee off in Greensboro, Northern Carolina, in what could be their last chance to punch a ticket to The Northern Trust, (where only the top 125 FedEx Cup ranked players will feature).

Many of the world’s best golfers have already earned their place in the FedEx Cup playoffs, and as such, the field isn’t particularly loaded this week. However, Webb Simpson, Hideki Matsuyama, Patrick Reed, Will Zalatoris, and Louis Oosthuizen will still feature in Greensboro.

Let’s look at the course, the players to watch, and the top 2021 Wyndham Championship betting odds.

This is Greensboro’s 82nd time hosting this event; it’s been held at Sedgefield since 2008 and previously in the 1960s and 1970s. The Donald Ross design at Sedgefield has challenging green complexes and rolling terrain that favors strong putters and short-game specialists that are excellent at scrambling.

The Bermuda greens are raised and undulate drastically, which means they’re fast and tricky. Properly positioned approach, driving accuracy, and solid ball striking will be key for lower scores. Keep in mind that in the past five years of this event, it’s taken at least 21-under-par to be crowned the champion.

Past Winners at The Wyndham Championship

As mentioned, the field is relatively open at this stage, with plenty of players from outside the top 50 OWGR.

These are the players to keep an eye on this week:

It’s impossible not to mention Webb Simpson when it comes to this competition. He did name his daughter Wyndham, after all. Simpson didn’t have a great week at St. Jude and even lost strokes in approach — his best category — in all of his first three rounds.

However, he showed flashes of what he is capable of on Sunday, as he gained more than three shots in Memphis with his iron play. He also gained 4.26 shots tee to green in the final round to give him confidence going into his favorite event. In his last eight rounds on the Sedgefield course, he ranked No. 1 in SG: Tee-to-Green, Approach and Ball Striking.

It’s been an impressive, if somewhat frustrating, season for the South African, and I fully expect him to continue his strong streak in Greensboro. Oosthuizen had a poor final round at the St. Jude Invitational last week, shooting 74 and leading to a T17. Prior to Memphis, Oosthuizen had three straight top-3 finishes and has been a runner-up four times.

He is undoubtedly the tour’s top putter, ranking first in strokes gained and total putting, which will be essential at Sedgefield. The 38-year-old has never won on American soil, and he’s making his debut at Sedgefield, but you can expect a top 5 finish at least.

Zalatoris finished an impressive T-8 in Memphis last week, his best result in three months. TPC Southwind seemed to agree with him. His opening round consisted of a dead neutral in strokes gained on approach, and his iron work helped him pick up strokes in the rest of his three rounds. He also gained at least 0.88 strokes, putting in three of the four rounds.

The 24-year-old is at home in Greensboro, having played his college golf at Wake Forest just down the road. Despite being ranked No.30 in the world and having enough points to make it to the FedEx playoffs, he is a non-member and still has to earn his PGA Tour card. The main motivating factor for Zalatoris is that he has to win here to qualify for the playoffs.

At 36-years-old, Schwartzel is about to finish up one of his best seasons, ranking 45th in the FedEx Cup Standings. He’s just coming off a runner-up finish at the 3M open, and he’s had success at this course before — finishing third in 2015. Although the South African’s putting is inconsistent, he does favor fast Bermuda grass and ranks seventh in Strokes Gained: Putting on this type of green in his past 24 rounds.

Veterans have fared well in the past at Sedgefield Country Club, and this could be an opportunity for Schwartzel to gain some valuable points.

All of the previous five winners at Sedgefield managed a -21 or better. A low score and a bunch of birdies are necessary for victory in the Wyndham Championship. Kizzire certainly knows all about making birdies. He ranks 1st for Birdies or Better: Gained in his last 24 rounds.

Of course, the 35-year-old certainly tends to throw a few bogeys in the mix, but Sedgefield is a relatively uncomplicated course that shouldn’t give him too much trouble. On top of this, fast Bermuda grass is Kizzire’s A-game. He ranks third in the field for fast greens, and he could be an excellent choice to excel at Sedgefield at a great price.

Sabbatini was not having a season to remember prior to the Olympics, and he was undoubtedly struggling on the circuit. However, he shot 61 in the final round in Tokyo to claim the silver medal, just one shot behind Xander Schauffele, who took gold.

He also goes into this week with the knowledge that he has an excellent history at Sedgefield. The 45-year-old has finished in the top-6 in three of his last five trips here, most recently in 2019. Donal Ross Designs are a firm favorite for him, and in his last 36 rounds, he ranks 3rd in the field in Strokes Gained: Total on Ross Designs.

Sure, Sabbatini hasn’t excelled this season, but he will be brimming with confidence after his Olympics display and knows this course very well.

Keep Up With All the Golf Action With BetMGM

We might be nearing the end of the PGA Tour season, but there’s plenty more action to come. Get the best golf betting odds, tips, and insights on golf tournaments from around the world with BetMGM.

Register with BetMGM and place your golf bets today.