How Many Yards Will Ja’Marr Chase Have Against the Chiefs? 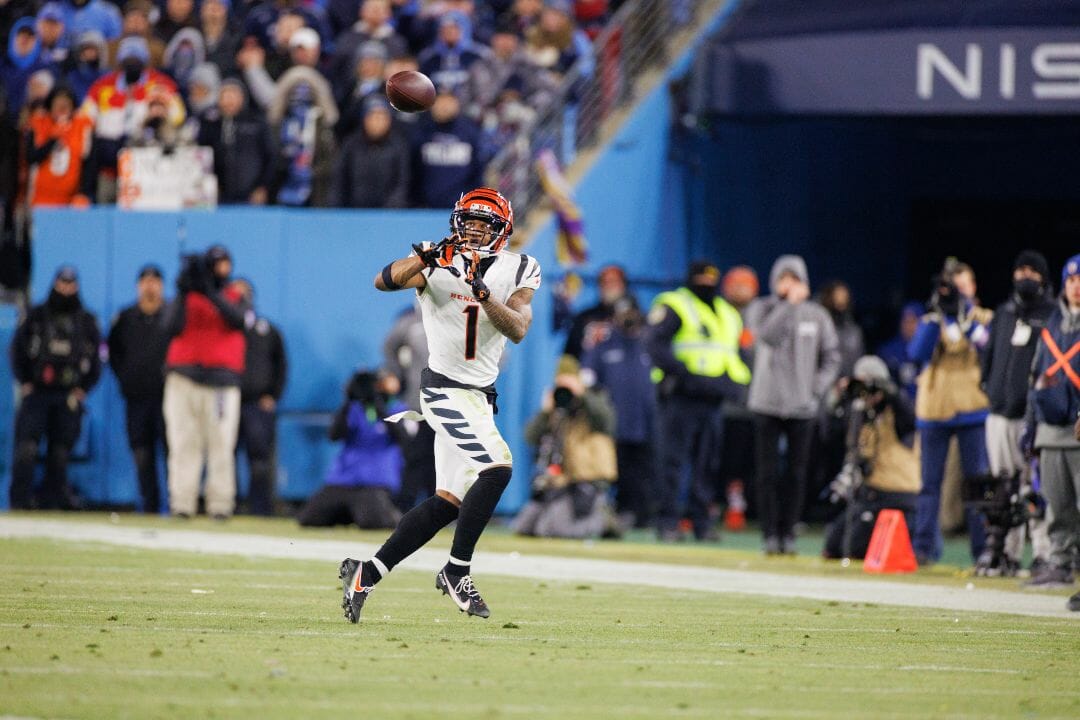 This year’s Cincinnati Bengals are just one win away from making their third Super Bowl appearance in franchise history after finishing with a losing record last season.

A significant reason for their quick turnaround has been the brilliance of rookie wide receiver Ja’Marr Chase, who the Bengals selected fifth overall in the NFL draft.

His connection with college teammate and current Bengals’ quarterback Joe Burrow, and the subsequent productivity, has paid immediate dividends. Can the Bengals beat the Kansas City Chiefs for the second time this January and win the AFC?

The Bengals will head to Kansas City and attempt to dethrone the two-time defending AFC champions, the Kansas City Chiefs.

Chase had a remarkable season, finishing fourth in receiving yards with 1,455 and third in receiving touchdowns with 13.

His best performance came in Week 17 against the Chiefs, and it was one of the most dominant single-game receiving performances of the year. He caught 11 of his 12 targets for 266 yards while also finding the end zone three times. He led the way in a 14-point comeback win that caused the Bengals to clinch the AFC North.

In the first round against the Las Vegas Raiders, Chase hauled in nine passes for 116 yards while also getting three carries for 23 yards rushing. Last week, he caught five passes for 109 yards. He’s yet to score this postseason but is still making plenty of plays.

When these teams met on January 2nd, nothing the Chiefs tried could slow down Chase. He beat man coverage, found holes in zones, and racked up 153 yards after the catch.

Kansas City’s defense has done well limiting their opponent’s top receivers so far this postseason, though.

They held Diontae Johnson to just five catches, 34 yards, and a touchdown in their first playoff game. Last week, they limited Stefon Diggs to three catches and seven yards for the game. They both finished the season in the top-10 for receptions and receiving yards.

However, they couldn’t contain Gabriel Davis last week as he recorded 201 yards and four touchdowns on eight receptions. The Bengals have two other talented receivers capable of taking over a game like that if they give Chase too much attention. Tee Higgins has over 1,000 yards receiving on the year, and Tyler Boyd has 828 yards. At 6’4, Higgins is an excellent option in the red zone and can high point the football against most defensive backs he faces, while Boyd is an excellent slot receiver with strong hands who averages 12.4 yards per reception.

The Chiefs’ best bet at slowing down Chase and the Bengals’ offense is their pass rush. Joe Burrow got sacked nine times last weekend, and in the first matchup, the Chiefs brought him down four times.

If he doesn’t have time to throw, getting Chase the ball will be more difficult.

How Well Will He Do?

Given how the first game went, I’d imagine that the Bengals will look to throw him screens and take a shot deep whenever they get one-on-one coverage on the outside again. I would be surprised if Ja’Marr Chase didn’t reach at least 100 yards receiving again this week unless Kansas City overcommits to stopping him.

If you want to place bets on the AFC Championship game, head to BetMGM, the best online sportsbook. Create an account today for a risk-free initial bet of up to $1,000.