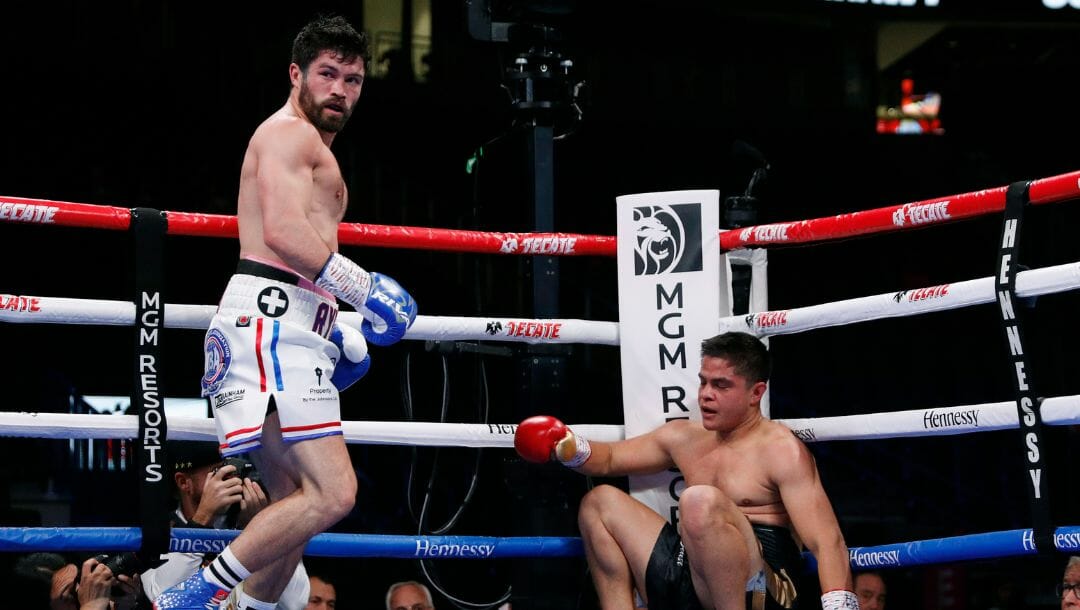 This weekend, an all-British boxing title clash will be witnessed inside the O2 Arena in London, United Kingdom, as undefeated Zach Parker (22-0) is set to face a veteran opponent in John Ryder (31-5) for the WBO Interim Super Middleweight Title. Ryder replaced Parker’s original opponent for the match, Demetrius Andrade, who withdrew from the fight.

Parker will be the favorite in the boxing betting odds at -255, while Ryder takes the underdog role in BetMGM’s online sportsbook at +200. Touted as the next great challenger for the undisputed super middleweight champion, Canelo Alvarez, Parker is ready to book that mega showdown with a win over Ryder officially.

Meanwhile, Ryder is looking for an upset that would disrupt the order of challengers and capture another interim title, much like he did in 2019 when he captured the WBA Interim World Super Middleweight Title.

After a short amateur run from 2012 to 2015, Zach Parker made his professional debut in July 2015, where he scored a fourth-round TKO win over Lewis van Poetsch. He won his next 15 fights, including ten stoppages, to finally earn his first minor title shot in November 2018 against Darryll Williams for the vacant British Boxing Board of Control Super Middleweight Title.

It was Parker’s first real test in the professional setting as Williams pushed him to 12 rounds which earned him a close split victory to claim his maiden boxing title. After this win over Williams, Parker TKO’ed Steven Crambert in the fourth round of their eight-round battle in May 2019 to secure another title opportunity.

The Derbyshire, United Kingdom native fought Rohan Murdock for the vacant WBO International Super Middleweight Title in March 2020 and successfully defeated him with an eleventh-round TKO stoppage to acquire another boxing title under his name. Since then, Parker has been able to defend the title thrice.

First, he obliterated Vaughn Alexander with a second-round TKO in March 2021 before doing quick work of Sherzod Khusanov in July 2021, as he only needed one round to knock him out with a powerful left hook punch to the body. Parker’s latest casualty is Marcus Morrison, whom he TKO’ed in four rounds in November 2016 for his third successive title defense.

A win for Parker this weekend over John Ryder will almost certainly book him a massive bout against Canelo Alvarez for the undisputed world title showdown in the super middleweight division and determine the king of the 168-pound weight class.

Like Zach Parker, John Ryder also had a brief stint in the amateur ranks and only fought 35 times, winning 30 of them. His most notable amateur achievement was winning the ABA National Senior Novice Championships twice. In September 2010, Ryder made his professional debut and had a dream start by stopping Ben Deghani in the first round of their bout.

After this dream start to his professional boxing career, Ryder has stung up 16 consecutive wins from December 2010 to July 2013, including eight TKO/KO victories, to finally obtain his first minor title against Billy Joe Saunders in September 2013 as they battled it out for the British Boxing Board of Control Middleweight Title and the Commonwealth Boxing Council Middleweight Title.

Unfortunately, Ryder suffered a controversial unanimous decision loss to Saunders to come up short of a title and absorb his initial career defeat. The “Gorilla” quickly bounced back and won three straight times over Giorgi Kandelaki, Jez Wilson and Ruslans Pojoniseves, which opened another opportunity for a title against Theophilus Tetteh in October 2014 for the vacant WBO Inter-Continental Middleweight Title.

The Islington, London native seized the second chance and scored a fifth-round TKO win over Tetteh to capture his first minor title. Ryder immediately defended the title against Billi Facundo Godoy in January 2015 with a tenth-round TKO. Four months later, he faced Nick Blackwell for the vacant British Boxing Board of Control Middleweight Title, but he suffered a seventh-round TKO for his second career loss.

That setback didn’t deter him as the 34-year-old boxer won three straight fights over Adam Jones (in October 2015), Siarhei Khamitski (in January 2016) and Robert Talarek (in May 2016). These wins allowed him to win the vacant WBA International Middleweight Title over Khamitski. Ryder’s reign as the WBA Middleweight Champion was short-lived because Jack Arnfield snatched away the title with a unanimous decision triumph in September 2016.

The loss to Arnfield prompted Ryder to move up in weight and had a dream debut in the super middleweight division by winning the vacant IBF International Super Middleweight Title against Adam Etches in February 2017. However, he failed to sustain this momentum because he received another defeat, this time at the hands of Rocky Fielding, who bested him via split decision and won the vacant British Boxing Board of Control Super Middleweight Title in April 2017.

Following this defeat, Ryder scored four successive TKO/KO victories over Patrick Nielsen (in November 2017), Jamie Cox (in May 2018), Andrey Sirotkin (in October 2018) and Bilal Akkawy (in May 2019) to gain the opportunity for a major title fight with Callum Smith as he faced him in November 2019 for the WBA Super Middleweight Title and WBC Diamond Super Middleweight Title.

Sadly, Ryder again failed to realize a major title as he succumbed to a unanimous decision loss to Smith. His name in the division remained relevant as he currently rides a three-fight winning streak after beating Mike Guy in December 2020 (via unanimous decision), Josef Jurko in September 2021 (via fifth-round TKO) and Daniel Jacobs in February 2022 (via split decision).

On paper, the undefeated Zach Parker will have the edge over the veteran John Ryder as he holds the better record of 22 wins with no losses, while Ryder has 31 wins and five losses on his record. Parker will have the higher TKO/KO percentage at 73% compared to Ryder’s 47%. Additionally, the 28-year-old has the edge over the 34-year-old in terms of height (three-inch advantage, Parker stands at 6-foot, while Ryder is at 5-foot-9 ) and reach (two-inch advantage, Parker has 74 inches of reach, compared to Ryder’s 72 inches).

Stylistically, this will be in Zach Parker’s favor because he is not just the bigger and longer fighter among the two but also the power and speed advantage over John Ryder. Parker loves to throw power punches from both his hands, mainly hooks and body shots, while moving away from any possible counters with his improved head movement. Also, his orthodox stance could set up combinations against Ryder’s southpaw stance.

Meanwhile, Ryder leans more towards dirty boxing in the clinch and closes in the distance to throw punches at his opponents. This style allows him to neutralize any reach and height disadvantage from bigger oppositions. He fully utilizes this style to score and accumulate points en route to decision victories. However, he tends to leave himself open when closing the distance, which is the main reason he might lose this fight.

The 34-year-old drops his head while moving forward to close the gap between him and his foe before throwing a jab or his three-punch combinations. While this was effective in Ryder’s previous opponents, this will be perfect for Parker because he could throw his powerful uppercut and hooks to counter this attack from Ryder, and once it finds the target, it will be over another stoppage victory for the undefeated Zach Parker.