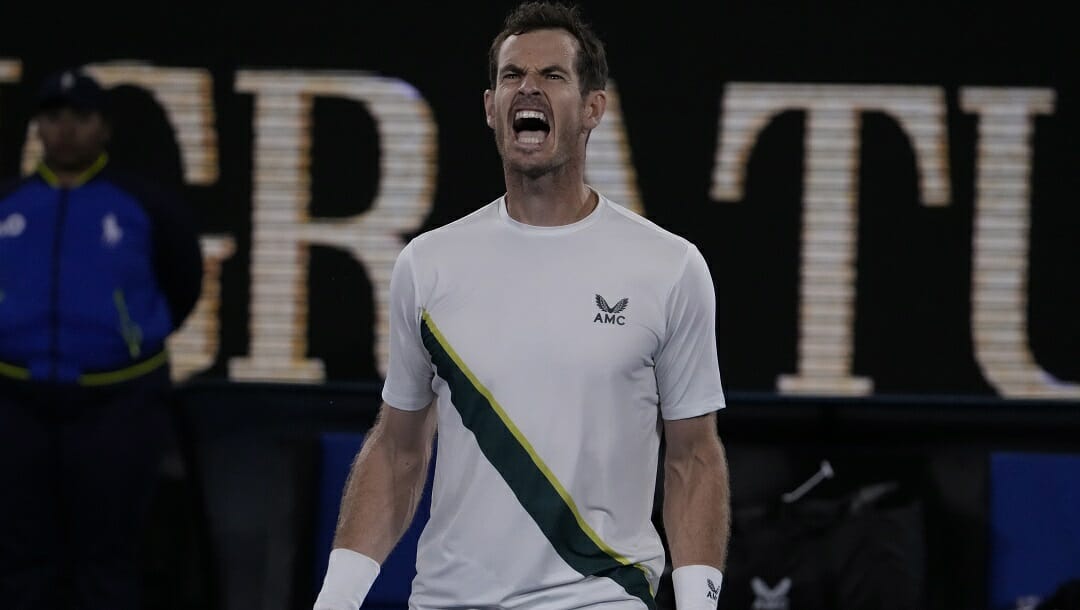 The great thing about men’s grand slam tennis is the extra drama that five sets can provide. Tennis odds are fundamentally different when players have to dig out three victorious sets instead of two.

On Thursday, the online sports betting world got yet another reminder of this with an incredibly memorable second-round match between the UK’s Andy Murray and Australia’s Thanasi Kokkinakis.

Tennis fans who tuned into the unassuming match at the bottom of the men’s draw earned a real treat on Thursday. Andy Murray – at one point down 4-6, 2-6, 0-2 – rallied for a truly stunning victory in a marathon match that ran past 4 AM local time.

Murray might be a three-time grand slam champion, but he is also a 35-year-old who’s dealt with chronic injury issues for quite a while now. The British legend was priced at +140 to beat Kokkinakis – a player ranked outside the ATP top 150.

Kokkinakis, for his part, was up a third-set break and only four games away from ousting Murray in straight sets.

But instead of cruising to victory, an epic point defense from Murray put him on tilt following the third game of the third set, and he choked away a massive lead. Murray ultimately won, 4-6, 6-7, 7-6, 6-3, 7-5.

Andy Murray’s epic comeback win against Thanasi Kokkinakis ran for five hours and 45 minutes, which is far and away the longest match of his career.

Though Thursday’s Murray vs. Kokkinakis match was excruciatingly long, it wasn’t quite the longest match ever played at the Australian Open. That honor belongs to the 2012 men’s championship round between Novak Djokovic and Rafael Nadal – an instant classic that ran for five hours and 53 minutes. Some tennis fans consider it the greatest match ever played.

For the longest professional match ever played anywhere, trek back to the 2010 Wimbledon men’s draw, when prime John Isner and Nicolas Mahut played their infamous five-set match that stretched on for 183 games. The full match clocked in at a monstrous 11 hours and five minutes and ran for multiple days.

Andy Murray should enjoy his epic win over Kokkinakis while he can, because it’s very likely that his Melbourne summer will come to an end with his next match.

No. 24 seed Roberto Bautista Agut is 21-11 at the Australian Open all-time and will present a stiff challenge for Murray. The BetMGM online sportsbook currently prices Murray as a +260 underdog.

Roberto Bautista Agut is currently the favorite to win the final quarter of the bracket at +275. No other seeded players remain in this portion of the draw.

I don’t begrudge bettors – especially those who aren’t used to betting tennis – for feeling a bit squeamish around betting juice like this.

However, for those with a bit of seasoning in the art of tennis odds, JJ Wolf presents a very interesting betting opportunity on Friday. The American is playing some of the best tennis of his career at the moment and hopes to reach the fourth round of a grand slam tournament for the first time in his career.

Standing in his way is another American, Michael Mmoh, who has been on quite the roller coaster ride over the past week. Understanding Mmoh’s journey in Melbourne is key to seeing why Wolf’s side has value.

Mmoh, who is ranked outside the ATP top 100, needed to earn his way into the Australian Open main draw by playing his way through the qualifying bracket. He lost his third qualifying match to Aleksandar Vukic, 4-6, 5-7.

However, Mmoh fell upwards into the main draw as a lucky loser because Belgian player David Goffin pulled out of the match. All of a sudden, Mmoh – who literally had already packed his suitcase and was preparing to leave the country – had a first-round date with another qualifying player: Laurent Lokoli.

Mmoh emerged victorious from the de facto qualifier battle. Next in the draw: No. 12 seed Alexander Zverev, who is still recovering and playing himself into shape after a serious injury during last spring’s French Open semifinals. Mmoh won, 6-7, 6-4, 6-3, 6-2.

If Mmoh’s draw had been almost anything else, he would almost certainly have been packing his bags for good. Instead, he drew a qualifier and a recovering star who isn’t anywhere close to proper tour form.

But luck won’t be enough for Mmoh in a third-round match against JJ Wolf, who is the vastly superior player right now. JJ Wolf’s implied odds to win this match from his -275 price is about 73%; I would make this price closer to -600.

That means that there’s quite a bit of value on Wolf here, despite the seemingly heavy price. I’d pony up and lay the big juice.

Want more tennis betting analysis? Don’t forget to subscribe to The Lion’s Edge for intelligent, weekly insights into trends and betting tips across the online sports betting world. It’s available on iTunes, Spotify, or wherever you listen to podcasts.

BetMGM is the premier online sportsbook for Australian Open odds each year!

Whether you’re a first-time bettor checking out tournament winner odds, a casual fan browsing live betting opportunities, or a seasoned pro building parlays, there are options for everyone.

Visit the sportsbook today to start betting on the Aussie Open!