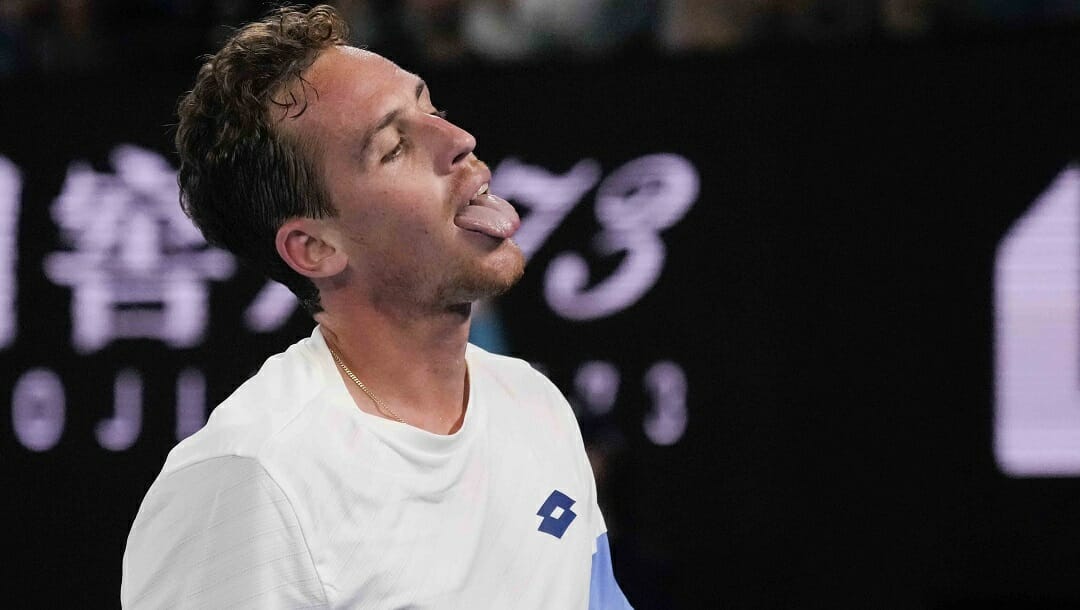 Nothing throws a wet blanket on a major tennis tournament like a downpour of literal wetness.

The Australian Open was forced to suspend many of its Day 2 matches on Tuesday because of a series of weather-related delays. That left anyone holding a ticket from the Australian Open odds market tapping their fingers in frustration.

Forget about wondering who won the 2022 Men’s Australian Open. How about we just figure out when this year’s tournament can resume, eh mate?

Why Is Play Suspended at the Australian Open?

Much of Day 2 at the Australian Open was suspended thanks to two consecutive extreme heat delays, followed by torrential rain soon afterward. Matches were suspended and pushed to Wednesday.

The concern with suspensions like what we saw on Tuesday is how it will affect the rest of the 14-day Australian Open tournament draw.

When large chunks of time are lost to weather, matches from later rounds get smashed into small time windows and fewer days. That’s particularly hard on the men, who can sometimes play five-set matches in back-to-back days, depending on how bad the delays are.

In 2019, the Australian Open revamped its heat policy in 2019. At the center of the current rule is the Australian Open Heat Stress Scale, which is a 1-to-5 scale that is meant to be a simple, accurate representation of how hot the play conditions are.

At a rating of 3, players are encouraged to take active cooling strategies throughout the game; at a rating of 4, match referees have the discretion to allow for extra rest time in between sets.

When the weather reaches a five on the scale, the heat index is likely in excess of 100 degrees Fahrenheit (38 degrees Celsius), and play is suspended.

The Extreme Heat Policy dates back to 1998, though the current rule set was overhauled just four years ago.

Somewhat amusingly, the Australian Open suffered from two different times of radical weather delays in the same day. Just hours after the Extreme Heat Policy was activated on Tuesday, Melbourne began suffering from extreme rain conditions, which further sidelined play on Day 2 of the Australian Open.

Tennis betting odds specialists are still working their way through some of the remaining first-round matches, thanks to Tuesday’s delays.

Nevertheless, the second round is right around the corner, with matches expected to begin on Wednesday and Thursday.

One of the spots I really like in the men’s draw is Corentin Moutet, taking aim at No. 28 seed Francisco Cerundolo.

Cerundolo, despite his nominal seeding, is a virtual pick ‘em against Moutet because he is primarily a clay court player. Prior to this year’s Australian Open, Cerundolo hadn’t won a hardcourt tennis match since the Miami Open in March 2022.

Moutet is a lower-rated player, but I believe there is a distinct reason this match is priced as a coin flip. Moutet is the better player on this surface and will outlast Cerundolo and advance to the third round.

Betting on the Australian Open is an amazing way to experience the two-week tournament each year!

With a variety of online sports betting markets, including tournament winner, match winners, live betting, and parlays, there’s entertainment for everyone. And BetMGM’s easy-to-use website and sportsbook app makes it easy for anyone to bet regardless of their sports betting expertise and tennis knowledge.

Get closer to the action today with update Aussie Open odds!