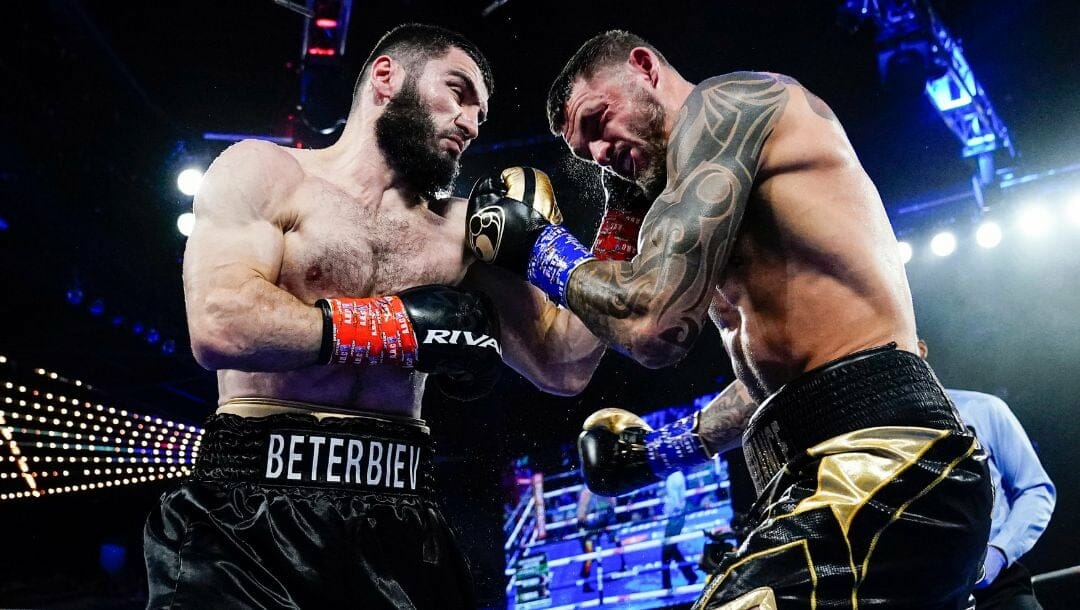 Artur Beterbiev (18-0) will be defending his IBF, WBC and WBO World Light Heavyweight Title against Anthony Yarde (23-2) this weekend inside the OVO Arena Wembley. It will be Beterbiev’s maiden title defense of all three belts after he captured the WBO Title against Joe Smith Jr. in June 2022. On the other hand, it will be Yarde’s second attempt to win a major boxing title.

The Russian-Canadian will come in as the heavy favorite in boxing odds at -800 against his British opposition, who is going to be the overwhelming underdog at +500. One of the primary reasons for this huge discrepancy in boxing betting odds is Beterbiev’s perfect record of 18 wins and 18 finishes, while Yarde has already sustained two losses in his 25-fight career.

Artur Beterbiev was an accomplished amateur boxer who competed and won multiple medals in various tournaments from 2006 to 2012. In June 2013, he made his professional debut and defeated Christian Cruz via a second-round TKO finish. Beterbiev quickly racked up four more wins with finishes over Rayco Saunders, Billy Bailey, Gabriel Lecrosnier and Alvaro Enriquez.

In his sixth professional fight, Beterbiev earned his first boxing title when he knocked out Travis Cloud in the second round to capture the vacant NABF Light Heavyweight Title. Three months later, in December 2014, he immediately added two more vacant titles, the IBF North American Light Heavyweight and WBO NABO Light Heavyweight, with his knockout finish of Jeff Page Jr.

Due to this impressive perfect undefeated campaign, the now-Montreal, Canada resident secured his shot at a major title in November 2017 when he was pitted with Enrico Koelling for the vacant IBF World Light Heavyweight Title. Beterbiev dominated Koelling en route to a late 12th-round knockout stoppage.

The Russian-Canadian wasted no time and defended the IBF Title twice against Callum Johnson and Radivoje Kalajdzic in October 2018 and May 2019 via fourth-round and fifth-round knockouts, respectively. This led Beterbiev to challenge Oleksandr Gvozdyk for the WBC World Light Heavyweight Title in October 2019 and win it via tenth-round TKO.

In 2021, the 38-year-old fended off two challengers, Adam Deines and Marcus Browne, with a tenth-round TKO finish of the former and a ninth-round stoppage of the latter to retain the IBF and WBC World Titles. Beterbiev’s quest to collect all the belts in his division continued in June 2022 when he fought Joe Smith Jr.

The showdown between Beterbiev and Smith Jr. saw the IBF, WBC and WBO World Titles on the line, and Beterbiev made sure to pick up his third major world title with a fantastic second-round TKO victory against the American. If Beterbiev defends his title against Yarde this weekend, a unification title showdown with WBA World Champion Dmitry Bivol is expected.

Anthony Yarde had a brief stint as an amateur, with only 12 fights under his belt, before turning professional in 2015. The British light heavyweight contender rapidly piled up ten wins, including nine TKO/KO stoppages. This incredible streak has opened the opportunity for Yarde to fight for his first minor boxing title.

Following his first taste of defeat, Yarde rebounded with successive TKO wins against Diego Jair Ramirez in February 2020 and Dec Spelman in September 2020 via second-round and sixth-round TKOs. At the tail end of 2020, the 31-year-old had the chance to reclaim the vacant WBO Inter-Continental Light Heavyweight Title, but Lyndon Arthur outpointed him via split decision.

After the close defeat from Arthur, Yarde fought Alex Theran in August 2021 and redeemed himself with a first-round knockout victory. Then, a year after their first meeting, Yarde challenged Arthur for a title rematch, and this time, he made sure not to leave the decision to the judges’ scorecards by knocking Arthur out in the fourth round.

Yarde’s latest victory came against Stefani Koykov in November 2022, where he collected another stoppage win with a third-round finish against the Bulgarian boxer. This upcoming fight against Beterbiev will be Yarde’s biggest fight to date as he can become a three-belt world title holder and potentially fight for a unification showdown.

Artur Beterbiev vs. Anthony Yarde: Tale of the Tape

It’s no secret that both Beterbiev and Yarde are two of the most hard-hitting boxers in the division, reflected through their TKO/KO percentage of 100% and 95%. The tale of the tape among them is almost identical, with a difference of only an inch in reach and half an inch in height. However, in terms of record, Beterbiev obviously has the better number.

Both are fighting out of the orthodox stance. Still, Yarde will have the speed advantage over Beterbiev as he is more light on his feet and moves more often to find angles in his punches. However, Beterbiev fights more technically than Yarde, as he makes his opponents crack under his forward-pressure approach.

Stylistically, Beterbiev finds his combinations through his power jab that makes his opponents backpedal into the ropes. Once they yield to his pressure, the Russian-Canadian will start to tear them apart with big loaded punches to the head and body. Additionally, he has improved his right hook punch, which floored Joe Smith Jr. during his last bout.

On the other hand, Yarde is a good counterpuncher who loves to circle around his opponents to find the perfect angle for his punches. Once he gets them hurt, he will march forward and pour on the power punches that he has. However, he tends to put his guard down, which can be costly against Beterbiev in this upcoming match.

Before they exchange punches this Saturday, you can check out their verbal exchange in the press conference, which went down on December 5, 2022.