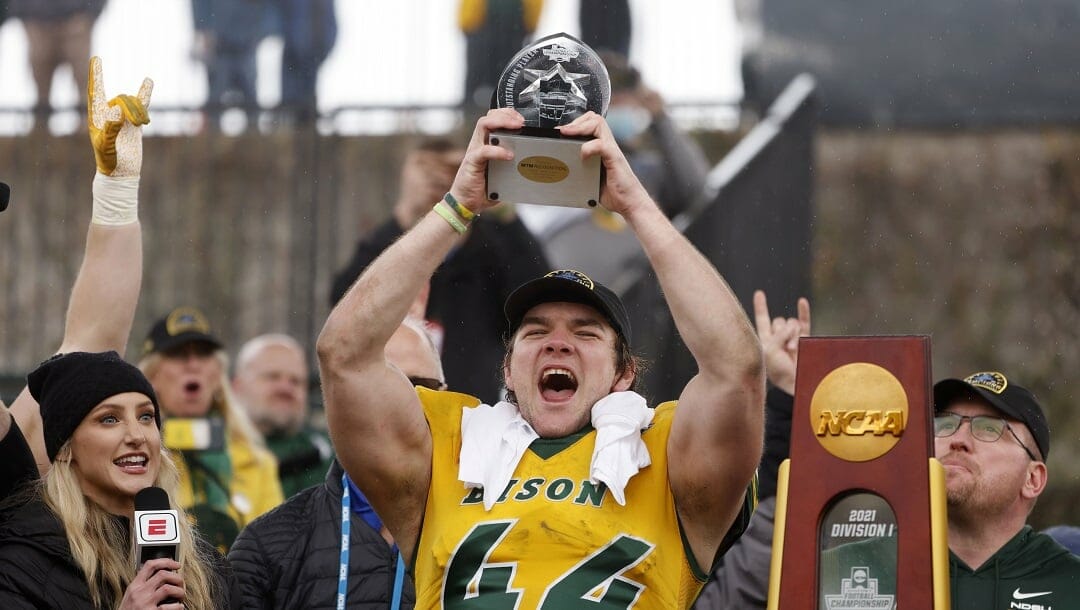 There are few college football betting markets I love more than FCS football.

That market will wrap up this weekend, one day before the FBS national title game, when archrivals NDSU and SDSU meet in Frisco.

South Dakota State is looking for its first national title since moving to the Division I level; North Dakota State can win its 10th title in 12 years.

For true football fans, this will be must-watch television. But before the game, let me attempt to answer the obvious: How should you bet on the FCS national championship game?

If you listened to my FCS playoff preview podcast episode of The Lion’s Edge with Sam Herder from HERO Sports, then you’re already set here.

In that episode, Sam and I were utterly shocked that North Dakota State – the reigning national champion and winner of nine of the last 11 championships – was being offered at +800 in the college football championship futures market for FCS football once the bracket was revealed.

To be sure, the Bison are down this year from their usual dominance. But their path to Frisco was still quite friendly, and the Fargo faithful travel extremely well. NDSU +800 seemed like an obvious initial position to establish.

If you did tail us on that, then Saturday’s title game is the easiest money you’ll ever make. Bet the South Dakota State moneyline at -210 and enjoy the game. You now have both sides and are guaranteed to win.

If you aren’t subscribed to Lion’s Edge and have no initial position to work off of, let’s get into the numbers.

As of Thursday afternoon, South Dakota State has been bet down to a 5.5-point favorite in Sunday’s championship contest.

SDSU -5.5 is the biggest point spread for either side in the rivalry since NDSU laid 10.5 in the playoffs during its undefeated 2018 season.

In a game that’s expected to be low-scoring and limited on total possessions, 5.5 points is a lot to afford a quality team like North Dakota State. That advantage is heightened because this is not only a rivalry game but will likely become one of the most intense iterations of the rivalry that has ever been played.

There’s also the value that’s been created on the NDSU side from market movement. Recall that this opened south of SDSU -3.

Finally, there are environmental factors to consider. Bison fans take a perverse pride in traversing the length of the United States to take over a small Dallas suburb in way-colder-than-you-would-think Texas temperatures every January.

Even the stadium seems biased against non-NDSU teams. You’d think Frisco would be a strictly neutral venue, but I’ve lost count of the number of times I’ve been at the game and watched the PA try to stir up a team’s fans while they were on offense. Strangely, this never seems to happen when the Bison have the ball.

Not a conspiracy guy, folks. Just an observer of events.

South Dakota State has won three straight, and I think they’re going to make it a third this weekend when the Jackrabbits (finally) win the championship that has eluded them. The market agrees with me since it’s been down on North Dakota State throughout the playoffs.

However, I can’t recommend laying this many points in these circumstances with the Jackrabbits. Giving up 5.5 in a low-scoring game feels too aggressive in this spot.

Even though I feel pretty strongly that South Dakota State will win, give me NDSU +5.5 in a pure point spread handicap with no previous positions.

ICYMI-Loved @GoJacksFB 's Reece Winkelman's honesty when I asked him after the game about playing NDSU (starts at 1:05 mark) for the FCS National Title. I would imagine the feeling was mutual in Fargo when they were watching SDSU-Montana State last week. pic.twitter.com/0tZLBjJYdP

Is the FCS Championship Game on TV?

Yes, the FCS Championship game will be broadcast on ABC Sunday afternoon.

What Time is the FCS Championship Game?

Betting on college football odds is a unique way to add more excitement each weekend.

From Week 0 through the College Football Playoff, you can view updated odds for hundreds of games, including spreads, over/under totals, futures and more.

Check out the online sportsbook today for updated football odds!