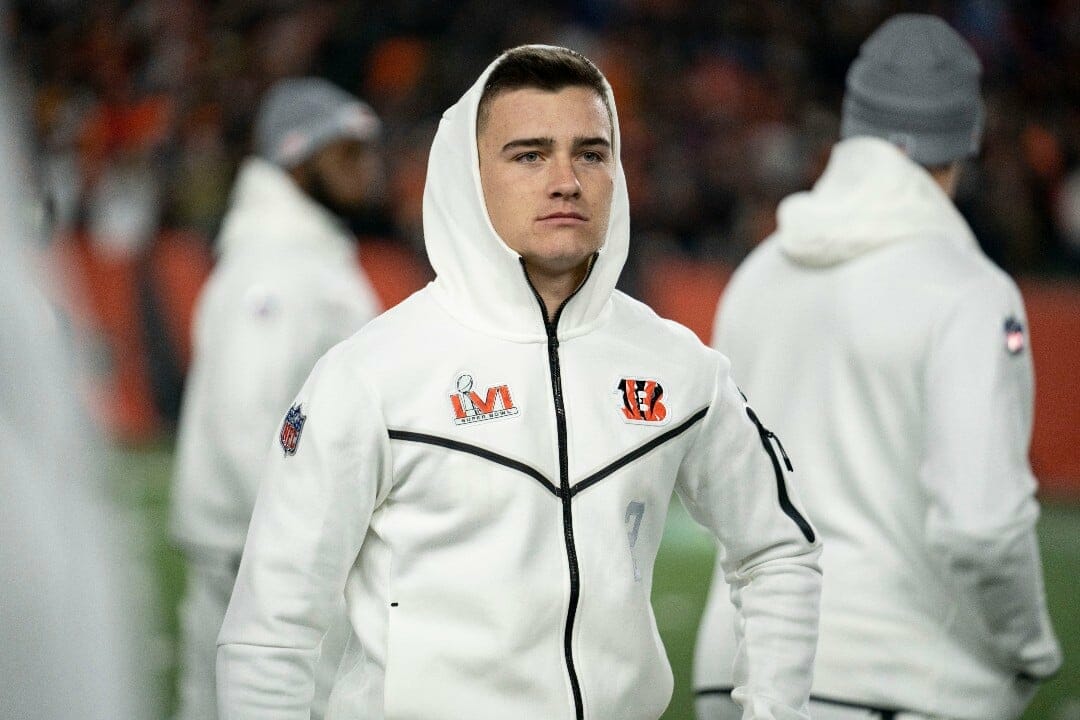 It takes confidence and skill to get to the Super Bowl, and Cincinnati Bengals placekicker Evan McPherson has plenty of both.

Super Bowl odds have the Bengals as underdogs, but this young squad pulled off stunning upsets in both the divisional round and conference championship. McPherson, who played a pivotal role in both games, could significantly influence Cincinnati’s success at Super Bowl 56.

First, here’s the critical information you need for the big game.

The young Bengals placekicker made an impression in his first three games. McPherson went 4-4 in field goals and 8-8 in extra-point tries.

In his first game, he hit a 34-yard field goal in overtime to beat the Minnesota Vikings 27-24. He was 16-17 in field goals in the last five games.

The Bengals sealed their first playoff appearance since 2015 in Week 17. Against the Kansas City Chiefs, McPherson kicked the game-winning field goal as time ran out.

Then, in three playoff games, he has hit 12-12 field goals. He needs two more in Super Bowl LVI to tie Adam Vinatieri’s record of 14 in the postseason.

The rookie placekicker has made three out of four field goals against the NFC West. In domed stadiums, McPherson is a perfect 4 for 4 in field goals and 2 for 2 in PATs.

The Cincinnati Bengals had the 13th-ranked ball control offense in the regular season, holding the ball for an average of 30:34. They’re also one of the best two-minute offenses in the NFL. In the final two minutes of the first half this season, Cincinnati has outscored their opponents 80-49. Yet, they ranked only 17th in red zone efficiency, scoring a touchdown on 59.62% of their visits.

The Los Angeles Rams are the 15th-ranked defense in points allowed. They rank 17th in yards allowed and eighth in red zone defense.

The Bengals will move the ball and get in McPherson’s range often. Because of the Rams’ ability to limit points in the red zone, he should get several opportunities to break Vinatieri’s record. McPherson has kicked at least two field goals in nine of his last ten games. He is 4-4 in each playoff game to date.

McPherson has incredible playoff stats and a personality for showing up at big moments, making his prop bets interesting.

Rams placekicker Matt Gay has a 94.1% success rate for field goals with 32 for 34 on the year, so both kickers should hit on their chances in Super Bowl LVI.

First, I’m taking the two specialists to combine for over five field goals at +275 on prop bets. Yet, because both these kickers are prolific, I also like the bet for both kickers to have over six FGs at +700 for this game.

Considering how the Bengals reached the Super Bowl, here’s one of my best NFL bets. The line on a Bengals’ overtime win is +2000 in prop bets. I like the value presented in this bet, as I believe McPherson will hit a game-winning field goal for the third time in three games.

Prop bets on kickers aren’t my favorite wagers during the regular season, but NFL bets become more intriguing during the Super Bowl. With Evan McPherson leading the way, I see the placekicker playing a critical role in the final score.

How many field goals do you think Evan McPherson will make on Sunday? Get a risk-free initial bet of up to $1,000 by creating a new account at BetMGM’s online sportsbook today and place your bets.