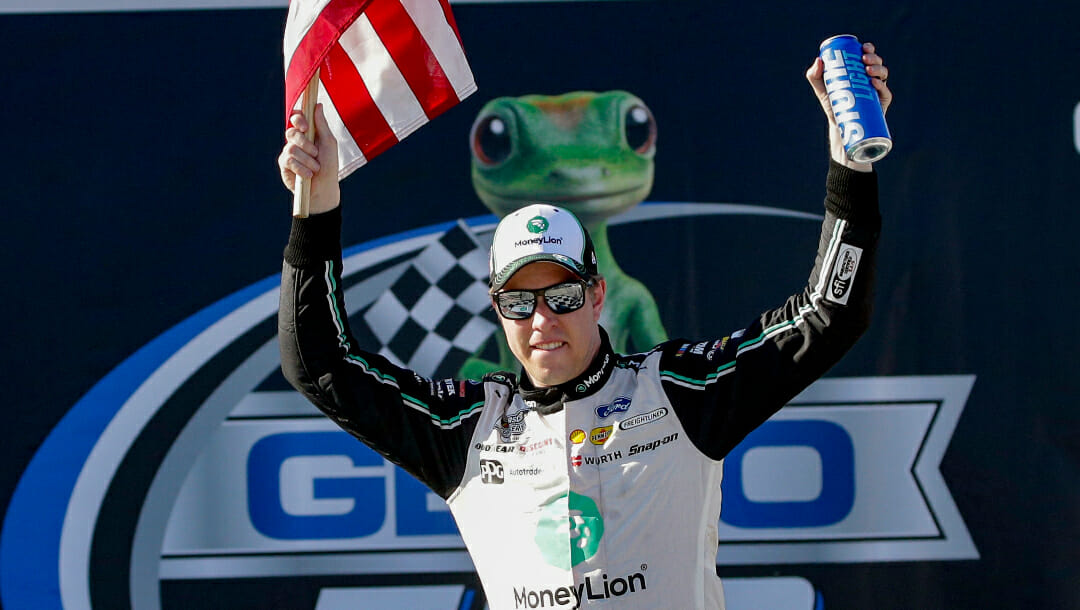 Brad Keselowski didn’t have to wait until the final lap of the 2021 GEICO 500 to take the lead.

“The whole race, I had a couple of opportunities to take the lead, but I just kept thinking, ‘Man, just keep your car in one piece till the end,’” Keselowski said after passing Matt DiBenedetto in overtime to tie Jeff Gordon for the most wins in race history (four) and Gordon and Dale Earnhardt Jr. for the most wins in track history (six).

“We’ve been so close here, and it just didn’t seem to want to come together here the last few years, and I’ve been on kind of a four-year drought here, but it’s nice to get number six,” Keselowski added, referring to six straight races at Talladega Superspeedway in which he finished outside the top 12, a period that followed three wins in his previous seven starts at NASCAR’s biggest and baddest track.

Among those three wins from October 2014 through October 2017 was a victory in the 2016 GEICO 500. And while it was Keselowski’s third win in race history, it was the 42nd time in race history (of 47 total) in which the previous year’s winner failed to defend his title.

Six years later, entering the 2022 race, only five of the 52 races have been won by the previous year’s winner, and 30 different drivers have won at least once, making it one of the most parity-filled Cup Series races over the last five decades. Only David Pearson (twice), Buddy Baker, Earnhardt Jr., and Gordon have won in back-to-back years.

In his three previous attempts at back-to-back wins, Keselowski finished 34th (2010), 15th (2013), and seventh (2017). If he bucks history with a win on Sunday, he must, at minimum, finish ahead of 2018 winner Joey Logano, whom Keselowski faces in a featured matchup in NASCAR betting at BetMGM:

Joey Logano is the favorite in race-winner odds, though this is the most crowded odds board through the first two months of the season. At +1100, as of Wednesday, Logano is tied with three other drivers with the best odds and narrowly ahead of four others at +1400, among them Brad Keselowski.

Logano leads all drivers in average rating (100.5) and laps led (150) at Talladega since 2019 but since six top-5 finishes in eight starts, including two wins, from October 2015 through April 2019, he’s struggled for consistent contention, posting just one top-10 finish in his last five starts.

The public likes Keselowski in race-winner betting –  only William Byron (16.5%) and Ryan Blaney (12.4%) have a higher handle share than Keselowski (7.5%) in race-winner odds – and against Logano in this featured matchup. Eighty-nine percent of the handle (from 57% of the tickets) are on Keselowski over Logano.

Reddick and his BetMGM-sponsored No. 8 Chevy are buried in race-winner odds (+2500) despite two straight seventh-place finishes at Talladega before a 39th-place showing at the 2021 YellaWood 500.

The BetMGM tickets are split 50/50 on Briscoe and Reddick but Reddick has 91% of the handle as he looks to finish ahead of Briscoe for the second straight Cup Series race.

Chase Elliott, winner of the 2019 GEICO 500, is the new No. 1 in Pat DeCola’s Power Rankings despite going winless in the season’s first nine races. He’s been inconsistent at Talladega but ranks fourth in laps led, fifth in average rating, and fifth in average finish at speedways (min. five starts) since 2019.

Elliott is an underdog to 2020 GEICO 500 winner Ryan Blaney, who enters the weekend with four straight top-7 finishes for just the second time in his career. Of the 23 drivers with six starts at Talladega since 2019, Blaney ranks first in wins (two), average finish (11th), top-20 finishes (five), and average rating (98.9).

The public’s love for Blaney in race-winner betting carries over to the head-to-head vs. Elliott. Blaney has 99% of the bets and 98% of the handle.

Before his win in the YellaWood 500 last October, Bubba Wallace had zero top-10s in 11 career NASCAR Cup Series and Xfinity Series starts at Talladega. Now, he’s a betting favorite (+1100) to join Blaney as the track’s only back-to-back winners since Gordon won the Aaron’s 499 and UAW-Ford 500 in 2007.

BetMGM bettors, however, are not buying Wallace to win the race – 20th in both tickets (1.8%) and handle (1.2%) – or finish ahead of Denny Hamlin, who’s dominating the featured matchup splits with 97% of tickets and 95% of the handle.

You can view updated GEICO 500 odds and more NASCAR odds at the BetMGM online sportsbook.