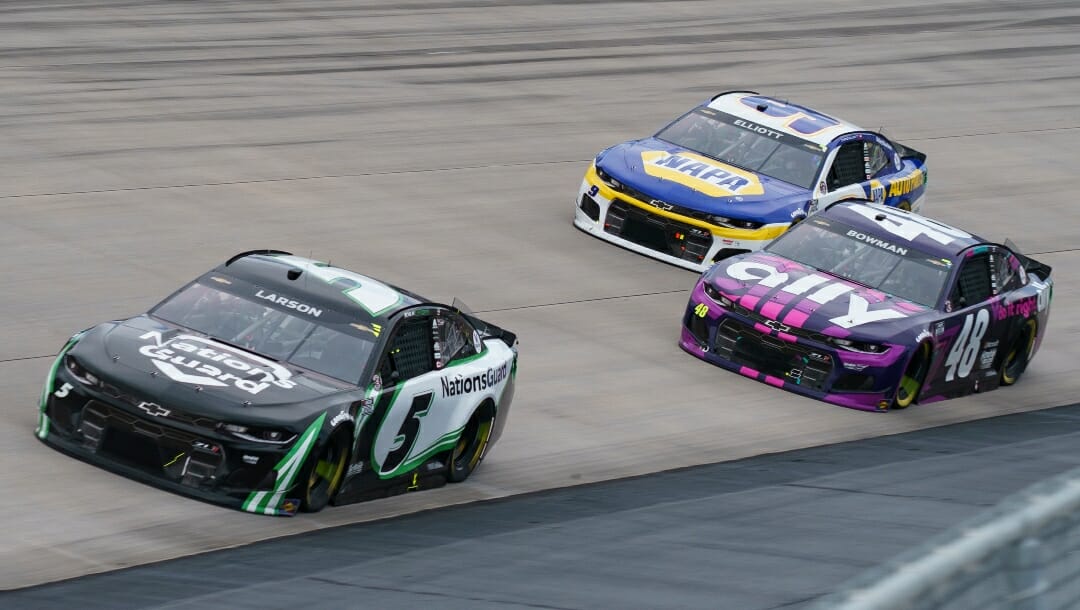 Jimmie Johnson’s crash on the 127th lap of the 2005 Ford 400 may have cost him a championship and may have prevented a top-four sweep from Roush Fenway Racing at Homestead Miami Speedway.

Johnson won a championship a year later – and six more in his career – but in 686 career NASCAR Cup Series races he never led a top-four sweep for Hendrick Motorsports, one of the rarest team feats in NASCAR history.

So it felt appropriate, if not sentimental, when his former team did accomplish the feat at the 2021 Drydene 400, the No. 48 Chevrolet was in front. And even though Alex Bowman was behind the wheel at Dover Motor Speedway, Johnson was still a factor in recording the fourth top-four sweep of all time and just the second since the 1950s.

“I asked [Johnson] what he does, how he approaches this place, what kind of lines he runs,” Bowman said after last year’s win, recalling a conversation with Johnson a few years ago when he was struggling at The Monster Mile. “I just stuck to that, and tried to run like Jimmie did, run the Jimmie Johnson line, and just be tight against the black, be super disciplined, super patient.”

Bowman grabbed the lead from teammate Kyle Larson midway through the final stage and led the final 98 laps en route to his first win in 11 career Cup Series starts at Dover. And if Bowman wins the newly named DuraMAX Drydene 400 presented by RelaDyne in consecutive years – something Johnson accomplished three separate times – he’ll do so as the Hendrick driver with the worst odds in NASCAR betting at BetMGM.

And all five of those drivers are included in a loaded slate of featured matchups at BetMGM:

William Byron will be one of the least-experienced drivers on Sunday – his seven Cup Series starts at Dover ranks 21st in the field – but he ranks sixth in average driver rating at Dover since 2019 and has back-to-back fourth-place finishes, including last year’s race when he registered 21 of Hendrick’s 382 total laps led.

Byron is currently less popular than Bowman with BetMGM bettors in race-winner betting – 3.4% of tickets and 5.3% of the handle to Bowman’s 8.4% and 9.8%, respectively – but Byron has 57% of the handle in their featured matchup.

Through the first two stages last May, it appeared Chase Elliott had the best chance of catching teammate Kyle Larson before he ultimately finished third.

It was his eighth top-five Cup Series finish and a nice rebound after a crash in the Drydene 311 nine months earlier. And only Bowman, Truex, and Kevin Harvick have more top-5 finishes than Elliott (three) at Dover since 2019.

But the public is more interested in Tyler Reddick; Reddick and the BetMGM-sponsored No. 8 Chevy are tied with Alex Bowman for the highest ticket share (8.4%) in race-winner betting and have 100% of the handle against Elliott in featured matchup betting.

No active driver has a better career average finish (seventh) at Dover than Kyle Larson, who has failed to finish in the top 10 of a Dover race only three times in 13 starts. He dominated most of the first 300 laps – leading 263  – last year before Bowman beat his No. 5 Chevy off pit road and never looked back.

Larson now returns to Dover one week removed from a “near-perfect” race at Talladega that ended with a fourth-place finish after a wild final lap. And he’s a massive favorite over last week’s winner, Ross Chastain, who now has a top-5 finish in eight of the last 10 races after starting the season 40th at Daytona and 29th at Fontana.

The public is buying redemption for Larson this weekend; the 29-year-old 17-time winner has a field-leading 13.4% of the handle to win at Dover. And he has 67% of the tickets and 70% of the handle over Chastain in this head-to-head.

Nonetheless, Harvick is buried at 10th in race-winner odds and an underdog to Truex in featured matchup betting as he struggles for consistency this season. And bettors are proceeding with caution on both drivers; Harvick and Truex rank eighth and 13th in race-winner ticket share, respectively, and 10th and 16th in handle share.

In the head-to-head matchup, Truex is dominating the action with 97% of tickets and 95% of the handle.