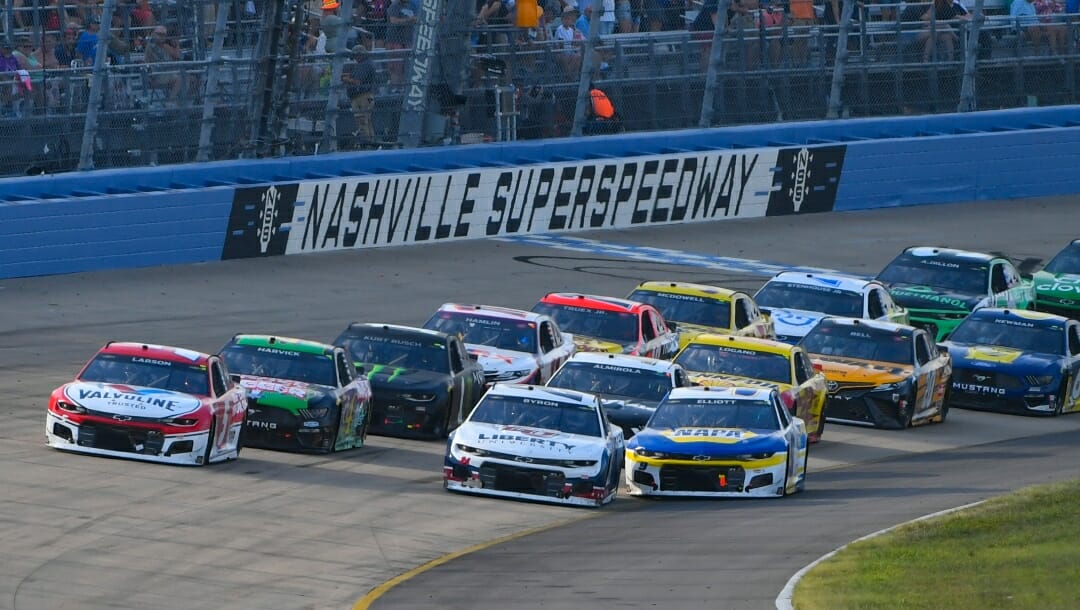 The 2021 Ally 400 might’ve been the first NASCAR Cup Series race in the Nashville metropolitan area in nearly 30 years – and the first as Nashville Superspeedway – but the 300-lap race had a familiar feeling as Kyle Larson dominated for his third straight Cup Series win.

The geographical and track familiarity now exists in a minimal form for the 2022 Ally 400, though there’s no competitive familiarity; Larson arrives with a 14-race winless streak as parity dominates the 2022 season.

In NASCAR odds at BetMGM, Larson (+225) led only nine drivers with odds better than +3000. And while he’s the favorite again this year, the defending Cup Series champion is only +500, 15 other drivers are better than +3000, and, as of Thursday, no driver has more than 7% of the race-winner ticket share.

“You give us a new car and limited practice each weekend, and it definitely opens the door of opportunity for a lot of guys to figure some stuff out, and some not to,” Ryan Blaney said prior to the Coca-Cola 600. “I don’t know if that will continue as the races and years go by with this car, but right now, it’s crazy.”

The parity has, in part, allowed Blaney to remain in contention for the points lead despite a winless first half. He’s one of 16 drivers with at least one stage win – with a Cup Series-leading four stage wins – and one of 33 drivers to lead at least one lap (385).

The latter group is led by William Byron, who, alongside Kyle Larson, highlights this week’s featured matchups at BetMGM:

After blazing through the practice sessions, the Hendrick Motorsports teammates raced in the top five almost the entire race last year. They’re back this year as Byron seeks to become the first Cup Series driver with three wins.

Byron’s lone top-10 finish since his win in the Blue-Emu Maximum Pain Relief 500 was two weeks ago at Sonoma (ninth) but, like Blaney and others, has remained in contention entering the second half.

Neither Tyler Reddick nor Austin Dillon has fared particularly well at superspeedways in recent years. Since 2019, the pair ranks 30th and 18th, respectively, in average driver rating. Both, however, finished in the top 20 at Nashville last year and Reddick has already set career-highs for season top-three and top-five finishes in 2022.

Ross Chastain never truly threatened Larson last June and finished more than 4 seconds behind but still earned his first career second-place finish. And, with two wins and four more top-3 finishes already in 2022, the 29-year-old former short-track prodigy is having a sensational season.

Prior to his win at Talladega in April, Chastain struggled at superspeedways. He had just two top-10 finishes and 26 total laps led in 14 starts. Now, the No. 1 Chevy routinely sits among the betting favorites – and the public favorites, as he is this week with the fifth-highest ticket share (4.2%) – regardless of the track.

Chastain has 80% of the tickets and 90% of the handle against Suárez, who just zero career top-10 Cup Series finish at superspeedways.

Kevin Harvick’s frustrating 2021 season included a fifth-place finish – one of 24 top-10s in a winless season – at Nashville, where he won with Richard Childress Racing in the Xfinity Series in 2007.

Neither Harvick nor Aric Almirola is a popular public pick this week – combined 3.5% of the race-winner handle – and their featured matchup is a 50/50 split in tickets.

You can view updated Ally 400 odds and more NASCAR betting odds at the BetMGM online sportsbook.