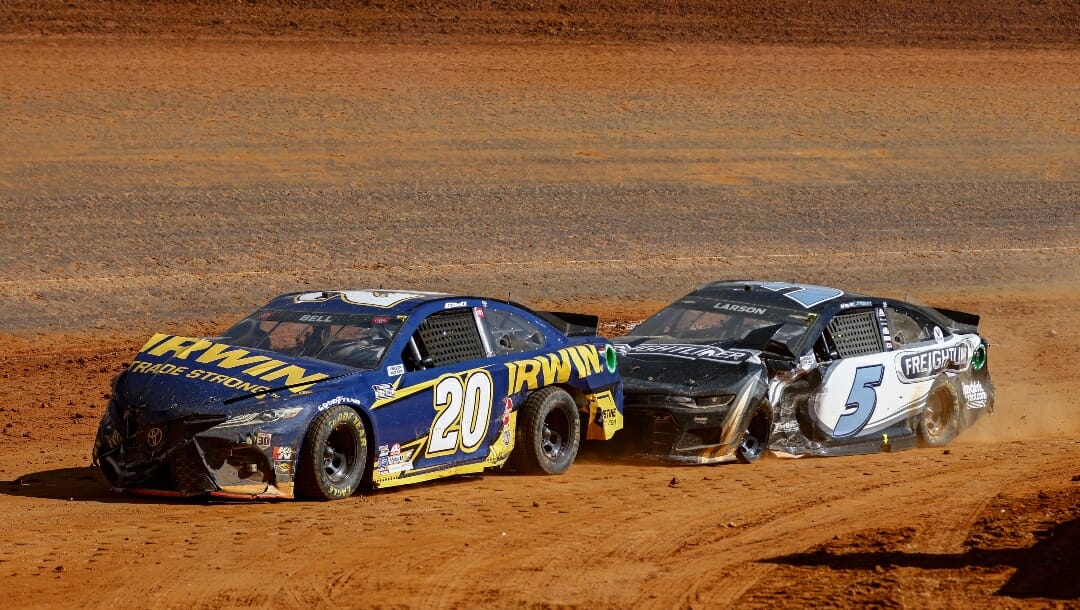 Christopher Bell was five weeks removed from his first career NASCAR Cup Series win – the 2021 O’Reilly Auto Parts 253 – when he arrived at Bristol Motor Speedway in March 2021 for the first Cup Series dirt race since 1970.

He was a three-time Chili Bowl Nationals champion who won at Eldora Speedway in his third career Camping World Truck Series race and was one of the most experienced dirt-track drivers in the 39-car lineup for the 2021 Food City Dirt Race.

That was enough for BetMGM oddsmakers to place Bell in front of 37 of the other drivers in NASCAR odds.

At +800 to win – his best odds ever entering a Cup Series race – he was well below the favorite, Kyle Larson (+280), but it was still a resounding vote of confidence for the then-26-year-old with only 42 career Cup Series starts. Those starts were less than 10% of several others beneath him on the odds board, including Denny Hamlin, Martin Truex Jr., and Kevin Harvick.

And for 52 laps at the World’s Dirtiest Half-Mile, Bell delivered on the hype; he was running second behind Truex midway through Stage 1 before spinning out, leading to a 34th-place finish.

Despite the result, oddsmakers and the public evidently saw enough to deliver another vote of confidence this year.

Once again, Bell sits behind Larson at +800, the second-best odds on the board as of Wednesday, though the gap is more narrow; Larson is +450 one year after his No. 5 Chevy was damaged in Bell’s wreck and finished 29th.

“I passed Joey Logano early in the race last year before I spun out,” Bell told the Johnson City Press, referring to an early pass of Logano, the eventual champion. “That’s good to have that confidence in my head. All the dirt racers, we got a lot of them in the Cup Series now. So it’s not going to be an easy race by any means.”

Bell, Larson, and Logano are included in BetMGM’s featured matchups this weekend in the Food City Dirt Race:

Kyle Larson dropped four spots to a season-low sixth in this week’s NASCAR Power Rankings after a 19th-place finish at Martinsville, his fifth finish outside the top 15 in the last six races.

Larson, a two-time Chili Bowl Nationals champion, gets another crack at the Bristol dirt this weekend and must, at minimum, finish ahead of Bell to earn his second win of the season.

And many BetMGM bettors believe that’ll happen; as of Wednesday, Larson has the highest ticket (11%) and handle shares (22.4%) to win the race and 97% of tickets and 96% of the handle in the head-to-head against Bell.

Joey Logano won Stage 2 last year en route to his lone win of 2021 and just his second win since early 2020. And after relishing the uniqueness and nostalgia of winning the first Cup Series dirt race at Bristol – his third career Cup Series win at Bristol – he returns with hopes of becoming the ninth different driver to win the 62-year-old race in back-to-back years.

For what it’s worth, Logano ranks sixth in top-5 finishes, seventh in laps led, and fifth in wins at Bristol among active drivers. He’s had significantly more success at the iconic track than his head-to-head opponent this week, Martin Truex Jr., who was in position for his first Bristol win (in 31 career starts) at last year’s race before a late flat tire.

William Byron became the year’s first multi-win driver with last weekend’s triumph at Martinsville and now sits a career-high third in the NASCAR Cup Series standings, just nine points behind Ryan Blaney and 12 points behind Chase Elliot. And his bid for a second straight win will include a dirt warmup on Thursday in Kyle Larson’s Late Model Challenge at Volunteer Speedway.

Alex Bowman, meanwhile, is seeking seventh straight top-15 finish since opening the season 24th at Daytona and 25th at Fontana. And with a win, he’d join Byron as the only drivers with multiple wins this season.

The public isn’t convinced of that happening, though; Bowman has only 1.5% of tickets and 1.4% of the handle in race-winner betting and barely any action against Byron in this featured matchup. Byron is dominating both tickets (98%) and handle (99%).

Pulling double dirt duty last year, Chase Briscoe finished 20th in the Food City Dirt Race and fifth in the Pinty’s Truck Race on Dirt. The former teenage dirt-track superstar won’t be behind the wheel of Roper Racing’s No. 4 Ford truck this year, but he will be behind the wheel of his No. 14 Ford on Sunday in search of his second win this season.

Only Larson, Bell, and Chase Elliott have a higher share of the race-winner handle than Briscoe (5.6%). Daniel Suárez, however, has 72% of the handle (on a 50/50 ticket split) in their head-to-head.