NASCAR Betting: ‘THE CHUTE IS BACK’ at Sonoma for Toyota/Save Mart 350 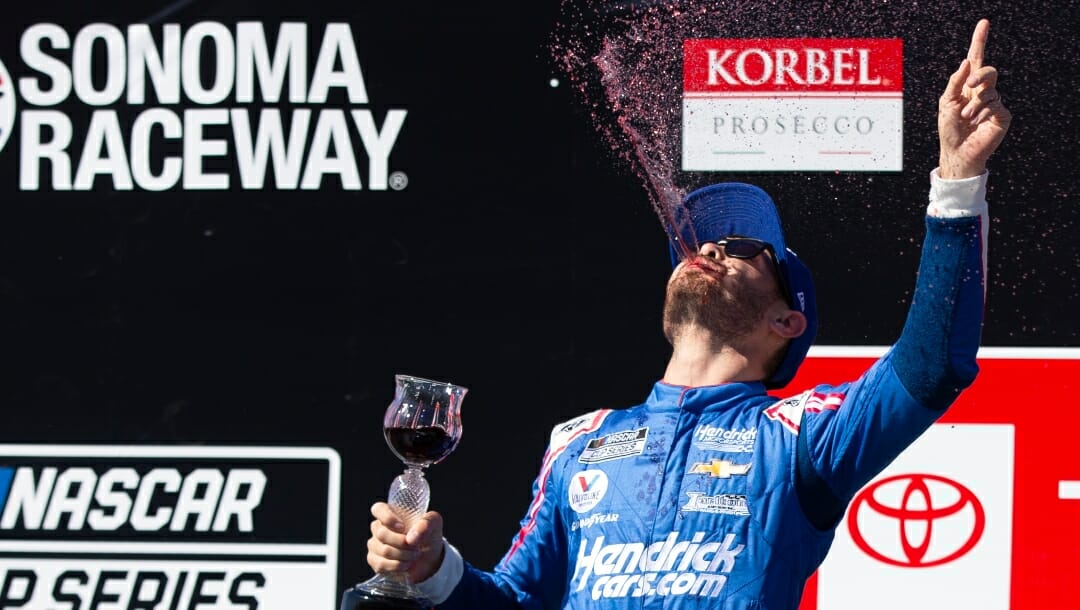 “THE CHUTE IS BACK!” Sonoma Raceway announced on Twitter in January, ending a three-year, two-race fling with the carousel at the Toyota/Save Mart 350.

The decision was greeted with overwhelming approval – a “Massive W.,” proclaimed Charlotte Motor Speedway – and understanding, including from last year’s champion Kyle Larson. But it would’ve been fair if Larson decried the change after years of frustration at the road course.

“It will be more exciting for the fans just because those are a couple of wild corners with some new hairy passing zones,” Larson said in January. “Mistakes can be made in those corners when you’re bouncing over curves so the cars will be moving around a lot. It will be exciting. It will be pretty wild because you can go all the way to exit of Turn 4 on the other side of the curve and barely miss the wall.”

Larson led 57 laps last June en route to his first career NASCAR Cup Series road-course win. In five previous Sonoma starts with the carousel out of Turn 4, the Northern California native led 11 total laps, never finished better than 12th, and only twice had a driver rating of at least 86 – he had 149.2 at last year’s race.

Larson is now chasing back-to-back wins in the same Cup Series event for the second time in his career; he won the Pure Michigan 400 in 2016 and 2017. But he’s not the betting favorite to do so.

Denny Hamlin is the only other driver with an average road-course finish better than 10th since 2019 (9.6) and finished second, fourth, and 10th in the three most recent Sonoma races with the carousel (2016-18). To win his first race at the 54-year-old track, he must, at minimum, finish ahead of Ross Chastain, whom he faces in one of the featured matchups at BetMGM:

Ross Chastain has cooled off after two wins and five more top-3 finishes over a nine-week period. But the 29-year-old and his No. 1 Chevy still have two top-10s in the last three weeks and is one good race away from jumping Kyle Busch and Chase Elliott in the Cup Series standings.

Chastain has started only two Cup Series races at Sonoma – finishing 33rd in 2019 and seventh in 2021 – to Hamlin’s 15 starts but is a sizeable favorite over the 2016 second-place finisher.

Neither Chastain nor Hamlin is popular picks to win on Sunday. They rank 10th and 13th in ticket share, respectively, and rank seventh and sixth in handle share. In their head-to-head matchup, Chastain is dominating the tickets (97%) and handle (94%).

Joey Logano jumped to a season-high No. 2 in Pat DeCola’s NASCAR Power Rankings after Sunday’s win in Illinois. And DeCola teased, “perhaps a second win in a row this weekend” as Logano seeks road-course consistency.

He won at Watkins Glen in 2015 and had six straight top-10 finishes from late 2019 through mid-2021, the last of which was a fourth-place run at Sonoma. It was Logano’s second-best career finish at the track and best since 2016.

Bettors love Logano in this matchup; he has 87% of the tickets and 90% of the handle against Busch.

Two and a half months after losing an epic final-lap battle to Chastain (and Alex Bowman) at the EchoPark Texas Grand Prix, A.J. Allmendinger is back on the road and making his seventh Cup Series start after only five total starts all of last year.

Prior to his 33rd-place finish at COTA – following 38th in the Bank of America ROVAL 400 last October – Allmendinger never had back-to-back road-course finishes of 30th or worse. He’s looking to avoid a third straight and earn his first win since the Verizon 200 last August.

Allmendinger’s race-winner odds have jumped from +1200 at open to +900 as of Wednesday morning as the public pounds him with a staggering 24.2% ticket share and 38.4% handle share. If those hold, it will be the biggest ticket and handle shares for any driver this season.

Against Austin Cindric in the featured matchup, however, Allmendinger is receiving only 20% of the handle (on 75% of tickets).

Neither Christopher Bell nor Chase Briscoe contended at Sonoma last year – the first career Cup Series start at the track for both drivers – but Bell has one career road win (2021 Daytona) and they’ve combined for eight top-10s since 2021.