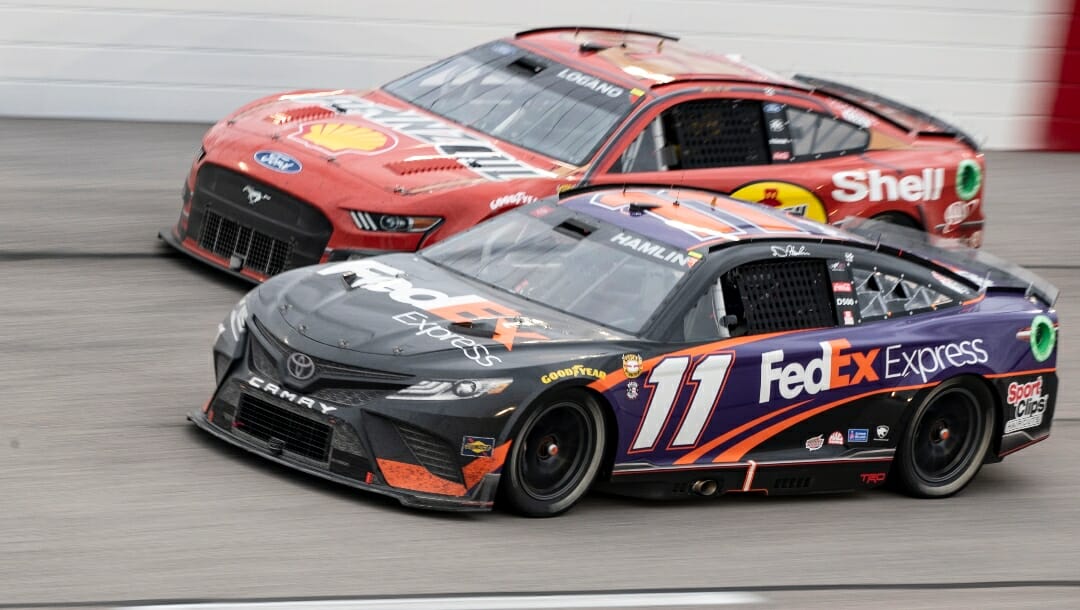 That’s not enough to be the favorite this weekend.

As of Thursday, Hamlin is +700 in race-winner odds at the BetMGM online sportsbook for the Cook Out Southern 500, just behind Kyle Larson (+600) and just ahead of a quartet of drivers at +800.

It’s a similar position for Hamlin; he was +700 to win the Goodyear 400 at Darlington in May, tied with Martin Truex Jr. and just behind Larson (+500).

However, Hamlin is a more popular pick this weekend than in May.. He had approximately 4% of the race-winner handle for the Goodyear 400, but now has more than 12% of the handle for the Cook Out Southern 500.

Hamlin was frustrated upon his arrival at the Goodyear 400; he had four straight finishes outside the top 15 and just one top 10 – a win in the Toyota Owners 400 – in the season’s first 11 races. The 48-time winner on the NASCAR Cup Series likened the issues to a “coyote [that] gets the anvil dropped on its head,” while conceding the frustration has simplified his team’s strategy.

“We go for playoff points only,” Hamlin said. “So when you see the field start splitting because they want stage points or whatever, you know where the 11 stands from this point on. We’re trying to get five points at the end of the race and two for the playoffs during stages.”

Hamlin finished 21st in the Toyota Owners 400 but earned 27 points, which proved pivotal en route to his 16th career playoff appearance. His 15th appearance began with a win; exactly one year ago, he snapped a 31-race winless drought by winning the 2021 Cook Out Southern 500.

If Hamlin goes on to defend his win at The Lady in Black, he must, at minimum, finish ahead of Chase Elliott, whom he faces in a blockbuster featured matchup in NASCAR betting:

Denny Hamlin has more wins at Darlington than Chase Elliott has top-5 finishes (three). And Elliott has finished 20th or worse more times in his last five starts (three) at the track than Hamlin has in 20 career starts (two).

However, Elliott is the regular-season points champion with a Cup Series-high four wins and has been a popular pick among bettors all season. And he’s a popular pick this weekend, again; his race-winner ticket share (7.2%) ranks second to only Kevin Harvick (11.1%), and handle share (8.5%) ranks fourth.

Elliott is also dominating featured matchup betting over Hamlin; he has 96% of the handle on 75% of the tickets.

After sneaking into the top 16, Austin Dillon returns to a track where he’s never won and never led a lap in 12 starts but ranks fifth among active drivers in average finish (11.9). And among drivers with at least 10 starts at the track, he’s only behind Chris Buescher and Landon Cassill in start-to-finish improvement (+3.8).

The public isn’t buying Dillon to win – he’s tied for the 16th-highest ticket share (2.5%) and 22nd-highest handle share (1%) – nor finish ahead of Austin Cindric. Dillon has just 7% of the tickets and 5% of the handle in the featured matchup.

Kyle Larson is the betting favorite –  one year removed from a five-start stretch at Darlington with four top-3 –  but Kyle Busch is the veteran. This will be his 22nd start at the track, second to only Kevin Harvick (30) among drivers in the field this weekend.

Larson and Busch have a 50-50 ticket split in featured matchup betting, but Larson’s 50% equates to 88% of the handle.

Tyler Reddick finished second at the Goodyear 400, his first top-5 in six career Cup Series starts at the track – though he did have third- and second-place finishes in the Xfinity Series in 2018 and 2019, respectively.

His Southern 500 featured matchup opponent Kevin Harvick leads in both race-winner ticket share and handle share (17.7%), and has 71% of the handle (on 77% of the tickets) in the matchup.

You can view updated Cook Out Southern 500 odds and more online sports betting, including parlays and live betting, at BetMGM.