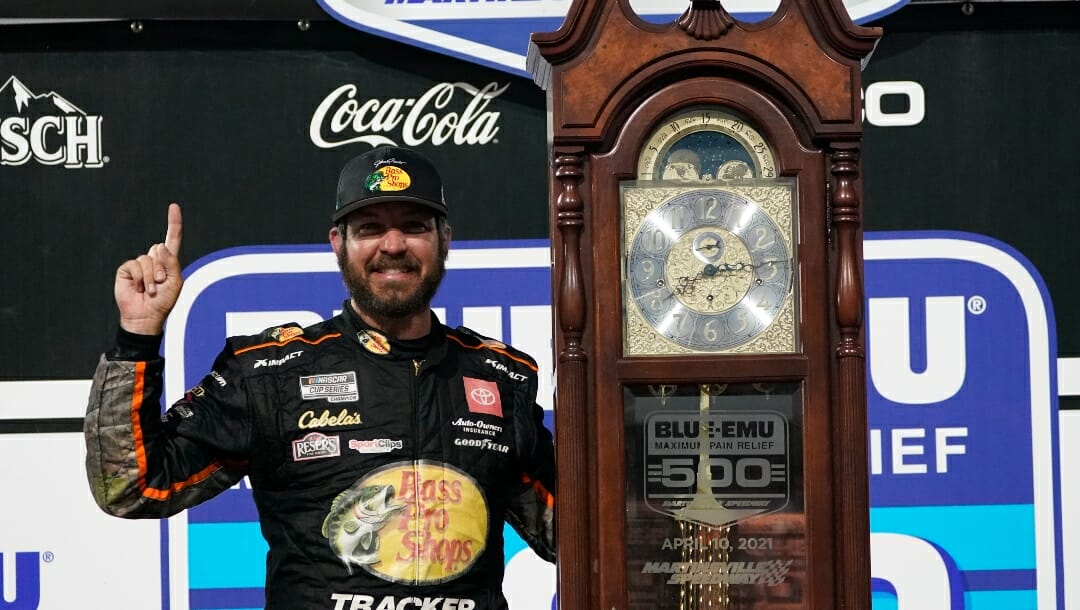 When William Byron’s crew chief Rudy Fugle opted against a late pit last weekend at Richmond, Byron knew pushing the tires on his No. 24 Chevrolet to approximately 100 miles was a gamble.

The gamble, however, was his only option in attempting to hold off Martin Truex Jr. in, to the best of his knowledge, a two-man race over the final 20 laps in the Toyota Owners 400.

“I thought there at the end when they told me that I was just racing the 19. ‘I’m like okay, I got him,’ ” Byron said of Truex. “[B]ut the 4 [Kevin Harvick] and the 11 [Denny Hamlin] were on a totally different planet. Just part of it. Different tire strategies and it didn’t work out.”

What Byron believed was a two-man race was actually a four-man race as both Hamlin and Harvick passed him in the final laps en route to a fourth-place finish as he failed to become the first driver with two NASCAR Cup Series wins this year.

“We just needed five less laps,” admitted Byron. “It didn’t quite work out there. There were times when lappers were passing me, it got me out of shape, especially if they got to me on the corner exit. It would really get me out of shape. I had to manage the throttle so much. I was only quarter throttle so as soon as I would slip up it was game over. Just trying to keep that pace, I thought we did probably the best job we could.”

One week later, 180 miles southwest at Martinsville Speedway, Byron and Truex will battle in a two-man race … at BetMGM.

Truex vs. Byron is among the blockbuster featured matchups at BetMGM for the Blue-Emu Maximum Pain Relief 400, which Truex is attempting to win for the third straight year.

Prior to Truex’s first win (in 2020) at the shortest track on the Cup Series circuit, no driver had won the race’s grandfather clock in back-to-back years since Rusty Wallace won four straight from 1993-96.

Here’s a look at Truex vs. Byron and the other featured matchups for NASCAR betting at the BetMGM online sportsbook:

For more than two decades, parity ruled the Blue-Emu Maximum Pain Relief 400. Sixteen different drivers won in the 23 years between Wallace’s four-peat and Truex’s win in 2020.

Now, Truex is on the verge of ruling the race as he seeks a third straight win and fourth overall win at Martinsville in the last three years. Through his first 18 career NASCAR Cup Series races at the track, Truex had only four top-10 finishes and never finished higher than fifth. In his last 14 races, he has 11 top-10 finishes, including the three wins and two more second-place finishes.

Byron, however, is dominating the featured matchup betting. At +140 to finish ahead of Truex, Byron has 75% of the tickets – the highest ticket share of any matchup at BetMGM – and 90% of the handle.

“You’ve got to figure out how to lead the last lap, that’s pretty much all that matters,” Hamlin said after surrendering a late lead at the 2021 Toyota Owners 400 en route to a fifth-place finish at his hometown track, the eighth of nine straight winless starts at his hometown track.

The Chesterfield, Virginia, native expressed similar frustration throughout the first two months of this year as he posted zero top-10 finishes through six starts, the second-longest top-10 drought of his 18-year Cup Series career, and lamented missed late-race opportunities.

He seized the opportunity on Sunday at Richmond and now is looking to win back-to-back races for the first time since June 2010. To do so, he must conquer a track he once dominated and, at minimum, finish ahead of Chase Elliott, who has the second-highest driver rating at Martinsville since 2019 (116.4).

Busch is tied with Hamlin and Ryan Blaney for the second-best race-winner odds but, with only 5.1% of tickets (eighth-most), most bettors aren’t buying him and/or his value at +800. And they’re not buying him against Kyle Larson.

Larson has only two career wins in 44 short-track starts but has been in contention more often than not, including a fifth-place finish one year ago at Martinsville. The ticket share is split 50/50 but Larson has 91% of the handle in this featured matchup.

Ryan Blaney didn’t earn his first win of the season last weekend at Richmond but, in leading 129 laps and posting a fourth top-10 finish, he did earn a spot beside Chase Elliott atop the points standings for the first time in his Cup Series career.

“The No. 12 Ford has been the fastest car this season, and Blaney is one streak of dominance away from being the championship frontrunner,” Pat DeCola wrote in placing Blaney atop this week’s Power Rankings.

The sportsbook responded to another strong race by giving Blaney his best odds of the season (+800), which bettors are pounding to the tune of a 13.9% handle share, third-highest to only True and Hamlin. Against Ross Chastain, one of the least-experienced short-track drivers in the field, however, Blaney has just 18% of the handle.