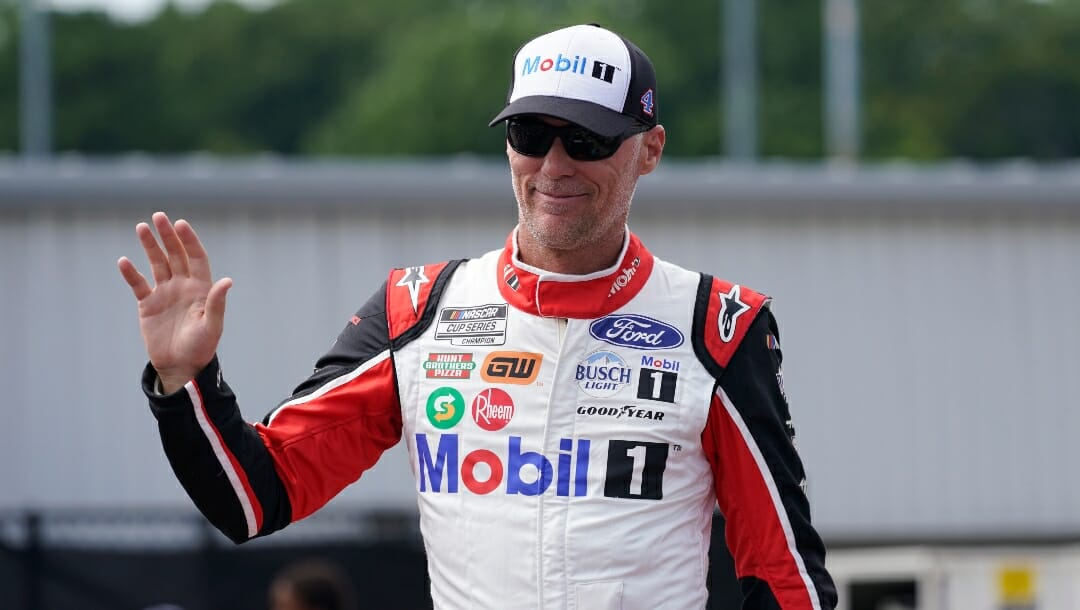 Kevin Harvick is no longer chasing a playoff spot entering the penultimate race of the 2022 NASCAR Cup Series. He’s now chasing history, though oddsmakers and the public aren’t giving the No. 4 Mustang a vote of confidence in NASCAR betting.

In holding off Christopher Bell to win the Federated Auto Parts 400, Harvick won consecutive Cup Series races for the eighth time in his 22-year career.

Two in a row to make it 60 career wins for @KevinHarvick.

Congratulations to The Closer on this milestone. pic.twitter.com/SXdJlqrRjn

In the fifth instance of winning consecutive races – the Folds of Honor QuikTrip 500 and Pennzoil 400 in early 2018 – he won a third straight race, the 2018 TicketGuardian 500, to become the 14th different driver to win three straight Cup Series races in the modern era (since 1972).

Only nine of those drivers have won three straight races multiple times, most recently in 2021 when Kyle Larson joined Dale Earnhardt as the only drivers with three consecutive wins twice in one season.

If Harvick wins the Go Bowling at the Glen on Sunday, he will become just the 10th driver in 51 years of NASCAR’s modern era with multiple three-race winning streaks. And if he does win at Watkins Glen International, he’ll arrive at the Coke Zero Sugar 400 next weekend aiming to join only eight drivers with four straight wins.

Nearly 95% of the tickets at BetMGM are betting against that.

For Harvick to win a third straight race, he must, at minimum, finish ahead of Ryan Blaney, against whom he’s a sizable underdog in featured matchup betting at BetMGM:

The last time Harvick entered this race after a win the previous week (2003), he finished fifth in the third of 20 career NASCAR Cup Series starts at Watkins Glen, tied with Kurt Busch for most among active drivers. But he ranks fifth in top-5 finishes, sixth in laps led, and sixth in average finish (minimum of five starts).

Chase Elliott has cooled since his 1-2-1-2-1 run from Nashville to Pocono but remains a heavy favorite in NASCAR Cup Series championship odds at +300. No other driver is better than +800.

Despite the 19th-most career starts at Watkins Glen, Elliott is tied with Kyle Busch for the most wins (two) and ranks second to Busch in laps led (141). He most recently finished second in last year’s Go Bowling at the Glen, which was the first Cup Series start for Tyler Reddick at the track.

Elliott has 94% of the handle against Reddick, who has one career Cup Series start at Watkins Glen.

Neither Chris Buescher nor Michael McDowell has done anything of note at Watkins Glen. In 18 combined starts, they have zero wins, zero top-10 finishes, zero laps led, and average finishes of 21.3 (Buescher) and 27.4 (McDowell).

That isn’t scaring off oddsmakers; neither driver is among the favorites, but neither is buried alongside Kyle Tilley, Mike Rockenfeller, and others in the +10000 cellar. Buescher is tied for the 11th-best odds (+2000), while McDowell is tied for 17th (+3300).

And Buscher is getting public love to both win the race – third-highest handle at 6% – and defeat McDowell – 97% of the handle.

You can view updated Go Bowling at the Glen odds and more online sports betting opportunities at the BetMGM online sportsbook.