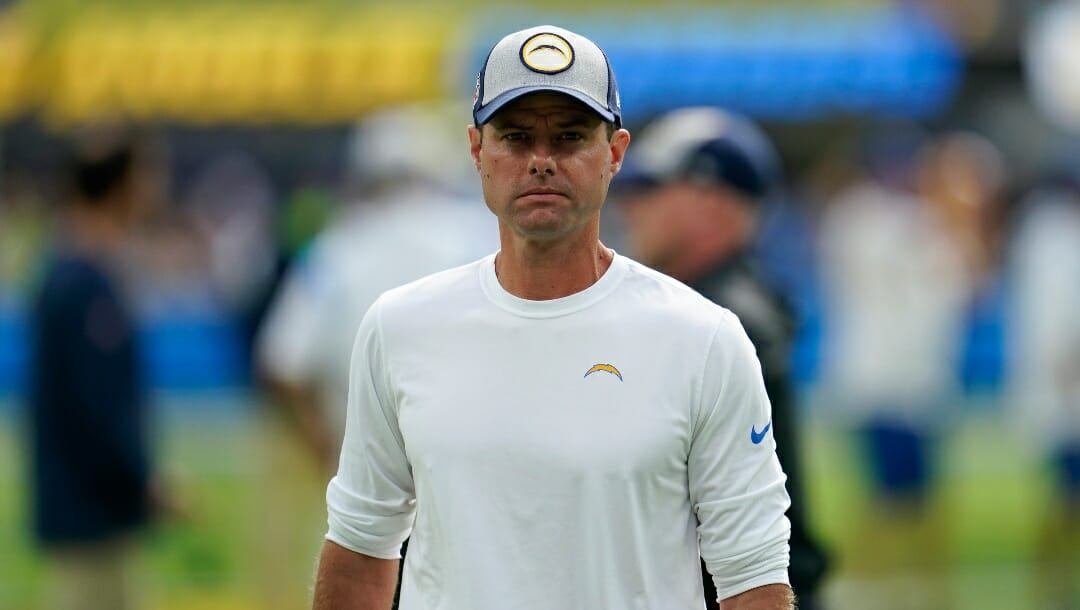 Through Week 12 of the NFL season, the Chargers are 6-5. That’s well below their expectations entering the season, and head coach Brandon Staley might be forced to take the blame.

As of Nov. 29, the Chargers’ NFL odds to win the AFC West are at +2500, and their odds to make the playoffs are -150. If they’re eliminated from the postseason hunt, Staley might not even keep his job by the end of this season.

If he is fired, who are potential fits to replace Staley in 2023?

Bieniemy has been in the mix with plenty of teams that have needed a head coach in the last few years.

The Chiefs are explosive on offense thanks to players like quarterback Patrick Mahomes, tight end Travis Kelce and their elite offensive line. Once again, they are in the Super Bowl hunt.

In 2022, Mahomes and Kelce lead the league in DYAR at their respective positions via Football Outsiders. The Chiefs are also first in total offensive DVOA.

Bieniemy was crucial for this offense’s development. The Chargers know first-hand how great the Chiefs have been and thus should consider Bieniemy to be their head coach.

Patrick Mahomes is on pace for 5,540 passing yards this season…

That would be a new NFL record 🤯 pic.twitter.com/yDvmYgCW2V

The Eagles have been one of the biggest surprises of the 2022 season. That’s in large part because of their defense.

The Eagles are sixth in the league in total defensive DVOA and second in pass defense DVOA. They also allow the second-fewest yards per game (304.4).

Gannon has been a potential head coaching candidate since last year and was a sought-after defensive assistant before joining the Eagles in 2021.

If Staley is fired, I’d imagine the Chargers would go after a coach with an offensive background. But in light of the Eagles’ recent successes, 39-year-old Gannon is a name to watch.

Ryans is a promising young coach at 38 years old. And the 49ers’ defense is skilled and disciplined, thanks in large part to him.

Ryans has been with the 49ers his entire coaching career. He worked with inside linebackers from 2018-20 and has been the team’s DC since 2021.

The 49ers are fifth in the league in total defensive DVOA and allow the fewest yards per game at 281.7. This team is stout, especially up front, and is clearly well-coached.

The Chargers should strongly consider Ryans, who also would likely build strong bonds with the players as a former NFL star himself.

Kafka is another candidate who’s extremely familiar with the AFC West.

Kafka is a former NFL quarterback who’s climbed up the coaching ranks recently. The-35 year-old has been working at the pro level since 2017 when he was an offensive quality control assistant with the Chiefs.

Kafka became Kansas City’s quarterbacks coach in 2018. That year, Patrick Mahomes took over as the team’s full-time starter and began his meteoric rise with an MVP season.

Kafka remained with the Chiefs until this season when he became the Giants’ offensive coordinator. The career resurgences of running back Saquon Barkley and quarterback Daniel Jones give Kafka a strong case to become a head coach.

SAQUON BARKLEY. PUT THE TEAM ON YOUR BACK.

The Cowboys’ defense has been so stout this season it’s difficult to overlook Quinn as a candidate for this job.

The Cowboys are first in total defensive DVOA and are first against the pass while being 10th against the run. They allow the seventh-fewest total yards (309.6 per game) while allowing the fewest passing yards (177.7 per game) in the league.

OMG MICAH PARSONS REALLY RETURNED THIS FOR A TD 😅😱