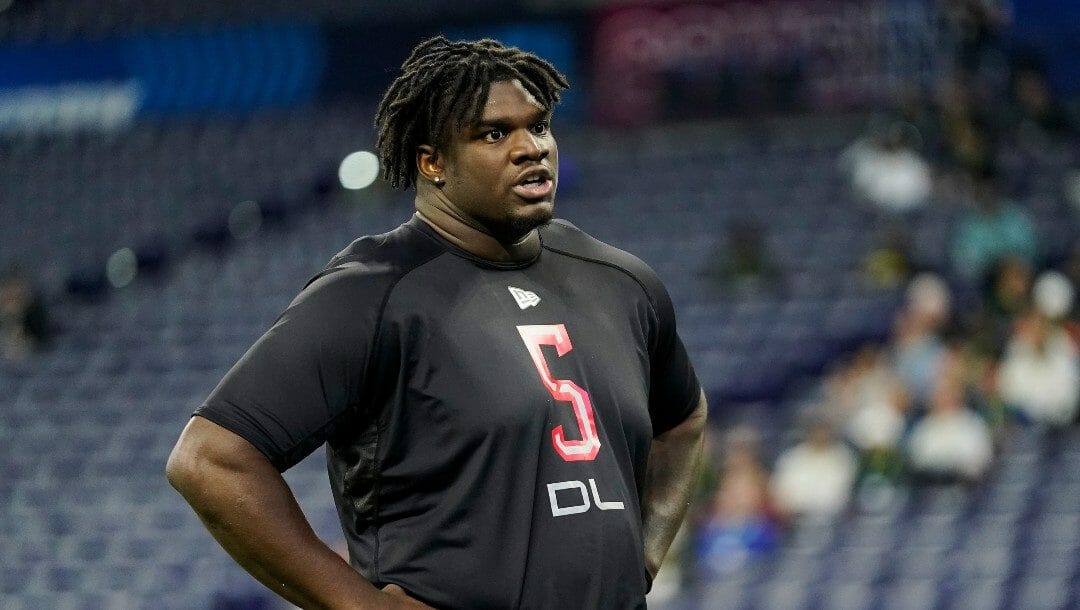 In a battle of top-five teams, Jordan Davis left his mark.

The Georgia defensive tackle, who’s considered an NFL Draft first-round talent, lined up over Clemson’s center. The Bulldogs led 10-3, but the Tigers had the ball at midfield with just over six minutes remaining.

When Clemson quarterback DJ Uiagalelei caught the shotgun snap, Davis burst out of his stance. He pushed off a blocker with either hand as if neither were there.

Uiagalelei moved forward in hopes of avoiding the pressure, but Davis chased him down out of the pocket.

Davis’ athleticism for his position and build is rare. He could be disruptive in the professional ranks for years to come.

Davis is tied for the ninth-best NFL Draft odds to be selected first overall at +10000. Michigan defensive end Aidan Hutchinson has the leading NFL Draft betting odds to be picked No. 1 at -350 as of March 21.

Jordan Davis is one of the five most valuable non-QB players in this entire draft. Feels insane that I need to justify thinking he should be a top 15 pick. 😅

The Jacksonville Jaguars have the first pick. They could use help at essentially every position except quarterback after selecting Trevor Lawrence in last year’s draft.

The Vikings, who have the 12th overall selection, were dead last in defensive adjusted line yards in 2021, per Football Outsiders. They were also 25th in rush DVOA while being 13th in pass DVOA. Pro Football Focus ranked their run defense 20th in the league.

I had to double check, but yes, this is 341 pound Jordan Davis bending and weaving at #Georgia’s Pro Day.

The Vikings plan to use multiple formations, and Davis would be a good foundational component for whatever scheme is implemented.

Davis was a two-time All-American in his career.

He won the Chuck Bednarik Award, which goes to the best defensive player in the nation, and the Outland Trophy, which is for the country’s standout interior lineman.

Davis, who helped Georgia win a national championship this past season, was also a finalist for the Bronko Nagurski Trophy and Lott IMPACT Trophy, which go to the country’s top defender overall.

Davis was a Freshman All-American in 2018 after totaling 25 tackles in 11 games with four starts. The following year, he made 18 tackles, 4.5 for loss, while starting eight of 14 games.

At 6-foot-6, 341 pounds with 34-inch arms, Davis is colossal. Yet he’s also powerful, explosive, and fast enough to track down skill position players in the open field.

With a 4.78-second 40-yard dash, Davis was the second-fastest defensive tackle at the NFL Combine. His broad jump of 10 feet, 3 inches was first at his position while his 32-inch vertical was second.

He showed that athleticism against No. 8-ranked Arkansas this past year.

Davis bounced off of one blocker, then while being pushed by another, still flowed to the perimeter. He eventually chased down running back Trelon Smith for a tackle.

Jordan Davis bench pressed the back block. Ojulari smashing the pulling LG. Nakobe Dean taking on the TE insert block with his face. Wyatt knocked off the ball but gets up and helps out pic.twitter.com/Qb52NZhUmI

Davis wasn’t necessarily relied upon to provide pressure on passing downs, so he could expand his repertoire in that area. He certainly was a standout run defender, though.

Davis is smart and often knows exactly where to line up and where to be after the snap. He demands double teams but clogs up multiple running lanes anyway. All of this can be highly useful for coaches scheming up defensive game plans.

In a contest with Missouri, Davis engaged an offensive lineman, but he didn’t go anywhere. He waited, just a moment, until running back Tyler Badie chose a direction to run. When he did, Davis wrapped him up and threw him to the ground.

This may be a common occurrence once Davis is in the NFL.