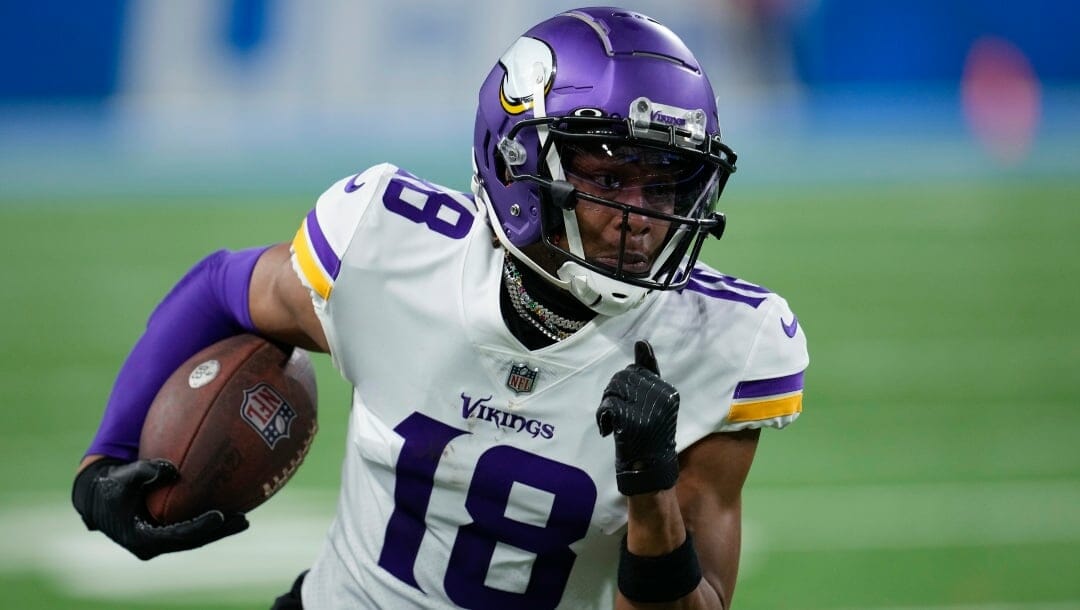 Justin Jefferson was among the top NFL odds leaders to win MVP at the end of the the 2022 regular season. That says everything about how stellar he was.

Jefferson, a third-year wide receiver out of LSU, nearly broke the NFL single-season receiving yards record at just 23 years old. And with his rookie contract to expire soon, he will be looking at a massive pay increase within a few years.

How much might Jefferson earn with his second contract?

Jefferson was selected 22nd overall by the Vikings in the 2020 NFL Draft.

His contract has a $7.1 million signing bonus, and the $13.1 million is all guaranteed.

The Vikings have the choice to exercise a fifth-year option on Justin Jefferson’s contract, which would take place in 2024, a year beforehand. The deadline for rookie contract fifth-year options has been in early May in the past.

For example, the deadline for fifth-year options on 2019 draft class rookie deals was May 2, 2022.

The money paid out for that option depends on a tier system. Because Jefferson has been selected for multiple Pro Bowls, the value of his option is moved to the highest tier.

That becomes the equivalent of a franchise tag. That number would factor in the average of the top five salaries of a respective position.

According to Over the Cap, the projected franchise tag value for wide receivers in 2023 is $19.9 million. But Jefferson and the Vikings would logically seek a more long-term solution.

Justin Jefferson could be looking at a contract worth at least $30 million per year and $150 million in total cash.

Jefferson almost broke NFL records in his third year in the league at just 23 years old. There’s little reason to believe he won’t be the best wide receiver in the NFL and the face of the Vikings for the next decade. He deserves to be paid accordingly.

In the 2022 offseason, Davante Adams of the Raiders and Tyreek Hill of the Dolphins signed massive contracts after being traded to their respective teams. Their deals are good indicators of where Jefferson’s may end up.

Amari Cooper and AJ Brown are other wide receivers who have deals worth at least $100 million in total value.

Jefferson’s contract probably deserves to be in the same realm as Adams’ and Hill’s. It might even be more with the NFL salary cap continuing to swell.

Considering his skill level and youth, Jefferson is worth a five-year, $150 million deal.

How Close Was Justin Jefferson To Breaking the NFL Receiving Record?

Jefferson led the NFL with 1,809 yards and 128 receptions in the 2022 regular season. He also had eight touchdowns.

Some more advanced metrics indicate how valuable Jefferson was. He was first in the league among wide receivers in DYAR and fourth in DVOA, per Football Outsiders.

Jefferson has earned a Pro Bowl nod in all three of his years in the NFL and an All-Pro selection in 2022.