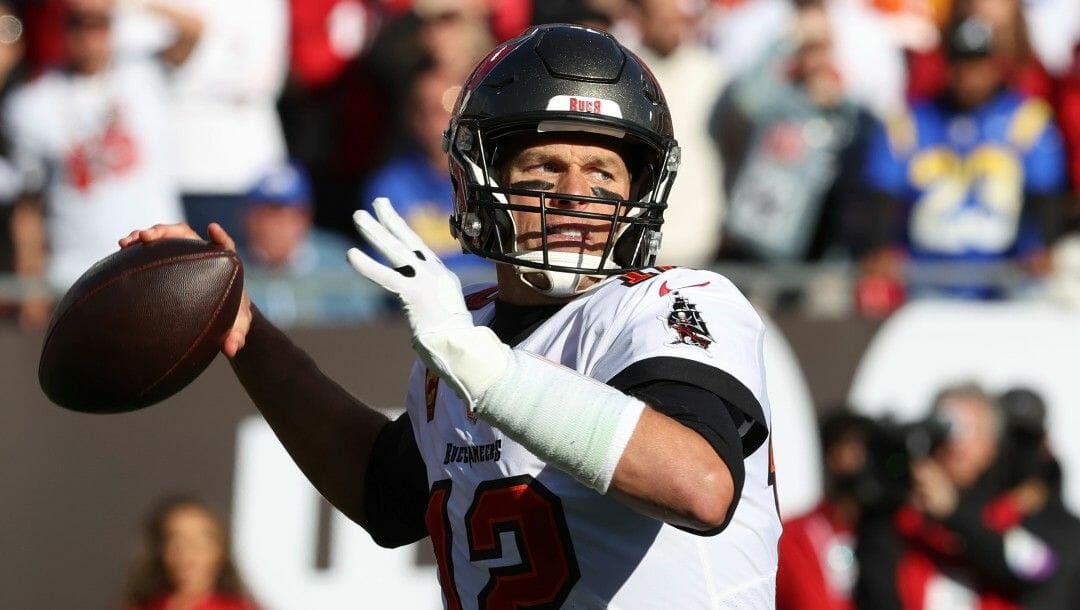 One of the best ways to take part in NFL betting over the course of the year is wagering on win totals before the season begins.

Here’s an updated list of where all 32 teams are compared to their win totals.

The Cardinals fell to 4-12 with a Week 17 loss to the Falcons. They are last in the division and eliminated from playoff contention.

The Falcons remain in last place in the weak NFC South despite a Week 17 win over the Cardinals. They are officially out of the playoff picture and will meet the Buccaneers for the regular-season finale.

The Ravens failed to lock down the NFC North title due to a late-game collapse against the Steelers. They enter the regular season’s final week with a record of 10-6.

The Bills’ Monday night matchup with the Bengals was postponed after safety Damar Hamlin suffered cardiac arrest during the game. They are scheduled to play the Patriots in Week 18.

The Panthers blew a 14-0 lead and their shot at the NFC South title during Week 17’s loss to the Buccaneers.

The Bears fell to the Lions in Week 17. With a record of 3-13, they are officially eliminated from playoff contention.

The Bengals’ Monday night matchup with the Bills was postponed after Bills safety Damar Hamlin suffered cardiac arrest during the game.

The Browns are officially out of playoff contention, so their Week 17 victory over the Commanders is essentially meaningless. They enter the final week of the regular season with a record of 7-9.

The Cowboys earned their 12th win of the season against the Titans. Next, Dallas has a shot at securing the NFC East division title if they win and the Eagles lose. They could clinch the top seed, home advantage, and a first-round bye if a 49ers loss is added to the equation.

The Broncos dropped another game in Week 17. It has been a tough season in Denver.

The Lions’ postseason hopes are alive for another week. In Week 18, they’ll battle for the final NFC wild-card spot against the Packers at Lambeau Field.

The Packers kept their playoff hopes alive with a victory over the Vikings. Next, they’ll try to continue the winning streak against the Lions.

The Texans enter their final week of play with a 2-13 record. At this point, the best-case scenario is the first pick in the draft.

The Colts lost to the Giants in Week 17. With a record of 4-11-1, they are eliminated from the postseason. To finish the season, they’ll face the Texans at home.

The Jaguars defeated the Texans on the road in Week 17. With a record of 8-8, they’ve clawed their way to the top spot in the AFC South. They’ll face the divisional rival Titans for their final match of the season.

The Chiefs are ready for the postseason. They will likely enter the playoffs as the AFC’s first or second seed, depending on their Week 18 performance.

The Raiders fell to 6-10 with a loss to the 49ers. They are officially eliminated from the postseason.

The Chargers improved to 10-6 with a victory over the Rams. Since the Ravens lost to the Steelers, they are on track for the AFC’s No. 5 seed if they beat the Broncos in Week 18.

The Rams lost to the Chargers in Week 17. All sights are set on next season, as they are already eliminated from playoff contention.

The Dolphins dropped to 8-8 on the season with a 23-21 loss to the Patriots. They’ve lost five straight but remain in the hunt for a wild-card spot.

The Vikings suffered an ugly loss to the Packers in Week 17. With a record of 12-4, they dropped from the NFC’s second seed to the third seed.

The Patriots defeated the Dolphins in Week 17. Their playoff hopes are hanging on by a thread; making the postseason will require a win over the Bills.

The Saints earned an unexpected Week 17 win over the Eagles. Despite the victory, they were eliminated from the postseason due to the Buccaneers’ and Packers’ wins.

The Giants clinched their spot in the playoffs with a win over the Colts. They’ll face the Eagles on the road to close out the season.

For the 12th year in a row, the Jets are out of the playoff picture. They were eliminated with Week 17’s loss to the Seahawks.

For the second week in a row, the Eagles failed to clinch the division and the NFC’s top playoff seed. They’ll have one more chance to clinch with a win or tie against the Giants next week.

The Steelers are still standing. They defeated the Ravens with an outstanding fourth-quarter performance from rookie quarterback Kenny Pickett. To make the playoffs, they need to win next week in Cleveland and need the Dolphins and Patriots to lose.

San Francisco has now won nine straight games with a win over the Raiders. They secured the NFC’s second seed and could have a chance at the top seed if the Eagles lose to the Giants in Week 18.

Seattle’s NFC playoff hopes stay alive for another week with a win over the Jets. To make the postseason, they must beat the Rams in Week 18 and need the Lions to win or tie.

Tom Brady is headed to the postseason for the 14th straight time. With their Week 17 win over the Panthers, the Bucs clinched the division and earned home-field advantage in the opening round of the postseason.

The Titans lost to the Cowboys in Week 17. Next, they’ll travel to Jacksonville to face the Jaguars with the AFC South title on the line.

Washington fell to 7-8-1 with a loss to the Browns. They are officially eliminated from playoff contention.