10 Highest-Scoring Browns Games: Most Points Ever 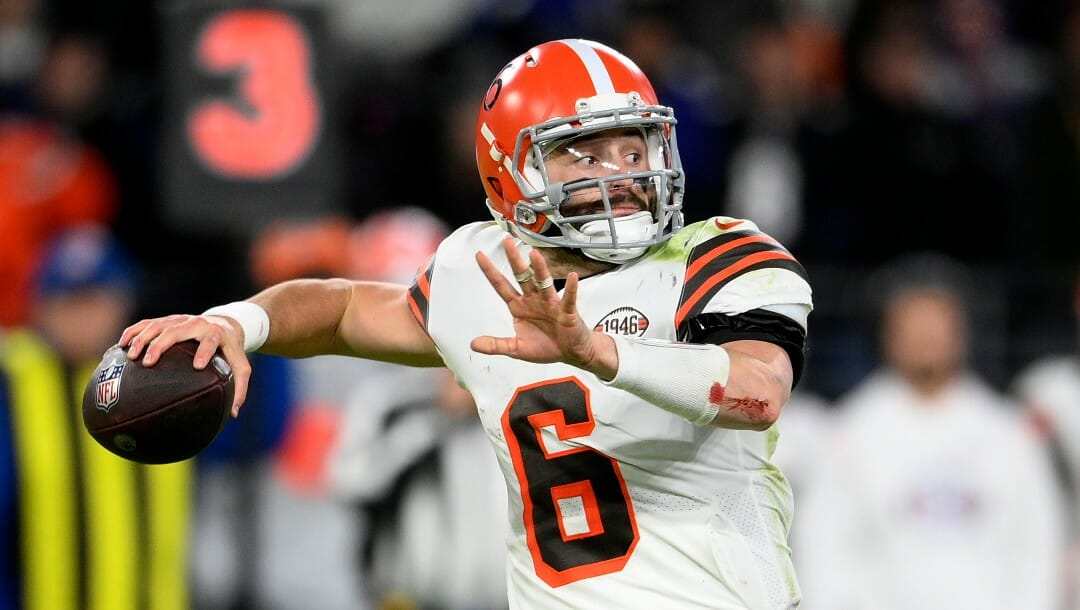 The Cleveland Browns, who have +3000 NFL odds to win the Super Bowl, have been around since 1944, so they’ve played in their fair share of high-scoring games throughout their NFL existence.

With that, let’s rank the top 10 highest-scoring Cleveland Browns games:

The highest scoring game in Cleveland Browns’ history saw the club score eight touchdowns, which included three through the air from George Ratterman. What’s crazy about the stat line for the Browns’ starting quarterback was that he threw for just 10 completions on 11 passes in the trouncing of the Washington Redskins. The rushing attack was ultimately the key to victory, which saw the team run for 226 yards and three touchdowns.

Cleveland tallied 62-points in this contest for the first time in franchise history when the team beat up on the New York Giants by 48-points in 1953. Ratterman once again led the charge at quarterback with three touchdowns and 237 passing yards, while the defense picked off Charlie Conerly three times. It was the Pete Brewster show on this date, where the wide receiver caught seven passes for 182 yards and three scores.

Frank Ryan and the Cleveland Browns had an incredibly efficient performance in their throttling of the New York Giants for the second time on this list. Ryan threw just 12 times in the win for 202 yards and five touchdowns. In addition to the efficient passing attack, legendary Browns running back Jim Brown rushed for 99 yards, while five different wideouts caught six touchdown passes from Browns quarterbacks.

The Browns’ first divisional tilt on this list was their highest combined score in a matchup, where they outlasted the Cincinnati Bengals 51-45. Carson Palmer threw for a game-high six touchdowns but was also picked off twice, while Derek Anderson was better for the Browns with a quarterback rating of 121 and five touchdowns.

The Cleveland Browns laid an absolute beatdown on one of their biggest rivals in the Pittsburgh Steelers back in 1989, which saw the defense score 21 points, including two scoop and scores and a 14-yard pick-six from David Grayson. On offense, Browns quarterback Bernie Kosar didn’t even record a touchdown in the victory, while the team rushed 44 times for 152 yards and three touchdowns.

Cleveland and the Dallas Cowboys combined for 87 points back in 2020, the most recent game on this list of high-scoring affairs. In an almost monumental collapse, the Browns were outscored 24-8 in the fourth quarter but still held on for an 11-point victory. Baker Mayfield threw for a pair of touchdowns, while wide receiver Jarvis Landry also tossed a touchdown pass in the win.

The New York Giants held a 37-28 lead after three quarters against the Browns in 1966 before Cleveland outscored them 21-3 in the final frame and picked up the victory. Cleveland quarterback Frank Ryan threw for 326 yards and three touchdowns but was also picked off three times. Leroy Kelly rushed for 126 yards on 13 attempts while compiling three scores on the ground.

Leroy Kelly put on another star-studded performance against the Atlanta Falcons in 1966, which saw him scamper to the endzone on a 70-yard touchdown run. The Browns quarterbacks combined for six passing touchdowns in the victory, led by Frank Ryan, who struck four times through the air in the win.

Efficiency wasn’t exactly the name of the game back in 1952 for the Browns, but they still managed to blow out the Philadelphia Eagles by 42 points in this October matchup. Otto Graham was picked off twice for the Browns, but he still managed to throw four touchdown passes and completed 18 of 30 passes. Five different wide receivers caught touchdown passes, with Dub Jones tallying six receptions for 121 yards and a touchdown.

The final Browns beatdown on their top ten list of highest scoring games saw them outlast the Chicago Cardinals in 1951. Otto Graham had another game where he’d probably have liked to have some throws back, getting picked off three times but still managing to tally four touchdowns. Mac Speedie was targeted to score in this contest and did so three times through the air in the victory to lead the Browns.