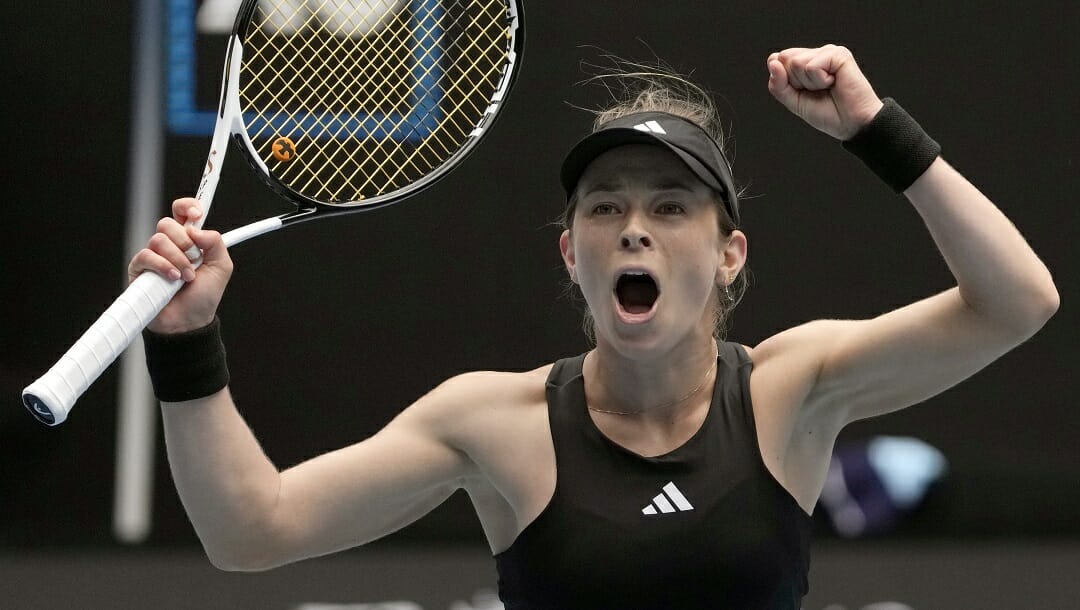 The women’s draw at the Australian Open is officially open for business.

The tennis betting community got its first glimpse at a major upset on Wednesday night – US time – as American qualifier Katie Volynets eliminated No. 9 seed Veronika Kudermetova, 6-4, 2-6, 6-2.

Katie Volynets (+700) scored one of the biggest early upsets of the 2023 tournament by applying pressure early and forcing Kudermetova to play from behind.

After scoring a break in Game 7 of the first set, Volynets consolidated the break and seized the opening frame. Kudermetova pushed the match to a third set, where she fell behind 0-3. It was downhill from there.

Volynets made it into the main draw of the Australian Open for the first time last year, but she’d never won a main draw match at a grand slam tournament until last spring at Roland Garros.

This year, Volynets (WTA Rk 113) may be taking the next career step forward with her first memorable major showing.

As a qualifier that’s now advanced to the third round of the Australian Open, Volynets is likely to be a sizable underdog in any remaining match that she might play. If you think there’s even a small chance that she’s got another win in her, it can be highly lucrative to roll some of your money over on her.

Volynets will play the winner of Thursday’s match between No. 23 seed Shuai Zhang and Petra Martic (more on them in a second).

If it’s Martic, expect a steep number. The Australian Open might be her worst grand slam event, historically speaking, but she does own a head-to-head win over Volynets from 2021 Indian Wells.

The winner of that match is likely to play No. 30 seed Karolina Pliskova in Round 4, who is currently 50-to-1 to win the tournament.

Volynets saw a big odds shift after her Kudermetova upset. She’s now listed at 100-to-1 at the BetMGM online sportsbook. She opened the tournament at 500-to-1.

Here’s one of my favorite bets from the upcoming action. As I mentioned, Katie Volynets will play the winner of Shuai Zhang vs. Petra Martic in the third round, and I’m pretty confident that the winner of this match will be Martic.

For one thing, Martic is the favorite in this match, despite showing no seed and a lower WTA ranking relative to Zhang.

More importantly, Zhang is in truly awful form coming into this match. Zhang, who turns 35 this weekend, lost matches to Liudmila Samsonova and Ana Bogdan in Adelaide earlier this month.

Zhang advanced in the Aussie main draw only after nabbing a three-set win over Patricia Maria Tig in the first round. It shouldn’t take Zhang three sets to beat a player ranked outside the top 500.

One thing I try to target when handicapping tennis odds is a match with an unusual favorite. This one isn’t truly shocking, but it’s enough of an eyebrow raise that I’m interested in a small position on Martic.

Want more tennis betting analysis? Don’t forget to subscribe to The Lion’s Edge for intelligent, weekly insights into trends and betting tips across the online sports betting world. It’s available on iTunes, Spotify, or wherever you listen to podcasts.

BetMGM is the premier online sportsbook for Australian Open odds each year!

Whether you’re a first-time bettor checking out tournament winner odds, a casual fan browsing live betting opportunities, or a seasoned pro building parlays, there are options for everyone.

Visit the sportsbook today to start betting on the Aussie Open!