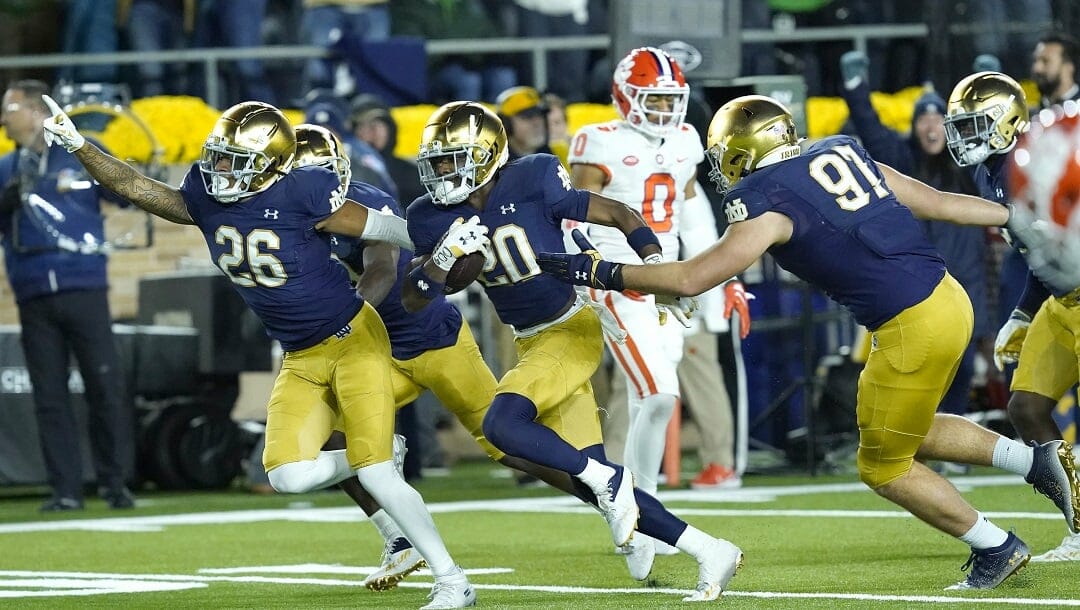 Week 11 of the college football calendar has arrived, and with it comes a new table of NCAAF odds.

I think Brian Kelly is going to be awesome in Baton Rouge, but do we really think LSU is a top-10 team? Or did they simply play their way to a one-point win over a flawed Alabama team with a high-leverage play at the end?

Every week, I talk about two key principles. College football is an emotional sport with dramatic week-to-week swings that’s played by 19 and 20-year-old kids. And, more broadly, in college football betting, it’s important to buy low and sell high.

That all leads us to Arkansas – a flawed team for sure, but one that’s a noticeably light home dog in this spot against a top-ranked team coming off a loss to Liberty.

Everything about the fundamentals of this spot screams Arkansas as a sharp spot. The ticket/handle splits confirm it: About 70% of market-wide tickets are on LSU, but nearly three-quarters of the overall betting handle is behind Arkansas.

"Do I think LSU is the number 7 team in college football? Of course I don't"

After a huge win against Alabama, @chaseakiddy sees the LSU coming back down to earth this weekend against the Razorbacks

Yes, we’re still selling high on teams that outperformed their median, and that means fading Notre Dame a week after its landscape-altering win over previously undefeated Clemson.

One key football betting stat in this spot: Notre Dame is 1-4 ATS when they have to lay points this season. The Irish have not been a good bet when they need to win by margin.

That’s not to say I have zero skepticism about Notre Dame in this spot. After being wildly inconsistent throughout the first half of the season, the Irish have rattled off three straight double-digit wins against UNLV, Syracuse and the aforementioned Tigers.

Many of Notre Dame’s favorite spots came early in the year – and early in Marcus Freeman’s first year as a head coach – so there’s a chance Notre Dame ATS stats should be flushed down the toilet. It could be a fundamentally different handicap now than seven weeks ago.

However, I still feel this is too many points to give a Navy squad that’s been very competitive throughout the season despite its record. The Midshipmen are 5-2 ATS as a dog and 4-0 ATS outside of Annapolis; this game will be played at M&T Bank Stadium in Baltimore.

There aren’t 10 people on Earth who are more plugged into the James Madison football program than me. I started covering the team in 2011 as a student journalist. I was part of the local print coverage from 2016-18, then transitioned to national FCS coverage with HERO Sports.

I know the beat well, and I have a very strong week-to-week record in handicapping JMU football.

My Dukes jumped out to a great start this year, but injuries to key offensive pieces – quarterback Todd Centeio, multiple starting offensive linemen – have completely eroded the competitiveness of the team. Centeio completed four passes in last week’s loss at Louisville.

National analysts and college football odds markets have not caught up with this reality.

JMU football scoring differential in the second half:

If Centeio was healthy or if this game was played two months ago JMU would win by 40.

Instead, this will be a horribly ugly game with virtually no offense. The under is an automatic play here, and on principle, you cannot lay points with JMU right now. This should be two separate bets, plus a same game parlay.

It feels like I talk about unranked favorites playing against ranked underdogs on a weekly basis.

Public bettors love to back teams with a small number next to their name, and online sportsbooks generally price games according to public betting appetite.

Thus, any time a ranked team is playing as an underdog, that’s a spot advantage bettors approach skeptically.

The Big 12 actually offers us multiple betting opportunities on this specific trend this week, with Kansas State catching 2.5 (originally 3.5) points in Waco and TCU a full +7 underdog at Texas.

I’m choosing to roll with Baylor rather than Texas purely because of the number. TCU has continued to defy expectations by running the table in the Big 12, and a close loss that covers the number wouldn’t surprise me. Texas is likely better as a moneyline parlay leg.

Compare that to Baylor, which is still a trend play, but at a much more friendly number that’s moved down south of the key -3 position.

Kansas has been a popular fade target for me throughout the latter half of the season because public overvaluation has kept its opponents’ betting positions lucrative.

That remains true this week after Kansas’ big 37-16 win over Oklahoma State last week. The Jayhawks clinched bowl eligibility and partied like it was 2008.

But Kansas remains overvalued, as nearly two-thirds of all market-wide tickets in this week’s game are on Kansas plus the points. The Jayhawks’ big win – while a great story all college football fans should celebrate – was much more about Oklahoma State’s health on offense than anything else.

I quite like this Texas Tech side. On the football field, I feel they are the better team; more importantly, though, is what the number tells us about the betting market. With a big majority of tickets already on Kansas, it wouldn’t take many sharp signals to move this number to Texas Tech -3.

Instead, it’s remaining at Tech -3.5, which suggests the sportsbook and professional bettors favor the home favorite.

I’m returning to a large moneyline parlay centered around favorites this week. You can get this six-teamer for -104.

Want to check out the full Week 11 podcast on how to bet college football? Don’t forget to subscribe to The Lion’s Edge for intelligent, weekly insights into trends and betting tips across the online sports betting world.