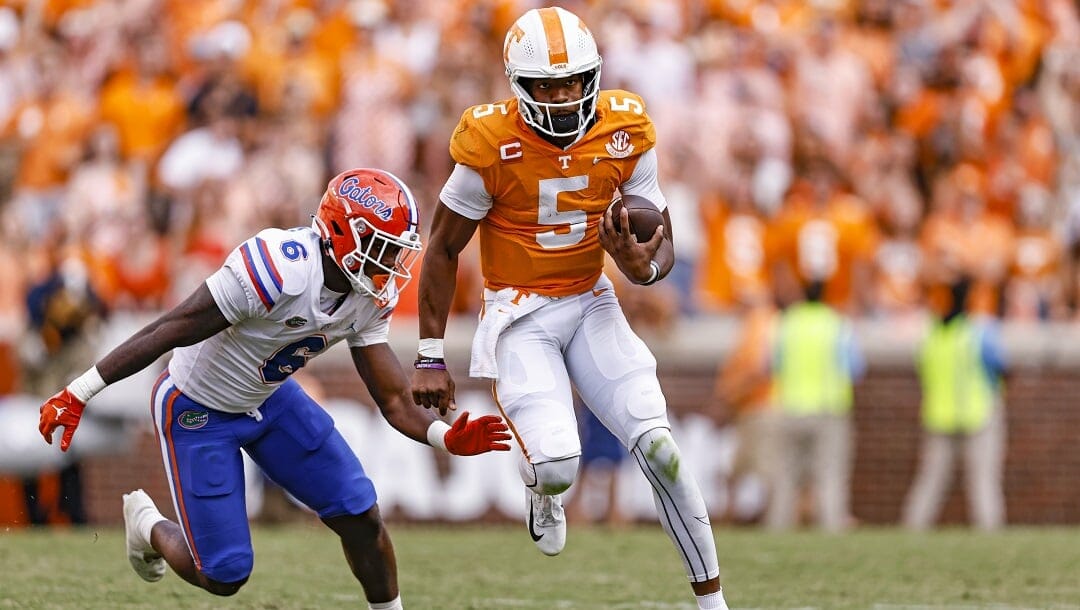 Who Is the Current Favorite to Win the Heisman in 2022?

C.J. Stroud, the Ohio State quarterback, is the early betting favorite (+150) to win the Heisman Trophy.

Stroud feels like one of the better options to win the award in a year that should be dominated by No. 1 Alabama and No. 2 Ohio State. Both quarterbacks figure to be in the mix well into January and should be taken very seriously as Heisman candidates.

Since it’s unlikely that the voting pool will give Young back-to-back awards, Stroud is a particularly strong candidate – even if he’s only available at a +150 price.

However, betting at the top of the market can lead to lousy ROI – especially in the Heisman market.

You can see how that went. Two of those guys aren’t even at the same school anymore.

However, Stroud reasserted his place at the top of the market with a strong performance against Arkansas State and remains there now.

Bryce Young, the Alabama quarterback, is currently +400 to win the 2022 Heisman Trophy.

The betting public knows Bryce is capable of winning the Heisman Trophy for a very simple reason: He won it last year.

The tight win that Alabama earned at Texas didn’t improve Young’s Heisman odds, despite the fact that Alabama likely would have lost if it wasn’t for his late heroics.

Caleb Williams, the USC quarterback, is currently +600 to win the 2022 Heisman Trophy.

Williams and the Trojans’ offense rolled early, but USC hit its first major snag of the season when it needed a late comeback to edge out Oregon State in Corvallis, 17-14. He finished 16-for-36 with 180 yards passing and one touchdown.

The sluggish game dropped Williams down to the table’s third position at +600 odds.

Hendon Hooker, the Tennessee, is currently +1600 to win the 2022 Heisman Trophy.

With College GameDay on site for Tennessee’s marquee SEC divisional contest with Florida, Hooker passed for 349 yards (two TDs) and rushed for 112 yards (one TD).

As a result, Hooker is the big mover in the Week 4 Heisman Trophy odds market, shooting up to the No. 4 spot in the table.

Stetson Bennett, the Georgia quarterback, is currently +2200 to win the 2022 Heisman trophy.

Bennett was arguably the biggest winner of Week 1. The 2021 national champion confidently strode into a new season with an utter decimation of the Oregon defense, and the Ducks had no chance to keep up. Final stat line: 25-for-31, 368 yards, three total touchdowns.

Bennett opened the market at 100-to-1 and was bet down to 50-to-1 before the season kicked off. After a huge win against Oregon (and a sleepy shutout win over Samford), his odds have shot all the way into the true contender zone.

Jalon Daniels, the Kansas quarterback, is currently +3000 to win the 2022 Heisman Trophy.

As the quarterback at Kansas, Daniels was such a preseason longshot that he wasn’t even anywhere on the odds board.

However, with Kansas’ improbable hot start to the 2022 college football season, Daniels is shooting up Heisman betting boards a third of the way through the season.

Kansas is unlikely to stay undefeated for much longer, but Daniels is a legitimate playmaker that should be taken seriously in this market.

Daniels has also become the largest betting liability at the BetMGM online sportsbook, with more than a quarter of the overall market handle backing him.

JJ McCarthy, the new Michigan quarterback, is currently +8000 to win the 2022 Heisman Trophy.

McCarthy wasn’t even necessarily expected to see playing time for Michigan this year. After all, Cade McNamara led the Wolverines to the College Football Playoff last season and is still with the team.

However, McCarthy appears to have a firm grip on the job (at least for now) with stellar play over the first month of the season. It doesn’t hurt that McNamara appears to have gotten hurt, either.

After Michigan struggled to put away Maryland, McCarthy’s odds rocketed back down the board, which is probably an overreaction to one result. McCarthy could be an interesting buy-low candidate.

Defensive Player with Highest Odds to Win Heisman in 2022

Will Anderson, the Alabama linebacker, has the best odds of any defensive player to win the 2022 Heisman Trophy at +4000.

Anderson has become a trendy pick to win the Heisman after his elite play in 2021, but the history of defensive Heisman winners is very short.

Charles Woodson is the last (and so far only) player to win the Heisman while playing primarily on the defensive side of the ball. The Michigan cornerback won the award for his stellar play during the 1997 season.

While a handful of defensive players have finished as Heisman finalists – including Michigan defensive end Aidan Hutchinson during last year’s voting – Woodson remains the only defensive player to win the award.

Keep that in mind if you’re considering NCAAF odds for Alabama linebacker Will Anderson at +2500.

Alabama running back Jahmyr Gibbs (+6600) offers the best blend of value and realism.

As I said above, I expect the season to boil down to Alabama vs. Ohio State in January. That often means the eventual Heisman winner will be selected from one of those teams.

Using that logic, QB Stroud remains the most likely option. If you’re sticking to the Heisman favorites, I recommend a play on Stroud, despite the poor return.

However, Gibbs presents a much more valuable ticket, and as I explained on a recent episode of The Lion’s Edge, there are plenty of football factors to back up.

Last year, Young won the Heisman in part because the Alabama run game was a mess. Running backs were getting hurt all the time.

At one point last season, Alabama even moved linebacker Demouy Kennedy to the running backs room because it was one Trey Sanders injury away from running out of players.

As a result, Alabama turned to its stellar receivers and passing game more than ever, resulting in plenty of opportunities for Young to shine.

You know what happened next.

This year, we may see the opposite in Tuscaloosa. Alabama has bled NFL-caliber receivers into the pro game at a staggering rate over these last few years. As a result, they may be relatively young and inexperienced at receiver this year.

The running backs, on the other hand, should excel in 2022. Gibbs, who transferred in from Georgia Tech after 1,800 all-purpose yards last year, should be the best of the bunch.

Ask yourself the obvious question: If Gibbs can put up numbers like that at lowly Georgia Tech, what can he do behind Alabama’s offensive line?

I bought a Heisman ticket for Gibbs at 30-to-1 the week before the first games were played. There’s still time to back a great player on the best team at an even better price.