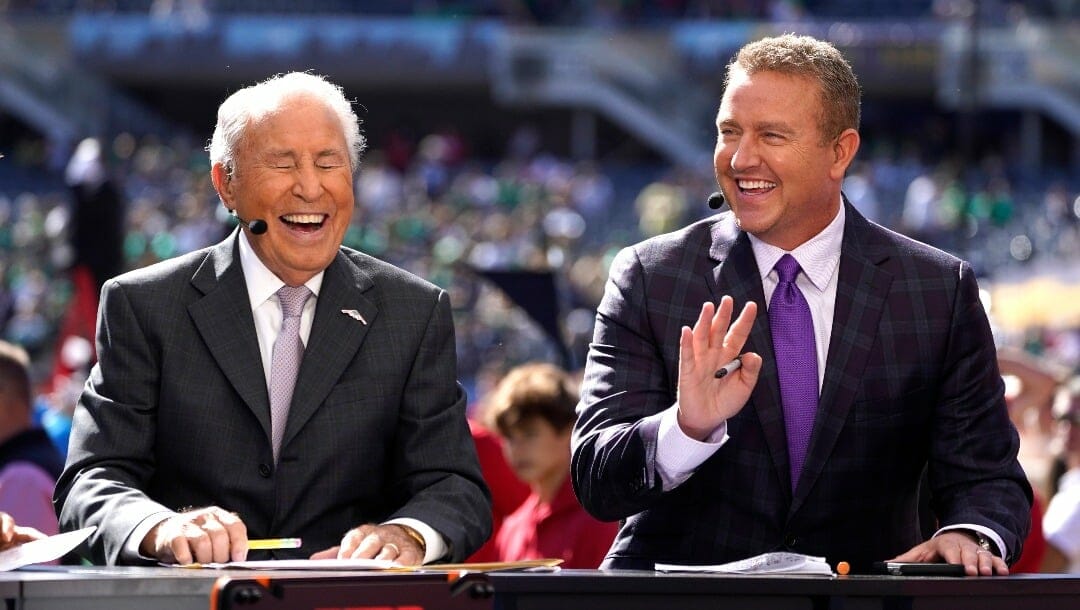 Over 35 years, ESPN College GameDay has grown from a little-known in-studio cable TV show into a multimedia behemoth that routinely attracts more than two million viewers each week.

Which college football games will Rece Davis, Kirk Herbstreit, Lee Corso, and the rest of the GameDay crew broadcast from this season? As you browse college football odds, here are GameDay locations and predictions for 2022:

College GameDay is returning to Pasadena for the second time in two years after a one-year hiatus in 2020.

The show first broadcasted from the Rose Bowl on Jan. 1, 1998, when Michigan played Washington State.

Instead of jumping across the country in one week as the show often does during the regular season, College GameDay is going from Pasadena to Inglewood, a drive of approximately 30 miles, for the national championship.

ESPN didn’t broadcast from the national championship in either of GameDay’s first two seasons with road visits (1993 and 1994) before beginning the annual tradition in 1995. They haven’t missed a title game since.

For the first time since 2019, College GameDay visited a Thursday game in Week 1.

ESPN passed on a neutral-site blockbuster, Oregon vs. Georgia in Atlanta, for an on-campus blockbuster, Notre Dame at Ohio State in Columbus.

Instead of a sixth trip to Atlanta since 2017, GameDay went to Columbus for the eighth time since 2014. And the Buckeyes made their 54th all-time appearance, the most among all schools.

It’s the first time since 2019 GameDay visited two games in the same week; the show went to Clemson (for Georgia Tech at Clemson) and Arlington (for Auburn vs. Oregon) in Week 1 three years ago.

Texas losing to UL Monroe in Week 1 was the only thing that could’ve prevented GameDay from visiting Austin for their Week 2 matchup against Alabama. It’s the first meeting between the two tams since the 2009 national championship – and the first regular-season meeting in 100 years.

And Texas delivered an unexpectedly sensational performance in nearly upsetting the Tide.

GameDay finally went to one of the most majestic sites in college football: Kidd Brewer Stadium.

Week 4 was ripe for a trip to Boone – for James Madison at App State – but ESPN opted to visit the Blue Ridge Mountains week earlier. That left several potential options:

Arkansas’ loss to Texas A&M potentially prevented GameDay from the Razorbacks hosting (vs. Alabama) in Week 5. That left Kentucky-Ole Miss, NC State-Clemson, and Iowa State-Kansas as the most likely picks.

And ESPN picked Clemson for the first time since 2020.

It appeared GameDay would be in Dallas for potentially the last Red River Rivalry game in the near future or in Tuscaloosa for Jimbo vs. Saban. But with early-season struggles for Oklahoma, Texas, and Texas A&M, Kansas got the call.

The Jayhawks were featured in the 2007 regular-season finale against Missouri, though that game was at Arrowhead Stadium. They are one of eight Power Five schools to never host the show. The remaining schools: Cal, Duke, Illinois, Maryland, Rutgers, Syracuse, and Virginia.

Texas’ blowout of Oklahoma and Oklahoma State’s early-season success has shifted the Week 8 GameDay prediction from Harrisonburg, Va. – for Marshall at James Madison – to Stillwater, Okla. But with Oklahoma State’s loss to TCU in Week 7, ESPN opted for a visit to Eugene for the first time in four years.

GameDay’s last visit to Oregon came in 2018 when the Ducks hosted Stanford, who erased a 17-point halftime deficit and shocked Oregon in overtime. It’s the only time Oregon hosted GameDay since 2014; the show was previously there eight times between 2007-14.

ESPN passed on Penn State (vs. Ohio State) for their first-ever trip to Jackson State.

This was originally a big “if” week:

If Miami (FL) is good, the Canes could host when Florida State is in town.

If LSU doesn’t suck entering their Week 10 game against Alabama, GameDay might be in Baton Rouge for a third Alabama-LSU game in seven years.

If Tennessee has a breakthrough season and Georgia hasn’t stumbled, GameDay might be in Athens for the fifth time in four years. And that’s exactly what happened.

ESPN passed on Ole Miss (vs. Alabama) and Tulane (vs. UCF) for their first visit to Austin since 2019.

Texas was once a regular GameDay stop, hosting six times from 1999-2009, before a nine-year drought as the program struggled for relevance. Now they’ve hosted twice in the last four seasons.

TCU made their second appearance of this season – both on the road – after zero appearances in the previous three seasons.

ESPN passed on USC-UCLA at the Rose Bowl for the Brawl of the Wild in Bozeman.

It was GameDay’s second FCS game in four weeks – Jackson State hosted in Week 9 – but the first-ever appearance for both Montana and Montana State. In fact, the show has never featured a school from the Big Sky Conference.

This was College GameDay’s third trip to Ohio State since 2021 and 22nd overall trip, by far the most among all schools. It was the first GameDay visit for a Buckeyes-Wolverines game since 2018.

After broadcasting from the SEC Championship each of the last three traditional college football seasons, GameDay passed on a fourth straight trip for their first visit to the Big 12 Championship since 2007.

It was TCU’s third appearance this season after only two appearances from 2015-21.

The Army-Navy Game returned Philly after a two-year hiatus. And College GameDay broadcasted from the game for the eighth straight year.

ESPN opted for Atlanta over Glendale for the College Football Playoff semifinals, broadcasting from the Georgia-Ohio State game instead of the Michigan-TCU game.

It was the show’s first trip to Atlanta since the 2021 season opener (Alcorn State vs. NC Central).

Online sports betting is a unique way to add more excitement to each college football season.

From Week 0 through the College Football Playoff, you can bet on spreads, over/under totals, moneylines, and more. And with live sports betting, there’s never a break in the action. You can bet on live odds during hundreds of games each year.