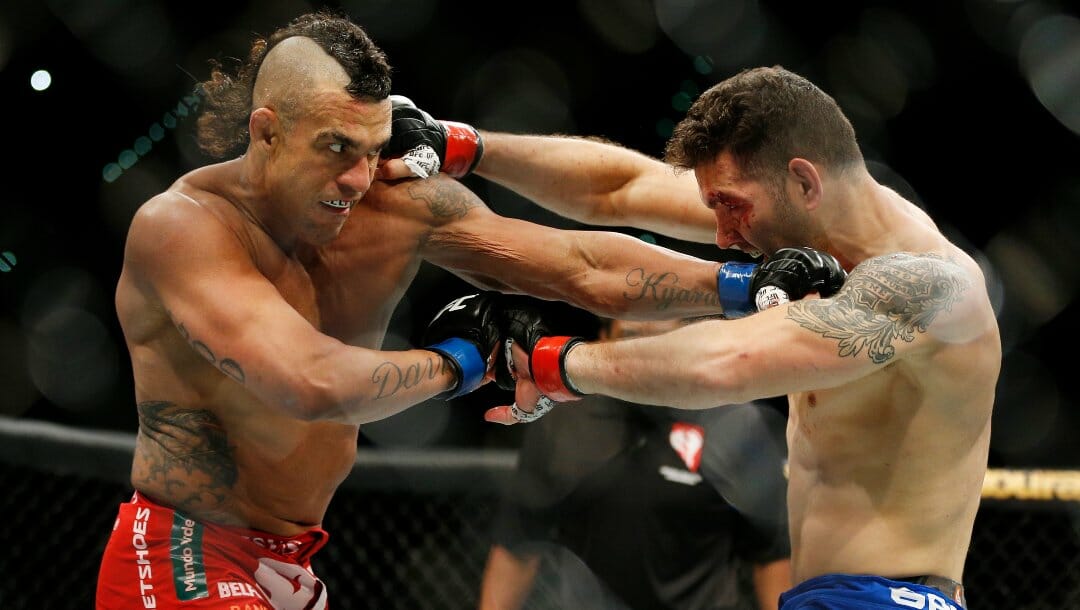 Because of the COVID-19 pandemic, fight cancellations and disruptions to the UFC odds became more common as various athletes contracted the virus. With fighters forced out of their scheduled match, there have been two outcomes: The fight is rescheduled on another date, or another competitor steps in on short notice to be a replacement.

This situation is not new in the UFC; in fact, previously booked matchups seemed to have bad luck because they were canceled at least twice. Various reasons play a huge role in these scrapped fights, but the primary reason is an injury suffered by a fighter.

Here is a list of three UFC fights canceled at least twice. This list includes bouts that went through and the ones we didn’t get to see.

Probably the most cursed UFC fight of all time. The highly-anticipated showdown between lightweight superstars Khabib Nurmagomedov and Tony Ferguson never came to fruition even after five attempts.

First, it was supposed to happen in December 2015, but the Russian begged off because of a knee injury.

Then it was rescheduled for April 2016. However, it was Ferguson who backed out due to a lung issue.

The third attempt in March 2017 was not a charm, as Khabib once again pulled off of the fight, this time due to an illness caused by the brutal weight cutting.

It was then scheduled for the fourth time for the main event of UFC 223, but yet again, ‘’El Cucuy’’ hurt his ankle in the buildup. And finally, with both being healthy and injury-free, a fifth attempt for the fight was scheduled as the headliner of UFC 249 in April 2020. The pandemic occurred, which is why Nurmagomedov couldn’t travel outside Russia due to travel restrictions.

Ultimately, the Ferguson-Nurmagomedov never materialized as the ‘’Eagle’’ retired from the sport after his last fight against Justin Gaethje in October 2020.

The matchup of Chris Weidman and Vitor Belfort needed three attempts before it finally pushed through.

After a short stint in the light heavyweight division to challenge Jon Jones for his title, Belfort returned to the middleweight division to have another championship run. The Brazilian was supposed to test the newly-minted champion, Chris Weidman, for his third title defense in May 2014, but Belfort pulled out of the match because of a failed drug test.

Then, the second try happened in December 2014, but Weidman backed out due to a hand injury.

Three months later, it was rebooked for UFC 184 in February 2015, but the titleholder was again forced out of the fight because of a sustained rib injury.

Finally, after a year and three bids, the high-profile welterweight championship clash eventually took place in the co-main event of UFC 187 in May 2015.

Ultimately, Weidman successfully defended his title against Belfort after a first-round ground-and-pound finish to collect his 13th successive victory and third championship defense.

The meeting between Khamzat Chimaev and Leon Edwards is the perfect example of a matchup that was canceled multiple times due to COVID-19.

After an impressive three stoppage wins in a row in three months, Khamzat Chimaev put the whole welterweight division on notice and started to call out names. One of the fighters who responded to him was Leon Edwards, who was ranked second at that time and on an eight consecutive winning streak.

The pair agreed to meet in December 2020, but Edwards tested positive for COVID-19, which is why the UFC rebooked in January 2021. However, this date was also scrapped as Chimaev contracted the virus.

Then for the third time in March 2021, the welterweight showdown never went through as the Swedish rising star was still suffering from the ‘’lingering effects of the COVID-19 virus.’’

In the end, new MMA odds were released as Edwards and Chimaev fought different fighters, with ‘’Rocky’’ defeating Nate Diaz via unanimous decision and ‘’Borz’’ submitting Li Jiangliang in the first round. It is still unknown if the pair will meet in the future.