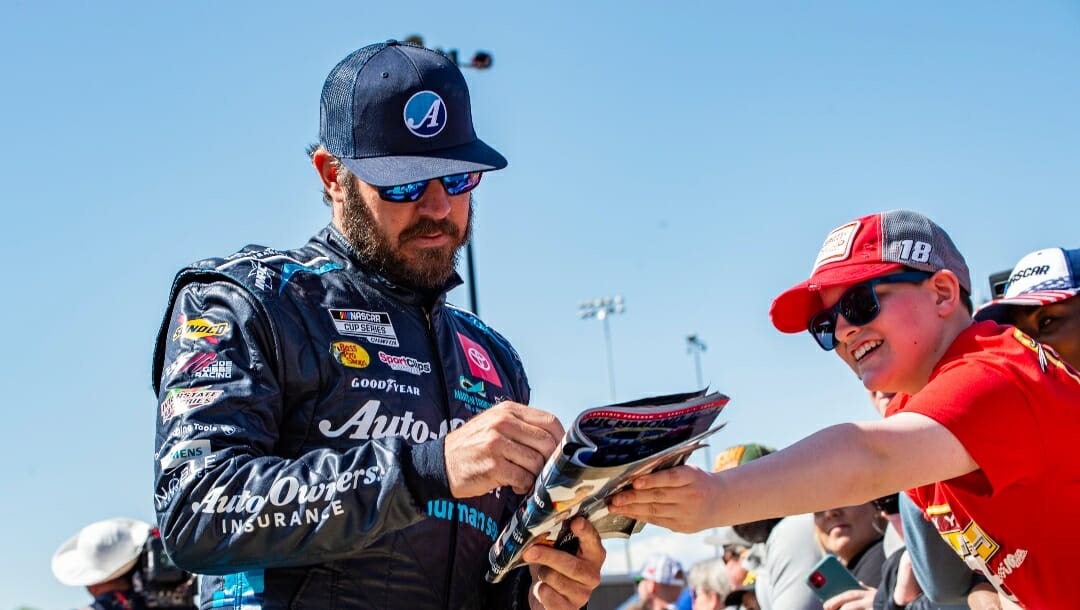 “Richmond Raceway might be Denny Hamlin’s hometown track but it’s currently owned by Martin Truex Jr.,” I wrote in a preview of Martin Truex Jr.’s featured matchup against Kyle Larson in the Toyota Owners 400.

It was a familiar feeling for the Chesterfield County, Virginia, native; he had seven top-5 finishes in nine starts at Richmond since winning the 2016 Federated Auto Parts 400.

And for 396 laps at this year’s Toyota Owners 400 it appeared Hamlin would be uttering a similar tone of regret. He led 185 of those 396 laps and sat within striking distance of the leaders, most notably Martin Truex Jr., for the other 201.

Entering the race, Truex had dominated the D-shaped, 0.75-mile track in recent years. He had three wins in the last five races – for which he had an average driver rating of 128.3, one of the highest NASCAR Cup Series ratings over a five-race stretch at one track this decade – and six straight top-5 finishes.

And bettors were buying a fourth win in six races; in NASCAR betting at BetMGM, only Kyle Busch had a higher race-winner ticket count than co-favorite Truex (+900) for the 2022 Toyota Owners 400. But instead of 7% of the tickets cashing, Hamlin figured out how to lead the last lap, securing a late lead and hanging on for his first hometown win in six years.

HAMLIN TO THE LEAD!

Four months later, it appears Hamlin’s win earned some respect with oddsmakers for the Federated Auto Parts 400, though not enough to sit ahead of Truex, who’s again the favorite in race-winner betting (+600) and an overwhelming pick among bettors with 24.4% of the handle.

Both Truex and Hamlin are also in this week’s featured matchups at BetMGM:

Truex’s top-5 Richmond streak ended in April, but with a fourth-place finish, he still carries a seven-race top-5 streak into the weekend. He hasn’t finished worse than fifth at Richmond since the 2018 Toyota Owners 400 and is looking to reassert his dominance over Hamlin and everyone else.

Kyle Busch, meanwhile, hasn’t finished better than fifth since the 2019 Federated Auto Parts 400, the first of four straight finishes within the top 10 but no better than sixth. He’s now four years removed from sweeping the track’s races in 2018, his fifth and sixth career wins at Richmond.

Kevin Harvick is the biggest underdog in featured matchup betting this week as he seeks back-to-back Cup Series wins for the first time since mid-2020.

Despite four pole positions in his last 12 starts at Richmond, he hasn’t won at the track since 2013. But the drought isn’t scaring off bettors, who are hitting Harvick with 6.5% of the race-winner handle, fourth to only Truex, Joey Logano (12.5%), and Alex Bowman (6.9%).

Both tickets and handle are currently split 50-50 between Harvick and Hamlin in their head-to-head matchup.

Chase Elliott remained No. 1 in Pat DeCola’s NASCAR Power Rankings despite a second straight finish outside the top 10 – only the third such instance since June 2021 – and at +900 in race-winner odds is within earshot of the betting favorites.

Among active drivers with more than 10 career Cup Series starts at Richmond Raceway, only Kyle Busch, Aric Almirola, and J.J. Yeley have a better average start-to-finish number than Elliott (+3.4).

Christopher Bell, meanwhile, is making his fifth career Cup Series start at Richmond. And bettors aren’t buying a win for the 27-year-old former NASCAR Truck Series champion; his 1.5% race-winner handle share ranks 17th, and he has just 6% of the handle against Elliott.

Joey Logano has more than twice as many career starts at Richmond than Ryan Blaney. He’s also won twice – Blaney hasn’t – and has a top-5 finish rate of 46%, third to only Kyle Busch (55%) and Hamlin (52%).

Cool, say oddsmakers, as they put Blaney and his zero career top-5 finishes (in 12 starts) as the favorite over Logano, presumably thanks to his strong performance – 128 laps led – in April.

The public likes Logano to win – with the 12.5% handle share on 8.1% of the tickets – but Blaney is dominating featured matchup betting with 96% of the handle and 80% of the tickets.