10 Highest-Scoring 49ers Games: Most Points Ever 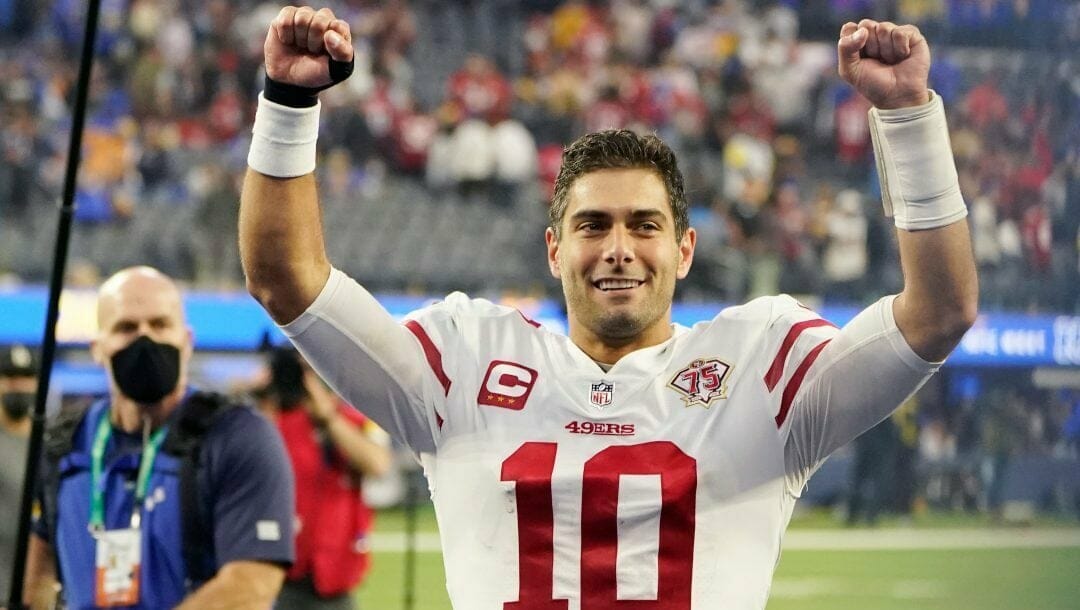 The San Francisco 49ers, who have NFL odds of +1600 to win the Super Bowl, have one of the richest histories in all of football. In their rich history, there has been no shortage of high-scoring outbursts in their matchups.

With the 2022 NFL season approaching quickly, let’s look at the most points scored in 49ers’ history.

In 1992, the San Francisco 49ers steamrolled the Atlanta Falcons 56-17. Steve Young completed 18 of 28 passes and ended his day with 399 yards, three touchdowns, and an interception. The BYU standout dominated.

Jerry Rice highlighted the receiving room as he was Young’s favorite target. Rice hauled in seven receptions for 183 yards and two touchdowns. One of the seven receptions was an 80-yard touchdown in the first quarter to help set the tone for the game.

The rushing game for the 49ers was nearly unstoppable as well. Ricky Watters led all backs with 15 carries for 75 yards and three touchdowns. Tom Rathman added a rushing touchdown of his own on only three rushes and three yards. Jerry Rice even got in on the action with one rush for 26 yards and a touchdown.

The 49ers finished the year 14-2 first in the NFC West. However, San Francisco fell to the Dallas Cowboys 30-20 in the NFC Championship game.

In the 1993 season, the San Francisco 49ers defeated the Detroit Lions 55-17. The Niners’ star quarterback, Steve Young, threw for 354 yards and four touchdowns in the win.

Jerry Rice once again stood out as the quarterback’s favorite target. The Mississippi State Valley alum caught four passes for 132 yards and a touchdown.

Tom Rathman rushed for 13 yards and two touchdowns on seven carries in the victory. Dexter Carter had a 50-yard touchdown run on his lone carry to extend the lead.

In 1991, the San Francisco 49ers stomped the Chicago Bears 52-14. Steve Young was the star in this matchup completing 21 of 32 passes for 338 yards and three touchdowns. The quarterback also managed to get the job done on the ground by turning his eight carries into 63 yards and a touchdown.

Backup Bill Musgrave also got into the action. Musgrave completed four of five passing attempts and finished with 33 yards and a touchdown.

Jerry Rice proved to be the quarterback’s security blanket in this one. The wideout reeled in five passes for 125 yards and two touchdowns, a solid performance from the star wide receiver.

Don Griffin made the defense look good with his 99-yard fumble return for a touchdown. A dominant performance on both sides of the ball for the 49ers.

In a 52-24 beatdown over the Chicago Bears, the San Francisco 49ers were firing on all cylinders. John Brodie led the charge with 269 yards and four touchdown passes. The quarterback completed 14 of 20 passing attempts in the win.

Despite only seven carries, Gary Lewis made the rushing unit look good for the Niners. Lewis rushed for 91 yards and a touchdown. John David Crow also put up 39 yards, and a touchdown on six carries for San Francisco.

The most recent win on this list comes from the 49ers’ 51-13 win over the Carolina Panthers in 2019. Quarterback Jimmy Garoppolo finished the day with 175 yards, two touchdowns, and an interception.

The 49ers rushed for five touchdowns in the win, highlighted by Tevin Coleman’s 11 rushes for 105 yards and three touchdowns. Coleman also had a receiving touchdown to add to his day. Raheem Mostert and Deebo Samuel both added in a touchdown run in the victory.

Today was a good day 😎

In 1984, the San Francisco 49ers defeated the Minnesota Vikings behind Joe Montana’s 246 yards and three touchdowns. Montana had an efficient day, completing 15 of 21 passing attempts.

In the win, Montana connected with wide receiver Renaldo Nehemiah six times. Nehemiah finished the day with 125 yards and a touchdown.

The 49ers displayed a three-headed monster in the backfield with three different backs rushing for a touchdown. Derrick Harmon led the way with 11 carries for 56 yards and a touchdown. Bill Ring and Wendell Tyler were the other two backs who managed to find the endzone.

In 2003, the San Francisco 49ers took down the Arizona Cardinals 50-14. Jeff Garcia completed 19 of 28 passes for 252 yards and four touchdowns. The San Jose State prospect also rushed for two touchdowns.

A strong connection between Garcia and Terrell Owens was also displayed. Owens caught seven passes from Garcia for 92 yards and two touchdowns.

Kevan Barlow put on a show out of the backfield in this one. Barlow had 18 carries for 154 yards and a touchdown.

In the 1994 season, the San Francisco 49ers handed the Atlanta Falcons a 50-14 loss. In the victory, Steve Young threw for 294 yards, three touchdowns, and an interception. The quarterback added two rushing touchdowns.

In 2003, Jeff Garcia and the San Francisco 49ers took down the Chicago Bears in dominant fashion, 49-7. Garcia passed for 229 yards to go along with two touchdowns, and an interception.

Ahmed Plummer put the defense in the headlines with his 68-yard pick-six.

Three different receivers caught a touchdown pass from Steve Spurrier, but Ted Kwalick had the most significant performance. Kwalick hauled in four passes for 77 yards and a touchdown.

Vic Washington led the 49ers backfield with 15 carries for 56 yards and a touchdown.