10 Highest-Scoring Broncos Games: Most Points Ever 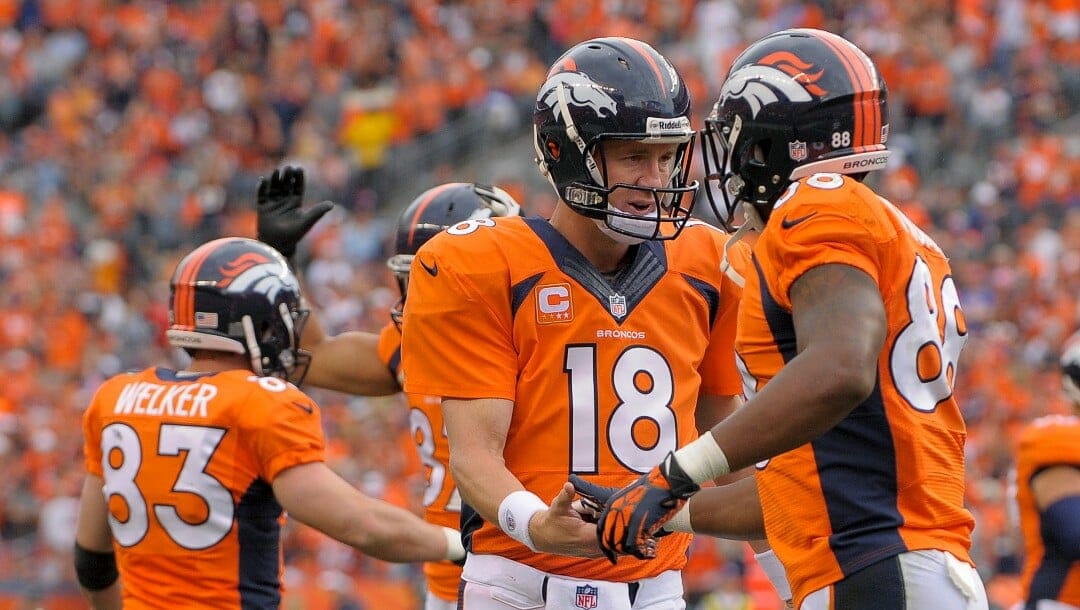 The Denver Broncos have fielded some of the best offensive teams in NFL history and obliterated many NFL betting over/under totals along the way.

What’s the Broncos’ record for most points in a single game?

10 Highest-Scoring Broncos Games: Most Points Ever

This was good year for the Denver Broncos, and it had their highest-scoring game in franchise history.

Peyton Manning had a 146 quarterback rating, throwing for 327 yards and four touchdowns in the team’s beat down of the Philadelphia Eagles.

Peyton Manning had a field day against the Tennessee Titans on offense, throwing for nearly 400 yards and four touchdowns.

Four wideouts caught touchdown passes in the lopsided affair, including Eric Decker, who led the game with eight receptions for 117 yards and a score.

This was one game that put Titans’ head coach Mike Munchak among NFL coaches on the hot seat, which ultimately led to his dismissal.

In the game of the year in 2013, the Denver Broncos outlasted the Dallas Cowboys 51-48.

Peyton Manning and Tony Romo had no issues passing in this game, combining for 920 yards and nine touchdowns. Matt Prater ultimately sealed the game late with a 28-yard field goal.

Goose Gonsoulin had a 43-yard interception return to the house to put it to the San Diego Chargers in the fourth quarter, while Donnie Stone was great on the ground, rushing for 104 yards and a touchdown on 17 attempts.

The Denver Broncos opened up the 2013 campaign in Week 1 against the Baltimore Ravens, which saw them lay a beating on the AFC North club.

Peyton Manning threw for a game-high 462 yards, while the late Demaryius Thomas had a pair of touchdowns and 161 receiving yards.

The Kansas City Chiefs have had plenty of close games in their rivalry, but this wasn’t one of them, which saw the Broncos blow out the Chiefs, 49-29.

Kyle Orton was great in the pocket, chucking four touchdowns and totaling 296 yards through the air.

In a close game before the final quarter, the Denver Broncos scored 21 unanswered points in the fourth to blow out the Philadelphia Eagles 49-21.

The ground game was key for Denver in this significant victory, rushing for 255 yards and three touchdowns.

The defense was the story in the Mile High City for the Broncos’ thrashing of the Tampa Bay Buccaneers in 1976.

Two pick-sixes by the defense and a Randy Poltl 26-yard fumble return were big keys to their lopsided victory.

Charley Johnson wasn’t busy at quarterback in the Broncos’ victory over the Houston Oilers in 1973, which saw him complete just nine passes.

Luckily for him, four of those completions were for touchdowns in Denver’s big win over the Oilers.

Peyton Manning was great at moving the ball down the field in the Broncos’ victory over the Oakland Raiders, but he didn’t have to finish the job. C.J. Anderson rushed for 87 yards and plunged into the endzone on three occasions, helping Denver beat up their long-time rival.