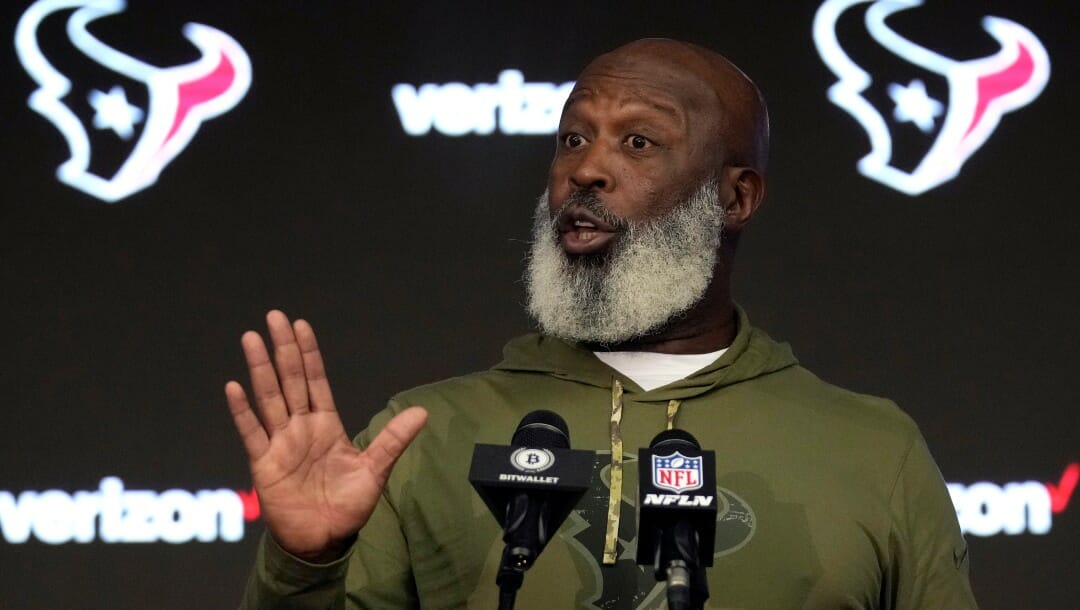 Nineteen NFL head coaches have been in their current position for two or fewer seasons. Ten of those coaches were hired after the conclusion of the 2021 season as unprecedented turnover wiped out nearly one-third of head coaches across the league.

Here are potential hot seat coaches and their replacements if fired.

NFL Coaches on the Hot Seat

It takes a lot for a first-year coach to land on a midseason hot seat. Either you kick your kicker or your talented team led by a $245-million quarterback isn’t good.

After a loss to the Carolina Panthers in Week 12, the Broncos are on pace for their worst record in 12 years. And with the league’s worst offense struggling to score 14 points each week, things are so bad in Denver that Hackett’s first head-coaching job might be done after a year.

Unless the Broncos are terrified of another first-time head coach – or Bienemy is terrified of coaching Russell Wilson – you’d think the former Colorado Buffaloes star is the obvious target to fix a pathetic offense.

In the three years prior to Kliff Kingsbury’s arrival, the Cardinals had 18 total wins and were outscored by a total of 190 points. He had 19 wins in his first two years, during which he’s led the franchise’s third-best two-year point differential improvement in the last 45 years.

Kingsbury has undoubtedly proved to be a decent hire. But when a 7-0 start ends with an 11-6 regular-season record and a blowout loss in his lone playoff appearance as head coach – and a 4-8 start in 2022 – little else matters and as a result, he’s likely on the hot seat.

Replacement: Historically, college football and NFL teams zig after zagging led to an unsuccessful hire, as they did with Kingsbury, a young college coach with zero NFL experience, after a dud season from Steve Wilks, a longtime NFL assistant.

If owner Michael Bidwell and general manager Steve Keim – assuming he’s allowed to make a fourth hire instead of searching for a new job – employ a similar strategy but to a lesser degree, might they consider San Francisco 49ers’ defensive coordinator DeMeco Ryans or Ejiro Evero?

Shockingly, Lovie Smith isn’t the answer to the Houston Texans’ organizational issues that led to a collapse from annual AFC South contender to the league’s worst team.

Smith is just 9-32-1 in his last three seasons as an NFL head coach. And while he should carry minimal responsibility for this year’s 1-9-1 record, he’s clearly not the short- or long-term answer for a franchise wandering through futility.

The Los Angeles Chargers have been gutted by injuries. But even without those injuries, this is a fringe playoff team being outcoached most weeks.

Staley’s inexperience – he was a Division-III assistant in 2016 – repeatedly showed last season. And with Justin Herbert nearing a massive contract, is the front office willing to let their franchise quarterback wander through mediocrity for a fourth straight season?

Replacement: Bienemy was in the mix two years ago, as were two coordinators who are now head coaches elsewhere, Brian Daboll and Matt Eberflus.

If they didn’t want Bienemy in 2021 and don’t want Bienemy in 2023, perhaps they’d take a swing at Cincinnati Bengals’ offensive coordinator Brian Callahan or Staley’s former colleague Shane Waldron. The 43-year-old Waldron was a Rams’ assistant from 2017-20 before taking over the Seahawks’ offense in 2021.