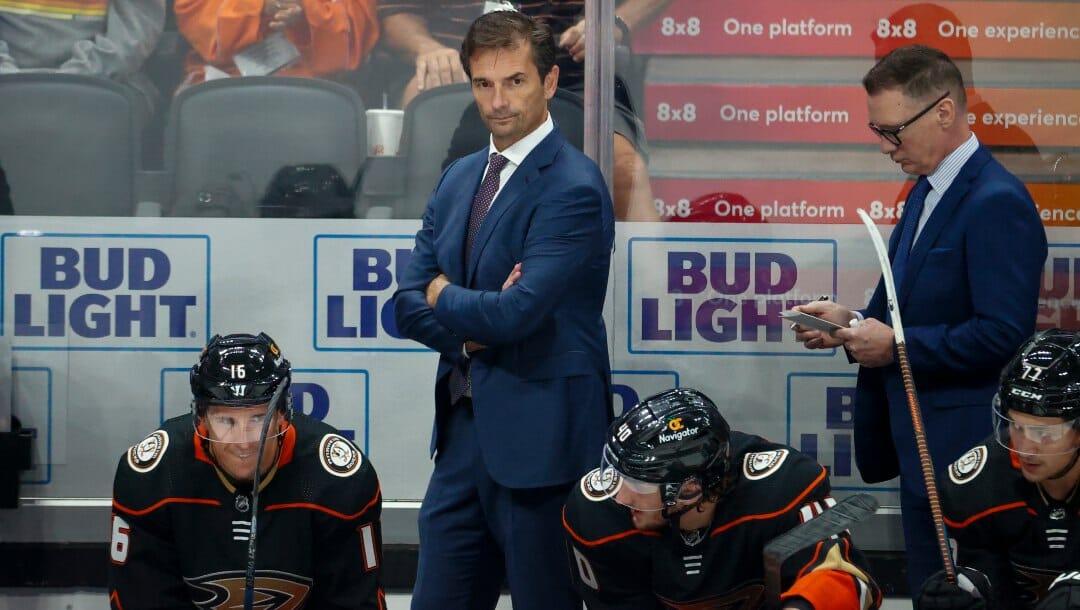 It’s still relatively early in the 2022-23 NHL season, but a few coaches are already feeling the heat.

NHL odds have the Senators and Canucks as astronomical outsiders to hoist the Stanley Cup (+5000).

Even though the coaches on the hot seat aren’t expected to lead their teams to supremacy, each ownership group expects tangible improvement. If they don’t see it, the following coaches might soon be in the market for another job.

So which NHL coaches are feeling the heat?

NHL Coaches on the Hot Seat

It’s pretty much inevitable Bruce Boudreau will be fired at this point — it’s now just a discussion of when.

The Canucks have had a disastrous start to the 2022-23 season. With a record of 4-9-3, the team is ranked 30th in the league, with only the Blue Jackets and Ducks saving them from last place. Hockey is an unforgiving business and the buck stops with the head coach, which places Boudreau firmly in the hot seat.

To be fair to Boudreau, the coach earned deserved plaudits for turning the dire situation around in Vancouver last season. After his appointment, the Canucks secured the second-best record by points percentage in the Pacific, and that’s nothing to scoff at. Still, last season is in the past, and something needs to be done about the 2022-23 Canucks.

Jim Rutherford, the Canucks president of hockey operations, spoke in October about wanting to hold players accountable for poor performance, but does that sentiment extend to the head coach? With fans booing the Canucks off the ice, I can’t see Boudreau staying in his position too much longer.

With the Ducks currently in last place in the league, head coach Dallas Eakins is running on borrowed time. With Eakins in his fourth year at the helm, Anaheim has an abysmal record of 4-10-1.

The Ducks are admittedly still deep in a rebuild, so the fact the team hasn’t made the playoffs in Eakins’ reign isn’t a black mark on the 55-year-old’s coaching resume. The team is led by a talented young core that should be playoff ready in the next couple of seasons, but the question is now about whether or not Eakins will be in Anaheim to see it.

Eakins wasn’t hired by Pat Verbeek, the Ducks’ new GM. He was a carry-over from the previous era and is likely to be an easy cut now that Verbeek wants to appoint a head coach that he hand-selects.

As the gap between Anaheim and the playoffs continues to grow, I’ll be shocked if Eakins is still in charge of the Ducks come Christmas.

Currently in second-to-last place in the league with a record of 4-9-1, the Blue Jackets are a mess, and all fingers are pointing at head coach Brad Larsen.

Larsen replaced John Tortorella as the Blue Jackets’ bench boss after seven years as an assistant coach. His first season at the helm saw the team finish 10th in the Eastern Conference — not great, but enough to justify another season. At least, that’s how the management team felt then.

Columbus made a splash by adding Johnny Gaudreau in the summer, immediately raising expectations. Losing Patrik Laine to an elbow injury in the season opener complicated things, but fans still wanted to see decent things from the Blue Jackets. Nobody thought Columbus would be contending for the Stanley Cup this season, but even fans with the most modest expectations have been pretty disappointed so far.

The Blue Jackets’ president of hockey operations John Davidson and GM Jarmo Kekalainen still have Larsen’s back, but he needs to show progress — and quick — if he wants to remain behind the bench long-term.

During the offseason, the Senators were hyped up as contenders for the Stanley Cup this season. The team brought on Claude Giroux, Alex DeBrincat, and Cam Talbot, so expectations were very high. It didn’t take long for fans to recognize that things weren’t exactly going to plan.

The Senators currently have an underwhelming record of 5-9-1. Talbot suffered an upper-body injury in training camp, keeping him out of the lineup until the first week of November, but that still isn’t a great excuse for the team’s underperformance.

GM Pierre Dorion recently stated that Smith has his full support and wouldn’t be fired, but this certainly wouldn’t be the first time a GM has had to eat his words. If the distance between the Sens and the playoffs continues to grow, he may just have to.