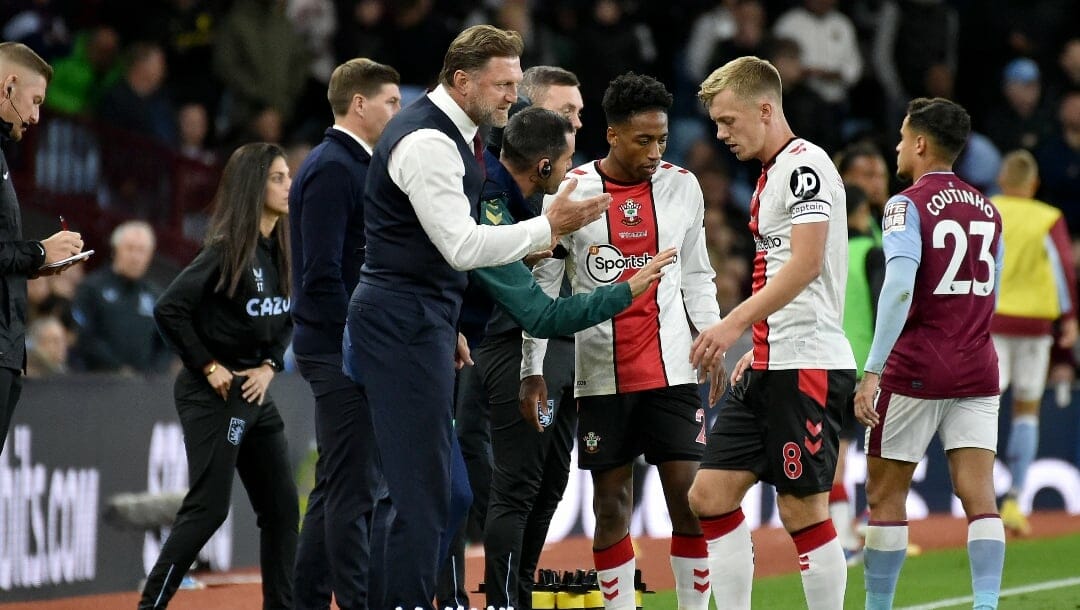 Three managers’ positions at their respective clubs became more tenuous after further disappointments on Matchday 10, so who is the next to fall?

Premier League odds have Nottingham Forest as favorites to make the drop (-303), which won’t come as a surprise if you’ve tuned into their recent matches.

Bournemouth is the second favorite to return to the Championship (-120) despite moving up to eighth in the table after beating Leicester 2-1 at home. After that abject defeat, Leicester moved to third relegation favorites (+200).

Expect the ax to fall on at least one manager with another poor result or two. So here are the managers on the hot seat entering Matchday 11, a few hanging on by the thinnest of threads.

Alarm bells stopped ringing in east London, at least for the time being.

David Moyes has all but distanced himself from peril at West Ham. His side prevailed 3-1 at home over Fulham, albeit controversially after two missed handballs on the Hammers’ second and third goals.

Two wins on the bounce have allayed fears of Moyes losing his job.

Hey Siri, show me what a beautiful goal looks like 😍 pic.twitter.com/4P4MArJZlZ

He’s not completely clear of stormy waters, but another positive result should do the trick. West Ham travels to Southampton to face another embattled manager, whose job is in an immeasurably more precarious position.

Moyes has relied on timely goals from recent signing Gianluca Scamacca, who has two in his last two Premier League starts. The Hammers leapfrogged into 13th place with the crucial victory and are tied with Liverpool, Brentford, and Everton (10 points apiece).

After Nottingham Forest’s 4-0 lopsided defeat to Leicester, Steve Cooper signed a new contract that runs until 2025. For some, his new contract came at a perplexing time.

However, the club  understands Cooper’s predicament and wants to show proof of faith in their gaffer. Cooper saw as many as 20 players leave the club during the offseason, causing unprecedented disruption.

Cooper needs time to source his best formation, tactics, and starting 11, which should be forthcoming. However, the new contract doesn’t provide guaranteed immunity for Cooper in perpetuity. The gaffer still needs to show tangible improvement, which includes some positive results.

Full of praise for your support last night. ❤️

The severance pay he’d receive hasn’t changed much after inking the new deal, so there’s still a chance he’ll lose his job before the season’s end.

Cooper’s side acquitted themselves well against Aston Villa on Matchday 10, committing to a gritty home performance that earned them an invaluable draw.

Nottingham Forest was expected to be relegated before the season started, so the club should give Cooper the benefit of the doubt, particularly after stewarding them into the Premier League for the first time since 1998-99.

The pressure is well and truly back on Steven Gerrard, whose side failed to beat Coopers’ beleaguered Nottingham Forest. Another languid draw has the heat turned up on Gerrard, who hasn’t been able to steer his side to an away victory in five attempts.

The performance at City Ground was decent but lacked the quality required in front of the goal.

While he deserves credit for Villa’s recent resoluteness, his side’s anemic offense and inability to score could test the ownership’s resolve where Gerrard is concerned.

The 1-1 draw at Nottingham Forest fell well below the club’s expectations. Aston Villa deserved more on the balance of play but will quickly be dragged into the relegation donnybrook if Danny Ings, Philippe Coutinho, and Ollie Watkins continuously fire blanks.

The missed opportunities against 10-man Leeds and Nottingham Forest considerably dilute Aston Villa’s four-match unbeaten run. But, behind the scenes, I’m sure it doesn’t feel like a club that hasn’t lost since a 2-1 setback to Arsenal at the end of August.

Aston Villa is staring down the barrel of an unforgiving test against a resurgent Chelsea. The following two contests – away to Fulham and home against Brentford – could decide Gerrard’s fate.

It was one step forward, two steps back for Brendan Rodgers on the south coast. The memory of his side’s emphatic 4-0 win over Nottingham Forest was wiped clean after losing 2-1 to fellow relegation-favorite Bournemouth.

The Foxes took the early lead at the Vitality Stadium but again failed to hold on to it. Rodgers’ side has dropped 12 points from winning positions  in just nine matches.

They haven’t managed a single point in five away contests, the Premier League’s most abject record.

Leicester’s reaction after coughing up the lead and going down a goal against Bournemouth should gravely concern the ownership group. The discernible absence of fightback and palpable lack of character must have many wondering when, not if, the ax will fall.

Leicester’s next three matches – at home against Crystal Palace and Leeds and away to Wolves – should prove conclusive. If Leicester loses two of three, Rodgers will likely be provided his marching orders.

Ralph Hasenhuttl is clamoring for air in an oxygen-depleted room. His tenure at Southampton is quickly becoming untenable.

While the Austrian won’t be judged harshly for losing 4-0 to Manchester City, Southampton is teetering dangerously close to the relegation zone, just a point ahead of 18th-place Wolves.

The boss reflects on a difficult afternoon at #ManCity:

They’ve won three of their previous 21 matches dating back to last season under Hasenhuttl’s stewardship. Reports suggest  he is losing the locker room if he hasn’t lost it entirely already.

The Saints welcome West Ham to St. Mary’s Stadium on Sunday. Anything but a win will almost certainly see Hasenhuttl’s time as Southampton’s manager come to a bitter end.