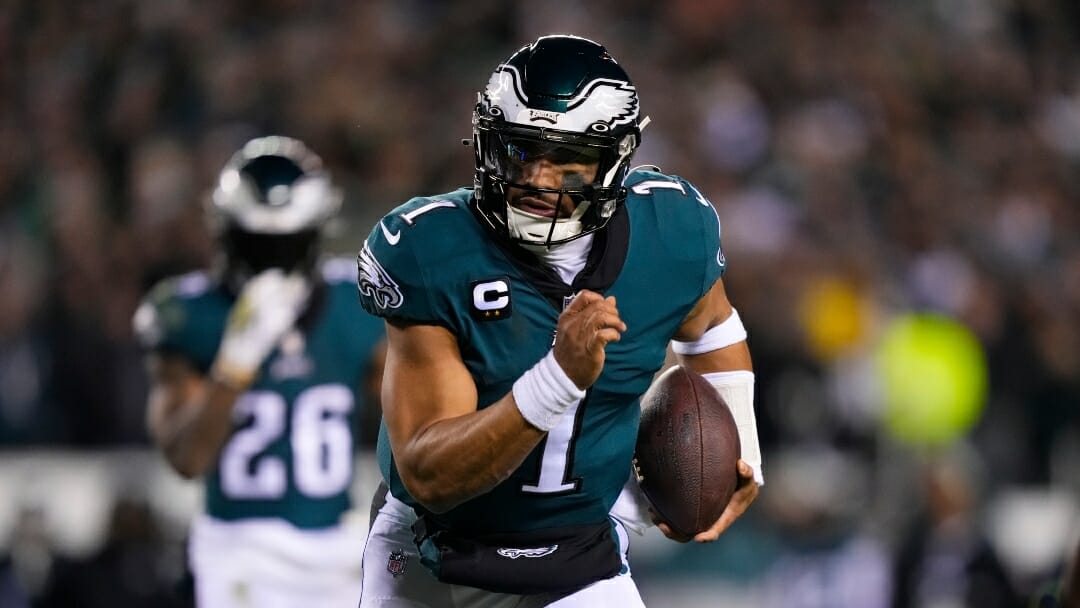 In the previous 61 editions of the Super Bowl, only nine have featured MVPs on the defensive side of the ball, and only one has been on the losing team.

So when it comes to Super Bowl MVP NFL odds, it’s worth leaning toward offensive players that have the best chance to be on the team that’s ultimately lifting the Lombardi Trophy.

Here are the Super Bowl MVP odds as of Jan. 24.

Here are my favorite Super Bowl MVP value bets at the BetMGM online sportsbook entering the conference championships in the playoffs.

While he did miss a few weeks due to injury, he looked like he was ready for a deep playoff run after that blowout win over the Giants in the divisional round of the playoffs. I believe the Eagles have a great chance of winning the Super Bowl, and Hurts would be a clear pick for Super Bowl MVP if they did.

The Jalen Hurts to AJ Brown connection is back.

Though he’s regarded as one of the best players at his position ever, Chiefs tight end Travis Kelce has never been an MVP or Super Bowl MVP in his career. That could change soon.

Fittingly, quarterback Patrick Mahomes is the frontrunner for this award at the moment. But if the Chiefs do win the title this season, I wouldn’t be surprised if Kelce is considered for this accolade.

Kelce would probably have to tally a couple touchdowns to become the Super Bowl MVP over Mahomes, but that’s not impossible. In fact, he did so last week against the Jaguars in the divisional round. He’s also compiled six 100-yard games this season.

.@tkelce is that dude. 💯 pic.twitter.com/TFaGAR9AhM

While the 49ers aren’t my favorite Super Bowl bet right now, I can easily see a situation where running back Christian McCaffrey is the Super Bowl MVP pick. Since McCaffrey was traded to the 49ers, he’s provided the offense a spark it needed.

I question if rookie quarterback Brock Purdy will be good enough for the 49ers to win a title. But if they do despite a mediocre game from Purdy, McCaffrey will have probably done enough to earn some consideration for this accolade.

CMC puts the @49ers ahead! #NFLPlayoffs

Since the Eagles are my second-favorite pick to win the Super Bowl at this point, wide receiver AJ Brown should make this list considering how well he’s played this season. He earned a Pro Bowl nod for good reason.

If they get past the NFC Championship, the Eagles would either face the Bengals or the Chiefs in the Super Bowl. I think either of those teams would be favorable matchups for Brown, who could probably get up to 150 yards and two touchdowns against those secondaries.

The Jalen Hurts to AJ Brown connection is back.

I’m expecting momentum to run out for the Bengals sometime soon. But if it doesn’t, quarterback Joe Burrow would be the obvious pick for Super Bowl MVP.

Burrow not only has been poised in pressure situations, he’s been the MVP for this team since he was drafted as he helped change the direction of the franchise. If the Bengals win it all and Burrow has even a pedestrian performance, he would deserve this award.

Joe Burrow had himself a Dey in Buffalo. 🐅@JoeyB | @bengals pic.twitter.com/qXVLX2lfGb