10 Highest-Scoring Saints Games: Most Points Ever 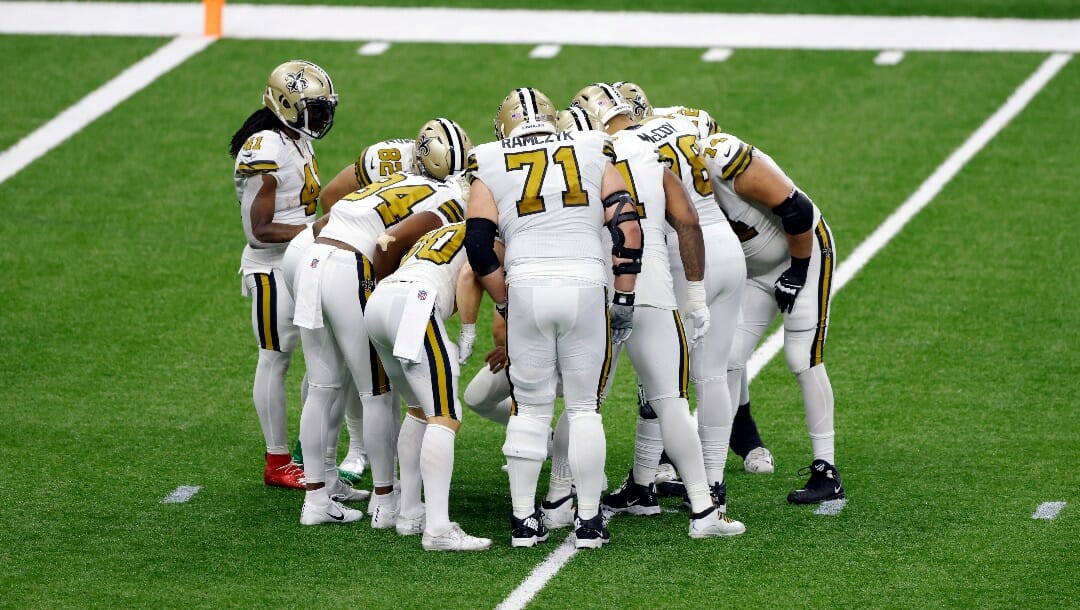 The New Orleans Saints offense might look a lot differently in 2022 – as they seek a return trip to the playoffs, for which they have plus odds in NFL betting – than it did a few years ago when the high-powered attack was lighting up scoreboard.

For more than a decade, the Saints had one of highest-scoring offenses in NFL. Under the tutelage of Sean Payton, Drew Brees and his army of weapons routinely topped 40 and 50 points in a game.

Highest-Scoring Saints Games: Most Points in a Game

The Saints showed zero mercy when the Indianapolis Colts showed up to the Superdome on Sunday Night Football without Peyton Manning.

In a game where he had 25 passing attempts, Drew Brees threw for more touchdowns than incompletions. Curtis Painter and Dan Orlovsky combined for just over 100 passing yards for the Colts as this remains tied for the sixth-biggest blowout in NFL history.

It was a Christmas Day beatdown by New Orleans on the Minnesota Vikings as Alvin Kamara made plenty of fantasy owners happy in their playoff matchups.

The five-time Pro Bowler became just the third player in NFL history to score six touchdowns in a game while also notching 172 yards from scrimmage. It remains one of the best single-game performances by a player the league has ever seen.

Saints offense is missing Michael Thomas and put 52 on the Vikings. Damn.

This was a game of momentum for all 60 minutes as the Saints took a monstrous 45-10 lead midway into the third quarter, only to let it diminish as fast as it built.

In 14:15, the Lions scored four consecutive touchdowns to get within a touchdown before New Orleans would put it to bed with a Cameron Jordan pick-six. It was one of the Lions’ seven losses on the season, which proved to be the last for head coach Jim Caldwell, who seemed to spend most of his final three years on the NFL hot seat.

Here’s another game the Saints didn’t want to make easy.

After taking a 42-28 lead into the fourth quarter, New York stormed back to tie it at 49 with just 36 seconds to play. During a return in the dying seconds, Giants punter Brad Wing committed a bone-headed facemask penalty that would put the Saints into field goal range, where Kai Forbath would give them the win from 50 yards out.

This game was amidst an incredible New Orleans offense scoring streak. In the week prior, the Saints dropped 45 points on the Rams, while they would go on to hang 48 points on the Eagles the following week. This one takes the cake, though, as the Saints would score on all nine possessions in the game en route to the blowout win.

On this day, Aaron Rodgers did something he has done just four times in 213 career games.

The future Hall of Famer tossed three interceptions in the loss, which may have made the difference in the outcome. The Saints only outgained the Packers 416 yards to 343, while New Orleans had less possession of the ball. Credit to Brees as well for tossing four touchdowns and no picks.

In our first trip back to the 20th century on this list, you’d be surprised that this was the stat line of the winning quarterback: 12-for-21, 115 yards, zero touchdowns, and two interceptions.

That was what Saints signal-caller Bobby Douglass produced in this one, but it doesn’t matter much when you rush for 258 yards and four touchdowns as a team.

We go even further back to the pre-merger era, and this matchup was as explosive as it gets. Starting quarterbacks Billy Kilmer and Charley Johnson each threw six touchdowns, while Cardinals wide receiver Dave Williams hauled in four.

The Saints put up a balanced effort in this win with 209 rushing yards, 360 passing yards, and seven total touchdowns.

The most exciting part of this game came when wide receiver Willie Snead tossed this touchdown pass to running back Tim Hightower for a 50-yard score. It’s the only passing attempt of his seven-year career.

They combined for 49 first half points

New Orleans played well in this win, but the Cowboys were startlingly bad. Dallas had a grand total of 193 yards while the Saints accrued 625 yards and had the ball for over 39 minutes of the game. The Saints also converted nine-of-12 third downs while the Cowboys failed to convert a single third down all game.