Jimmy Garoppolo Contract: When Is 49ers Quarterback a Free Agent? 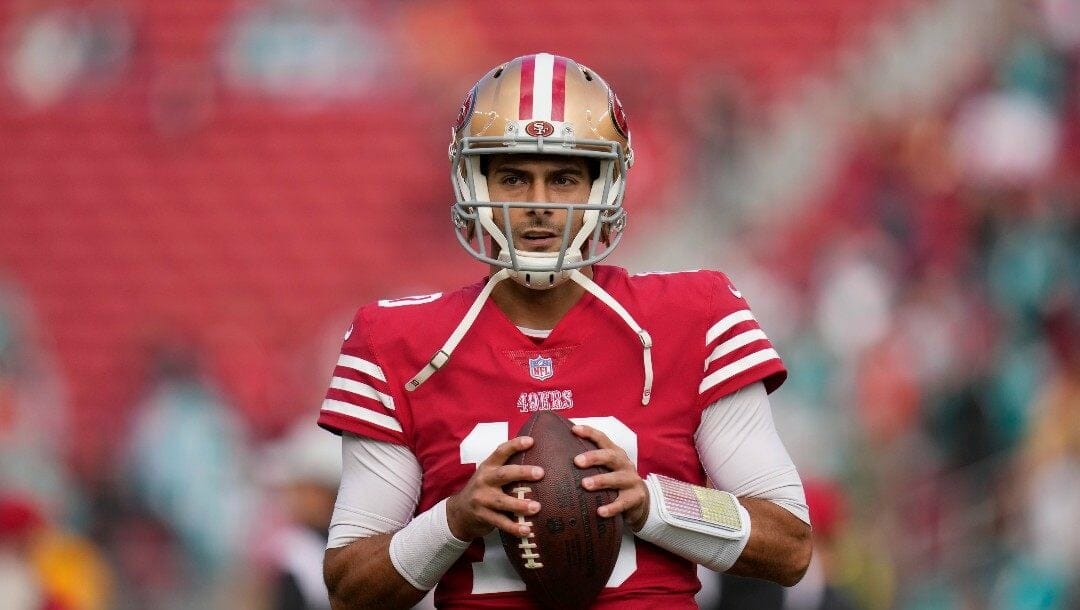 Throughout Jimmy Garoppolo’s career, he’s been on several teams with the best NFL odds in the league.

Before getting injured in 2022, Garoppolo had a record of 40-17 as a starter during the regular season and was 5-2 in the postseason.

This past season was his sixth in San Francisco, and with younger quarterbacks, Brock Purdy and Trey Lance in the picture, Garoppolo’s future with the 49ers is up in the air.

Prior to the 2022 season, Jimmy Garoppolo signed a one-year, $7 million contract with the 49ers.

He was expected to serve as Trey Lance’s backup, but he took over as the starter following Lance suffering a season-ending ankle injury in September.

Garoppolo broke his foot in an early December game. Purdy, a rookie, took over and reportedly will be the team’s quarterback for the remainder of the season.

What Is Jimmy Garoppolo’s Salary?

Jimmy Garoppolo’s salary for the 2023 season was $7 million.

Throughout Jimmy Garoppolo’s career, he’s made over $125 million, according to Spotrac.

Jimmy Garoppolo will be a free agent when the new league year begins on March 15. He’ll be able to sign with any other team and will likely be one of the top quarterbacks available.

Other quarterbacks who will be free agents include Derek Carr, Lamar Jackson and Tom Brady.

Here are teams that could potentially be interested in Jimmy Garoppolo when he becomes a free agent: New York Jets, Las Vegas Raiders, New Orleans Saints and Houston Texans.

The Raiders are interesting, considering Josh McDaniels, his offensive coordinator in New England, is Vegas’ head coach. They’re rumored to be interested in Tom Brady, but if they cannot land Brady, they may settle for Garoppolo.

Garoppolo also has a connection in Houston with general manager Nick Caserio. Caserio was in New England during Garoppolo’s three seasons with the Patriots.

The Jets and Saints will likely both be in the quarterback market and could also be options.