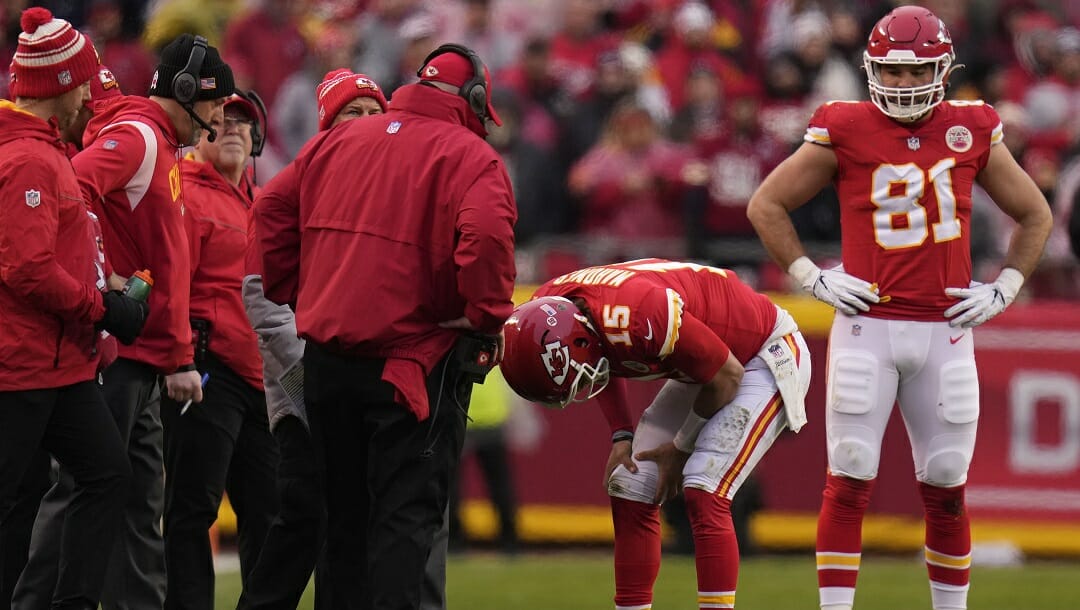 There was a critical development in Kansas City on Saturday afternoon, as Chiefs quarterback Patrick Mahomes left the playoff game against Jacksonville with an ankle injury.

NFL odds are in a total state of flux, with the futures market temporarily unavailable at the BetMGM online sportsbook.

Many bettors that backed the Chiefs in their NFL divisional round picks were left sweating.

Did Patrick Mahomes Get Hurt?

Yes, Chiefs quarterback Patrick Mahomes suffered some kind of leg or ankle injury. It wasn’t enough to permanently knock him out of the game, though he did miss significant time during the first half.

Kansas City quarterback Patrick Mahomes was temporarily knocked out of the game after a bad hit from Jacksonville awkwardly rolled his right leg and ankle. On Sunday, team doctors were able to confirm that Mahomes suffered a high-ankle sprain.

How Bad is Patrick Mahomes’ Injury?

A high ankle sprain isn’t something that easily goes away. Low ankle sprains can often heal over the course of a week, but Mahomes’ more serious version of the injury is likely to leave him at least partially hobbled for the remainder of the playoffs.

Most athletes need at least three or four weeks to fully recover from a high ankle sprain, which means Mahomes could still be hurt even if the Chiefs play in the Super Bowl on February 12.

However, Mahomes was able to play throughout the second half against Jacksonville, so he may be able to play next week with heavy tape and/or pain-killing injections.

At the BetMGM online sportsbook, the Chiefs opened Sunday evening as 1.5-point favorites over the visiting Bengals in next weekend’s AFC Championship game.

Chiefs quarterback Patrick Mahomes upgraded his playoff record to 9-3 after a gutty win over the upset-minded Jacksonville Jaguars in the divisional round of the NFL playoffs.

How Many Years Has Patrick Mahomes Been in the NFL?

Patrick Mahomes was drafted with the 10th overall pick in the 2017 NFL Draft, which makes this his sixth season as an NFL quarterback.

How Many Times Has Patrick Mahomes Been to the Super Bowl?

Patrick Mahomes has taken the Chiefs to the Super Bowl twice. He beat the 49ers in Super Bowl LIV, 31-20, but lost to the Bucaneers one year later.

Who Is Patrick Mahomes Backup?

Chad Henne is Patrick Mahomes’ backup quarterback in Kansas City. He’s served as the No. 2 man on the Chiefs’ depth chart since 2018.

How Old is Chad Henne?

Henne is no stranger to big moments under center. The current Kansas City backup started 53 games for the Dolphins and Jaguars from 2009-2013.

Henne started one game for the Chiefs in 2020 and played critical fourth-quarter minutes during a 2020 divisional game against the Cleveland Browns.