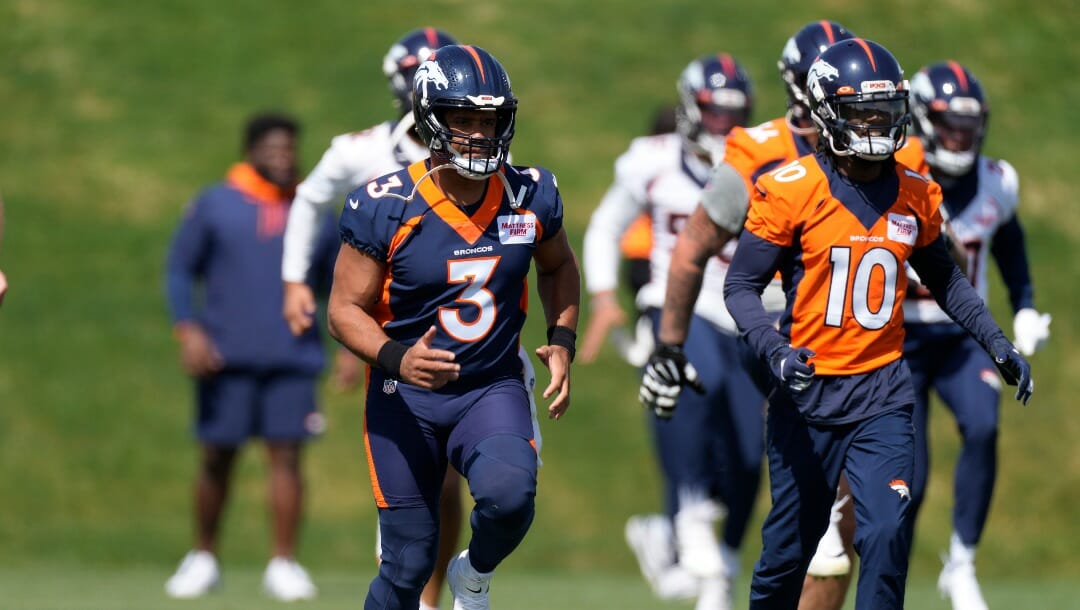 The Denver Broncos’ acquisition of Russell Wilson sent the futures market into disarray.

Denver rocketed up Super Bowl odds and, as of mid-August, are at +1600 in NFL odds at the online sportsbook. The Broncos weren’t expected to compete with their former roster, but having a nine-time Pro-Bowler under center changes things.

Their young and inexperienced roster had a Super Bowl-winning quarterback guiding them to a brighter future, emphasizing winning now. There’s plenty to be excited about in Denver, but you have to learn how to succeed in the NFL, and the Broncos might have a few hard lessons on the horizon.

Denver has spent the last few drafts stocking their franchise cupboards with young, offensive stars ready to shine. Courtland Sutton was the first player to arrive, followed by Jerry Jeudy and Javonte Williams last year. All three players will improve with Russell operating the offense, but each player has red flags to consider.

Wilson & Hackett is such a beautiful marriage.

I'm thinking about how well Wilson works the backside 1 on 1 with how much Hackett likes to use the big alert availability for the QB.

Most will say plug Cortland Sutton in there, however, IMO I want to see Jerry Jeudy in that role

Sutton has been in the league for four seasons and hasn’t surpassed a catch rate of 59.2%, posting a career mark of 56.1%. Similarly, Jeudy had a concerning drop rate in his rookie season, hauling in just 46.0% of targets.

Although he made huge strides in his second professional campaign, he was limited to just ten games, watching his catch rate improve to 67.3%, but his yards per reception go from 16.5 to 12.3. Indeed, Russell will find his new receivers; however, there are some concerns about their effectiveness.

Nothing bad can be said about Williams’s performance from his first season. The North Carolina alum averaged 4.4 yards per carry and played in all 17 games. Still, the Broncos are already on the record for noting that the backfield tandem of Williams and Melvin Gordon will operate on a “pitch count,” limiting Denver’s ceiling.

These up-and-comers will eventually flourish, but it may take some practice with Wilson and a change in philosophy before they unlock their full potential.

The way this season is shaping up, we may need to rename the Broncos’ division the AFC Best. Every team got better in the offseason, and that’s reflected in their Super Bowl odds.

Three of the four contenders are priced at +1600 or better, with the Las Vegas Raiders bringing up the rear at +4000. Using the Super Bowl futures board as a pseudo-power ranking means the Broncos are perceived to be weaker than two division foes. F

actoring in their relatively inexperienced roster and the winning culture they need to cultivate, the bar may have been set too high for Denver ahead of the 2022 season.

This will be a season of change for the Broncos, but it may not be as successful as the betting market implies. Finessing their way through an offseason of changes takes time, which isn’t afforded to them in the composition of the AFC West.

The playoffs aren’t out of the question, but there’s a jump in class between the top teams in the NFL and the Broncos, which isn’t reflected in the Super Bowl futures market.

For me, it’s a pass on Denver at the current price.