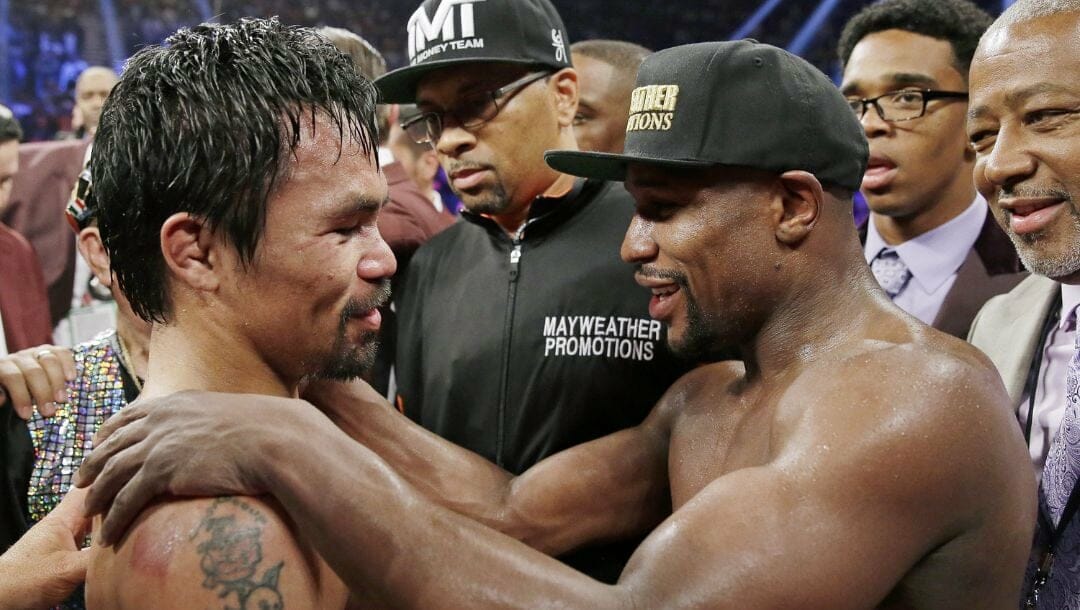 Boxing’s greatest fighter may be hard to identify due to the wealth of great athletes who graced the ring throughout its history. But the undisputed king of boxing pay-per-views is none other than Floyd Mayweather Jr., who owns four of the top five biggest pay-per-view buys in history.

Because of this, he became a perennial contender in online boxing betting as fans and bettors often see him as the favorite in the boxing odds due to his undefeated record of 50-0.

Besides Mayweather Jr., who else was part of the biggest pay-per-view events in boxing history? Let’s find out in this list.

After multiple failed attempts to make the fight happen, Floyd Mayweather Jr. and Manny Pacquaio finally crossed paths in May 2015 for the biggest pay-per-view fight in boxing history. It was dubbed the ”fight of the century,” where two of the best pound-for-pound fighters who held multiple titles across different weight classes collided. It generated 4.6 million pay-per-view buys.

Although the bout was lackluster, with ”Money” Mayweather flexing his defensive prowess and counterpunching specialty, it was still an entertaining fight. Mayweather came on top with a masterful unanimous decision victory over the Philippines’ fighting pride as the three judges favored him on the official scorecards.

Floyd Mayweather Jr. and Conor McGregor were two of the most colorful personalities and trash-talking individuals in combat sports. They produced the second-highest pay-per-view fight in boxing when the UFC superstar agreed to fight the seasoned champion in August 2017. The total PPV buys went as high as 4.3 million, anchored by the appealing press conferences filled with trash talk during the build-up.

The Irish icon found success in the early rounds as he had some moments in the opening rounds of the fight. Still, the ever-smart veteran Mayweather finished off his foe in the 10th round via TKO as McGregor was visibly gassed out in the latter rounds of the fight.

The coming out party of Floyd Mayweather Jr. happened in May 2007, when he faced Oscar De La Hoya for the WBC Super Welterweight Title, which generated the first 2 million pay-per-view mark (2.4 million in total) in boxing history. It was also the changing of the guard as to who is the face of the sport as the younger Mayweather edged out the veteran De La Hoya in a split decision win to solidify his place as boxing’s biggest star.

Another blockbuster fight that Floyd Mayweather Jr. was involved in was his August 2013 showdown with a young Canelo Alvarez. It was dubbed a passing of the torch as Alvarez was an undefeated, streaking fighter who could end Mayweather’s reign where the WBC and WBA Super Welterweight Titles were on the line.

But the American stamped his class over the rising star and scored a majority decision win to delay the complete ascent of Alvarez to the sport. Mayweather put the youngster into a boxing clinic throughout 12 rounds to remain the biggest and hottest star in boxing. The fight garnered a total of 2.2 million pay-per-view buys.

After a massive upset win by Evan Holyfield in their first match in November 1996 via 11th-round TKO to win the WBA Heavyweight Title, boxing fans were eager to see if Mike Tyson would be able to avenge his loss to him in the rematch in June 1997 as it amassed a 1.99 million pay-per-view buys. But the match’s result became one of the most infamous outcomes in the sport’s history.

Tyson, who seemed to be upset with his opponent for not landing his signature power shots on him, was fed up in the third round and bit off the ears of Holyfield. This resulted in a disqualification loss for Tyson, and Holyfield retained his title. This was one of the most bizarre outcomes in boxing.