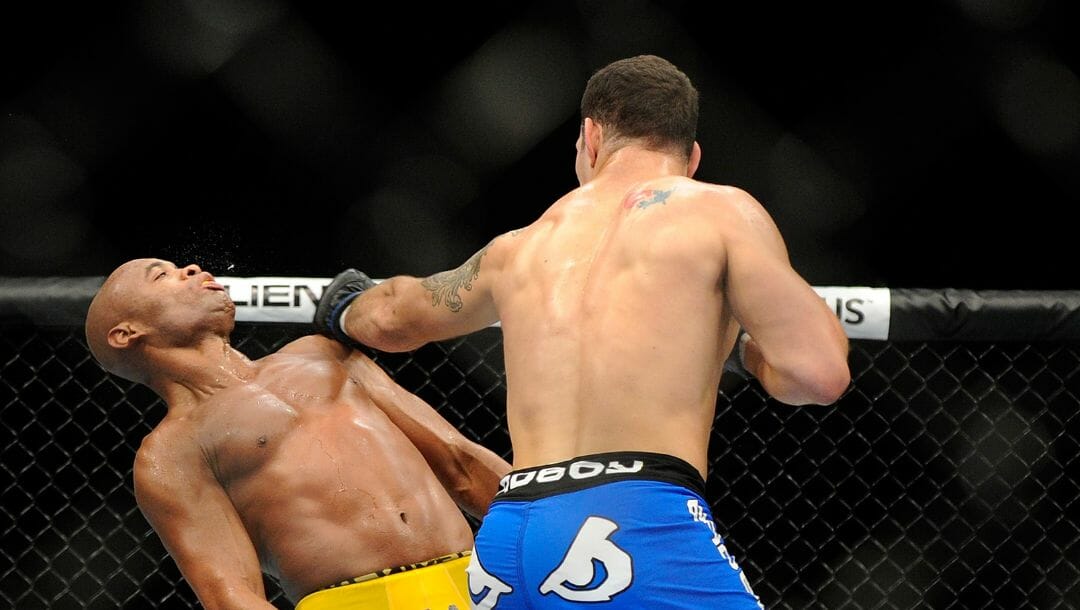 Upsets are one of the most thrilling moments in sports because fans love to see an underdog narrative where a dark horse succeeds against a heavy UFC betting favorite opponent. The UFC is not a stranger to these types of moments as we witnessed a few upsets that were forever indelibly inscribed to the fans’ memory.

With Julianna Pena’s recent gigantic upset over Amanda Nunes, we will be diving into unexpected finishes up to surprising winners of certain matchups that we have seen throughout the history of the UFC. Here’s an all-time list of UFC’s biggest upsets which defied the MMA odds.

Georges St-Pierre was supposed to cruise into an easy victory over Matt Serra in their championship meeting in 2007 at UFC 69. But Serra had other plans as he scored a first-round TKO stoppage to dethrone GSP and become the undisputed UFC Welterweight Champion. The ‘’Terror,’’ a heavy underdog going into the match, connected a right-hand punch to St-Pierre’s head which fumbled the champion.

He then followed it up with a flurry of punches that GSP couldn’t answer as the referee was forced to stop the action, thus declaring Serra as the new king of the welterweights. In the rematch, though, St-Pierre made sure to reclaim his title one year later. Regardless, this 2007 win of Serra will go down as one of the biggest upsets in UFC history.

Ronda Rousey was literally tearing up the competition in the women’s bantamweight division during her title reign, not until she was pitted against the undefeated Holly Holm in November 2015. Holm executed the perfect game plan of stopping the takedowns of Rousey and using her reach advantage to counterpunch the champion.

This game plan eventually set up the picture-perfect head kick that Holm landed to the chin of Rousey, which immediately knocked her down and was followed by the ground and pound punches that prompted the referee to halt the fight in favor of the challenger.

Anderson Silva was on his way to becoming the most dominant champion in UFC history, but Chris Weidman stopped him in his tracks in July 2013 via a second-round knockout that shocked many fans. Silva was in control of the first round and even taunted Weidman for not engaging with him continuously.

The ‘’Spider’’ continued his taunt and was also why he was caught in a left hook punch that the ‘’All-American’’ uncorked when he saw the opening. That led to the beginning of the end for Silva as Weidman finished off the match with a flurry of punches on the ground to become the new undisputed UFC Middleweight Champion.

Julianna Pena’s win over Amanda Nunes is the most recent upset in UFC as she scored a second-round submission in the co-main event of UFC 269 last December 2021. Pena snapped Nunes’ 12-fight winning streak, which dates back to 2015 to become the undisputed UFC Women’s Bantamweight Champion.

The ‘’Venezuelan Vixen’’ poured in the pressure on the champion from the opening bell and put her to her heels to prevent any powerful attack from Nunes. This game plan was rewarded because Pena was able to secure a takedown to her visibly gassed foe, thus ultimately taking her back and locking in the rear-naked choke submission to force the tap.

Joanna Jedrzejczyk is also a heavy favorite to ease past Rose Namajunas for her 15th straight and 6th title defense in their 2017 title showdown. Namajunas entered the match with 6 wins and 3 losses record, which obviously was an added factor to the underdog tag. But Namajunas made sure that she would be remembered as the champion slayer after she unloaded a short left-handed punch that dazed and dropped Jedrzejczyk right away.

‘’Thug’’ proceeded with more powerful punches on the ground to make the champion tap and quit as the referee stepped in to stop the match officially. The pair went on a rematch five months later, and Rose Namajunas that her first encounter victory was not a fluke after scoring a unanimous decision win over Joana Jedrzejczyk for the second time around.