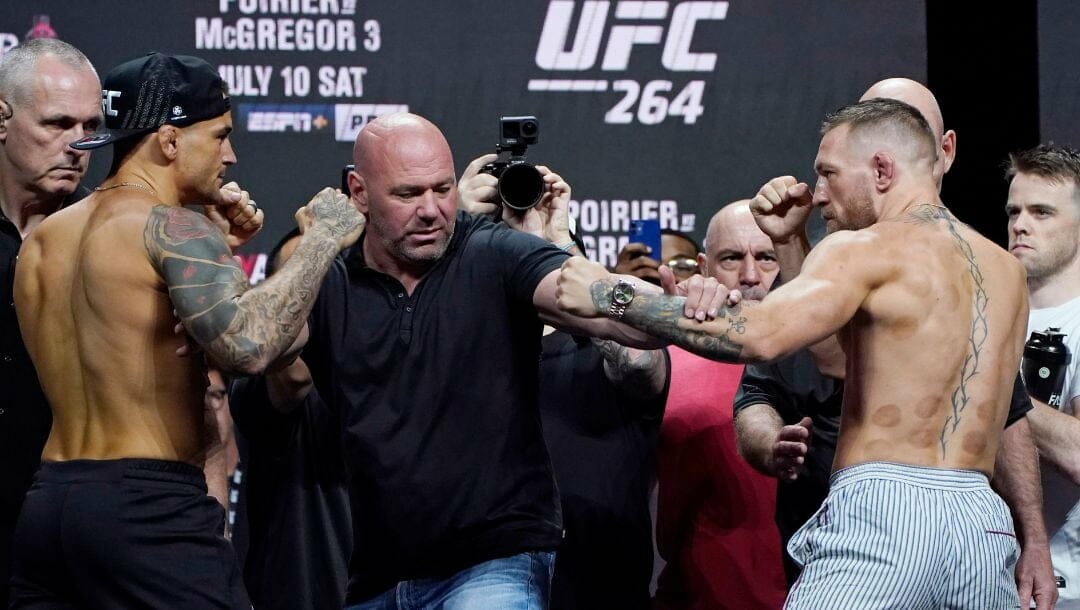 Heated matchups turn into rivalry, which evolves into trilogy matches to settle the score between two fighters and adds additional fuel to the UFC betting odds. So far, 15 trilogy matchups have been completed in the UFC, with the latest being the entertaining rivalry between Deiveson Figueiredo and Brandon Moreno, which was settled last January 2022, where the former regained his UFC Flyweight title via unanimous decision.

We are months or maybe years from seeing another rubber match inside the Octagon which will boost the UFC odds, but today we will be looking back at some of the best trilogy fights in UFC history through this top eight list.

This trilogy between Georges St-Pierre and Matt Hughes was witnessed from 2004 to 2007. Matt Hughes won the first match via first-round submission in 2004 to give GSP his first career loss. But St-Pierre got one back in their rematch in 2006 through second-round TKO. Then the Canadian welterweight great ended the trilogy fight through second-round submission in 2007 to close the rivalry with Hughes.

Randy Couture and Vitor Belfort’s matches were all decided by way of TKOs, with Couture getting the first fight in 1997 in the first round. Seven years later, Belfort exacted revenge in 2004, which happened to be in the first round as well. But seven months later, in the third bout, Couture made sure to get away the victory via third-round TKO stoppage to win not only the rubber match but also the light heavyweight title.

Cain Velasquez and Junior Dos Santos were the second pair in the heavyweight division featured in a three-fight series. Dos Santos did quick work of Velasquez in the first meeting through a first-round knockout. Then, Velasquez dominated the rematch and claimed a unanimous decision victory to reclaim his title before ending the chapter in 2013 at UFC 166 to maintain his status as the undisputed heavyweight champion.

If the Velasquez-Dos Santos trilogy were the second trilogy in the heavyweight division, then Tim Sylvia and Andrei Arlovski were the first pair to do so. The first encounter saw Arlovksi submit Sylvia in the opening round of their 2005 match. Fourteen months later, Sylvia had his first-round TKO finish to make it 1-1. Then, three months after the second match, Sylvia finally put the rivalry to bed by scoring a unanimous decision victory over Arlovski in the third match.

The third and latest UFC heavyweight trilogy was between Daniel Cormier and Stipe Miocic. It was kicked start by Cormier’s first-round TKO win over Miocic in 2018 to become a two-division champion. But Miocic reclaimed his belt in August 2019 at UFC 241 via fourth-round TKO to set up a match for all the marbles. Miocic also claimed the third fight to spoil Cormier’s last fight in the UFC and keep his status as the king of the heavyweights in the promotion.

The three fights between Forrest Griffin and Tito Ortiz is one of the most exciting ones in this list as the first two meetings were decided by split decision wins, with Ortiz picking up the first one and Griffin claiming the second one to tie up the score. Then in their third and final meeting in July 2012 at UFC 148, Griffin put a definitive end to the rivalry by earning a unanimous decision win over Ortiz.

Forrest Griffin competes in the final fight of his professional career,

when he def. Tito Ortiz in their trilogy fight at UFC 148 pic.twitter.com/TvIewGbu9X

Matt Hughes was another victim of trilogy losses when he suffered another 2-1 series loss to B.J. Penn, who won the first match in 2004 through first-round submission. But Hughes got one back two years later in September 2006 via third-round TKO, then in November 2010, B.J. Penn dismantled Matt Hughes in the third match in just 21 seconds to produce the fastest finish in any trilogy fight in the UFC.

Hughes originally intended to take the rest of the year off, but when the UFC offered him a chance to complete the trilogy, he immediately took the fight.

The third contest ended quickly, as BJ Penn knocked out Hughes in 21 seconds, putting an emphatic end to the trilogy.

Wrapping up this list is the heated rivalry of Dustin Poirier and Conor McGregor. In September 2014, they first locked horns and were relatively in the early stages of their career as McGregor TKOed Poirier in the first round. But in the rerun, the ‘’Diamond’’ made sure to have his revenge victory in January 2021 to even their record. Then, in the third meeting, McGregor broke his leg, which prompted the end of the match, giving Poirier the upper hand in the head-to-head score.

BetMGM is the premier sports betting destination for MMA betting.

Whether you’re new to the sport or a longtime fan, there’s something for everyone to bet on, including fight winner, live betting, and futures. Check out the MMA betting page today to get closer to the octagon!