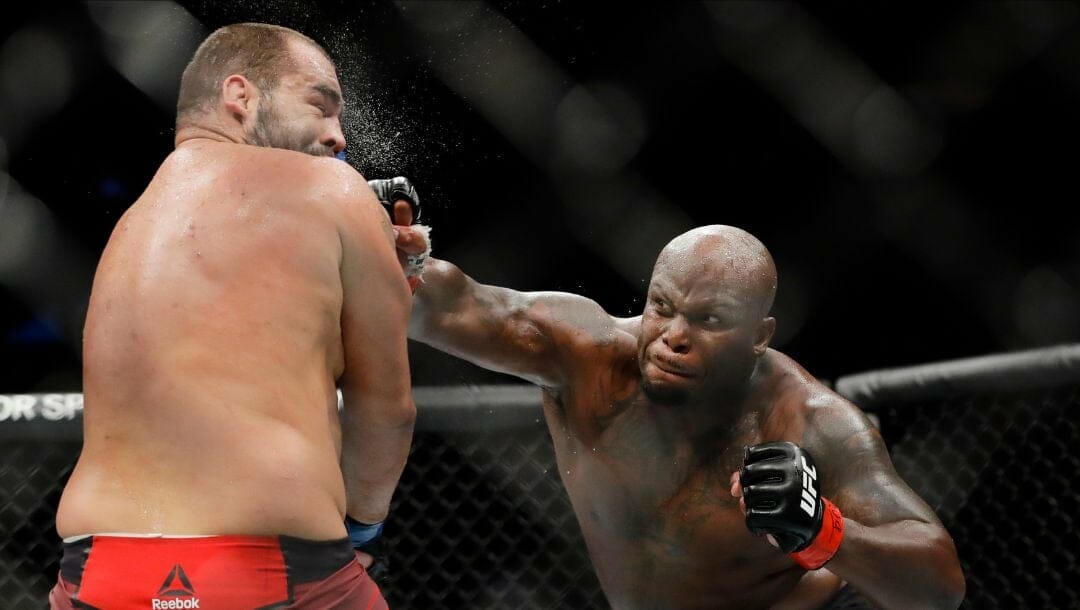 An exciting heavyweight clash goes down this weekend inside the UFC APEX in Las Vegas as number five-ranked contender Serghei Spivac (15-3) faces the number seven-ranked challenger Derrick Lewis (26-10) in the main event of UFC Fight Night to determine who would progress and improve their chances in the UFC odds of inching closer a title shot.

With a combined 28 KOs, these two heavy hitters won't go all 5 rounds 👀@TheBeast_UFC vs Serghei Spivac is OFFICIAL for Nov 19! pic.twitter.com/rtTCGVttGE

Spivac, who currently rides a two-fight win streak, will be the UFC betting favorite at -175, while Lewis, who lost two in a row, will play the underdog role at +145. These two heavyweight contenders are known to be great finishers with a combined 35 stoppages on their record, 22 for Lewis (21 TKO/KO and one submission) and 13 for Spivac (seven TKO/KO and six submissions).

Derrick Lewis is a certified UFC veteran who competed in 25 fights during an eight-year run. Before the Las Vegas-based promotion signed him to its roster, Lewis accumulated an impressive MMA record of nine wins, two losses and one no-contest in 12 fights, along with the LFC Heavyweight Title, which he won over Ricky Shivers in their championship showdown in March 2013.

The “Black Beast” immediately made his presence felt in the UFC by scoring two first-round finishes over Jack May (in April 2014) and Guto Inocente (in July 2014). However, in his third match, Lewis suffered his first promotion defeat at the hands of Matt Mitrione with a first-round knockout. He instantly returned to the win column with a second-round TKO victory over Ruan Potts in February 2015 but absorbed another loss from Shawn Jordan in a fight later in June 2015.

Lewis was primed to be the next title because of this string of victories, but Mark Hunt delayed his ascent by giving his third UFC loss and snapping his streak with a fourth-round TKO finish in June 2017. Due to this, the Silverback Fight Club representative needed to win three more fights over Marcin Tybura (third-round KO in February 2018), Francis Ngannou (unanimous decision in July 2018) and Alexander Volkov (third-round KO in October 2018).

After this three-fight streak, the now 37-year-old fighter finally secured his championship fight against Daniel Cormier in November 2018, but he got submitted by DC in the second round via a rear-naked choke. It was followed by another defeat at the hands of Junior dos Santos four months later, in March 2019, with a second-round TKO defeat. These two-straight losses didn’t discourage the “Black Beast” because he was able to have a resurgence and won four successive fights inside the Octagon.

He scored a close split decision victory over Blagoy Ivanov in November 2019, unanimously beat Ilir Latifi in February 2020, TKO’ed Alexey Oleinik before knocking out Curtis Blaydes in February 2021 to set up a UFC interim title showdown with Cyril Gane in August 2021. Unfortunately, for the second time around, Lewis fell short of winning a title in the UFC as Gane scored a TKO finish in the third round of their bout.

Despite this championship debacle, he quickly returned to the win column by knocking out Chris Daukaus in December 2021 to set the record for most knockout finishes in UFC history with 13. Sadly, it was his last win inside the Octagon as he sustained back-to-back losses from Tai Tuivasa (second-round knockout in February 2022) and Sergei Pavlovich (first-round TKO in July 2022) to remain winless this year. He hopes to break that with a win over Serghei Spivac.

Serghei Spivac was an undefeated MMA prospect when he joined the UFC in 2019. He was perfect in his first nine bouts outside the Las Vegas promotion and finished all of his opponents via TKO/KO or submission. The Moldovan officially made his UFC debut in May 2019 against Walt Harris, but he was rudely welcomed with a first-round TKO setback to taste his first-ever career defeat.

The “Polar Bear” instantly redeemed himself by submitting Tai Tuivasa in October 2019 via arm-triangle choke to record his maiden UFC victory. Four months later, in February 2020, Spivac suffered another loss courtesy of Marcin Tybura via unanimous decision. To avoid being cut from the roster, the Polar Bear team athlete needed an impressive run and that is what he delivered in his next three fights.

He started a three-fight streak beginning with a majority decision win over Carlos Felipe in July 2020, followed by a second-round TKO triumph over Jared Vanderaa in February 2021 and a masterful unanimous decision victory over Aleksei Oleinik in June 2021 to earn a spot in the top ten rankings of the heavyweight division. However, this hot streak by Spivac was halted by Tom Aspinall in September 2021 after a first-round TKO win.

This loss postponed the 27-year-old’s rise to title contention. Fortunately for the Moldovan mauler, he was able to win back-to-back stoppage wins over Greg Hardy (first-round TKO in March 2022) and Augusto Sakai (second-round TKO in August 2022) in his two latest bouts to comfortably sit at the fifth spot in the division’s rankings. A win over Derrick Lewis this weekend will significantly help his case to stand in line for the next title shot.

Lewis vs. Spivac: Tale of the Tape and Fight Analysis

The tale of the tape for this huge heavyweight clash is almost identical as both men stand at 6-foot-3 in height. In terms of reach, Lewis will enjoy an inch of advantage at 79 inches as Spivac has 78 inches; however, the Moldovan has a slight leg reach edge of half an inch at 44 inches because the American has 43.5 inches. Looking at their records, both Lewis and Spivac are feared finishers.

Lewis has the higher TKO/KO percentage at 81% compared to Spivac’s 47%, but the latter has more submission victories at 40% against the former’s lowly 4%. Their decision wins are similar, with Lewis having 15% while Spivac holds 13%. Because of his 25-fight run under the UFC, Lewis has more average fight time of 9:02 in contrast to Spivac’s 8:34, which also gives a 0.53 knockdown average per 15 minutes to Lewis over Spivac’s 0.

Regarding the striking department, the Moldovan has an advantage number-wise, with 3.79 strikes landed per minute (equal to 51%) against the American’s 2.57 (equivalent to 50%). Defensively, Spivac absorbs more strikes per minute at 2.96 but has a high defense percentage of 55% versus Lewis’ 2.57, which is only equal to 41% rate. If the striking department has close statistics, the grappling area has a very different story.

Stylistically, this favors Serghei Spivac because he has the grappling upper hand that is heavily based on his Sambo style of fighting, while Derrick Lewis relies solely on his striking backed by his incredible power that could sleep any heavyweight contender when he lands it. Entering the match, Spivac is fully aware of Lewis’ power, so I believe he will neutralize it by taking him down.

The Moldovan would be taking off a page from Daniel Cormier’s book by utilizing his top-class grappling skills to hold and put Lewis down the mat and maneuver his way to a submission technique which would eventually submit the former title challenger. Additionally, Lewis is already at the latter stages of his career at 37. Although the power might still be there for him, the timing and reflexes might start to catch on, which might be a problem for him in this match against a much younger opponent.