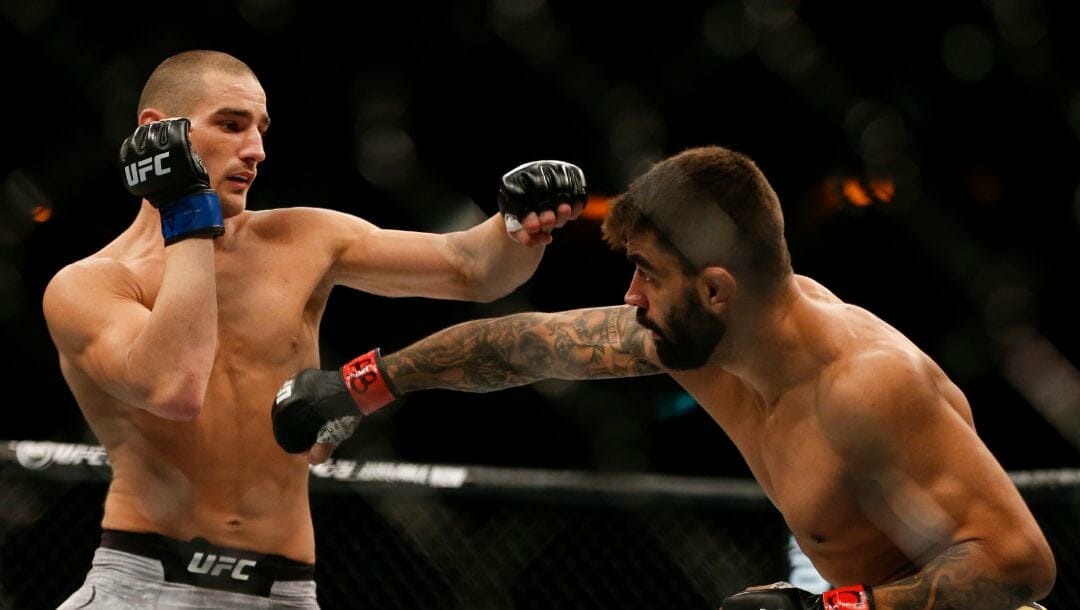 After an unfortunate injury to Kelvin Gastelum, there has been a significant change in the main event of the first UFC headliner this weekend as Sean Strickland (25-5) agrees to step in as a late replacement to face Nassourdine Imavov (12-3). Another major adjustment to this fight that goes down inside the UFC APEX is the weight class because it will now be contested in the light heavyweight division from the original middleweight schedule.

Sean Strickland has agreed to replace Kelvin Gastelum this Saturday at #UFCVegas67 and will face Nassourdine Imavov in a five-round, 205-pound main event, sources told @bokamotoESPN.

Gastelum withdrew due to a mouth injury. pic.twitter.com/tmGxMCwI1z

Despite stepping in late, Strickland shares the same UFC odds with Imavov at -110 in BetMGM’s online sportsbook, mainly because of his late notice and inability to have a full fight camp. As for Imavov, it will also be a short adjustment period of preparation for a new opponent. Additionally, both athletes will meet at a higher weight class to ensure they will not have a problem cutting weight.

For Imavov, this is his opportunity to gauge himself against one of the top contenders in the division (although this fight takes place in the 205-pound weight class), especially since Stickland is in the top ten of the division’s rankings. If the Frenchman scores a huge victory this weekend, he will be guaranteed a spot in the upper tier of the middleweight division and inch closer to a title shot.

He extended this streak to six with wins over Brendan Allen (second-round TKO in November 2020), Jack Marshman (unanimous decision in October 2020) and Nordine Taleb (second-round TKO in October 2018). Prior to his win streak, the Xtreme Couture fighter has fought nine times under the UFC, winning six and only dropping three of them. He won his promotional debut against Bubba McDaniel in March 2014 via first-round submission.

He immediately added Luke Barnatt to his pile of wins with a close split decision triumph in May 2014. But Santiago Ponzinibbio snapped his undefeated run with a unanimous decision defeat in February 2015. Strickland rebounded emphatically with three successive wins against Igor Araujo (unanimous decision in July 2015), Alex Garcia (third-round TKO in February 2016) and Tom Breese (split decision in June 2016).

Then, the 31-year-old went on a 1-2 win-loss record as he only won against Court McGee in November 2017 and absorbed losses to Kamaru Usman (unanimous decision in April 2017) and Elizeu Zaleski dos Santos (first-round knockout in May 2018). Ahead of his UFC campaign, Strickland already amassed 13 victories outside the promotion, including ten stoppage wins from 2008 to 2013.

The UFC signed Nassourdine Imavov in 2020 after a magnificent campaign in various MMA promotions around Europe, where he accumulated eight wins and only two losses, including four submissions and three TKO/KO finishes. The Frenchman made his promotional debut against Jordan Williams in October 2020 and handily beat him via unanimous decision.

But even before building momentum, Imavov absorbed his first UFC loss at the hands of Phil Hawes in February 2021 in a close majority decision defeat to delay his ascent in the middleweight rankings. This prompted the fighter from Paris to put up an immaculate win streak and make up for this blemish in his record. The “Sniper” strung up three consecutive victories, beginning with a second-round TKO finish of Ian Heinisch in July 2021.

Imavov immediately added Edmen Shahbazyan to his victim list by engineering another second-round stoppage in November 2021. The MMA Factory representative continued this winning streak in September 2022 after unanimously beating Joaquin Buckley in their showdown inside the Accor Arena in Paris.

This three-fight winning streak was responsible for Nassourdine Imavov’s place as the 12th-best contender in the middleweight division. Also, it officially gave him the status to be one of UFC’s up-and-coming young prospects and a future challenger for the title due to his well-rounded mixed martial arts skill set. A win for him this weekend would undoubtedly push his name into the top ten rankings.

Strickland vs. Imavov: Tale of the Tape and Fight Analysis

The tale of the tape between the two fighters is almost identical, with Imavov having a two-inch height advantage at 6-foot-3 against Strickland’s 6-foot1 frame. Strickland, however, will have a slight edge in reach as he has 76 inches compared to Imavov’s 75 inches reach; however, Imavov will have the half-inch leg reach advantage at 42 inches against Strickland’s 41.5 inches of leg reach.

Record-wise, the Frenchman has the better number with 12 wins and only three losses, while the American has 25 victories and five defeats to his tally. Imavov still holds the better percentage in terms of finishing rate, with 45% of his wins coming by way of TKO/KO and 36% through submissions, compared to Strickland’s 40% of TKO/KO and 16% of submission ratio. However, Strickland has more decision victories at 44% versus Imavov’s 25%, which accounts for a lot of experience for him.

Both athletes split the major categories in the grappling territory as Strickland holds the better takedown average per 15 minutes at 1.09 and takedown accuracy of 63% against Imavov’s 0.95 and 23% numbers. However, the 27-year-old has the better takedown defense at 76% and a submission average of 2.38 per minute compared to his 31-year-old counterpart’s 63% and 0.26.

Regardless of this tale of the tape and statistical differences between the two ranked middleweight contenders, this fight is guaranteed to be a striking spectacle, primarily since both fighters are known to be strikers and are willing to engage in the stand-up. I understand why oddsmakers put Strickland as the favorite fighter to win against Imavov due to his wealth of experience over the up-and-coming fighter.

Strickland’s vast experience of fighting the top echelon of the division for years can spell the difference in this match, particularly the durability and veteran smarts he has gained in facing the likes of Uriah Hall, Jack Hermansson, Alex Pereira and Jared Cannonier. This is not a knock on the level of competition that Imavov has faced, but it is a big step up for him, especially if he can pull off a victory against Strickland.