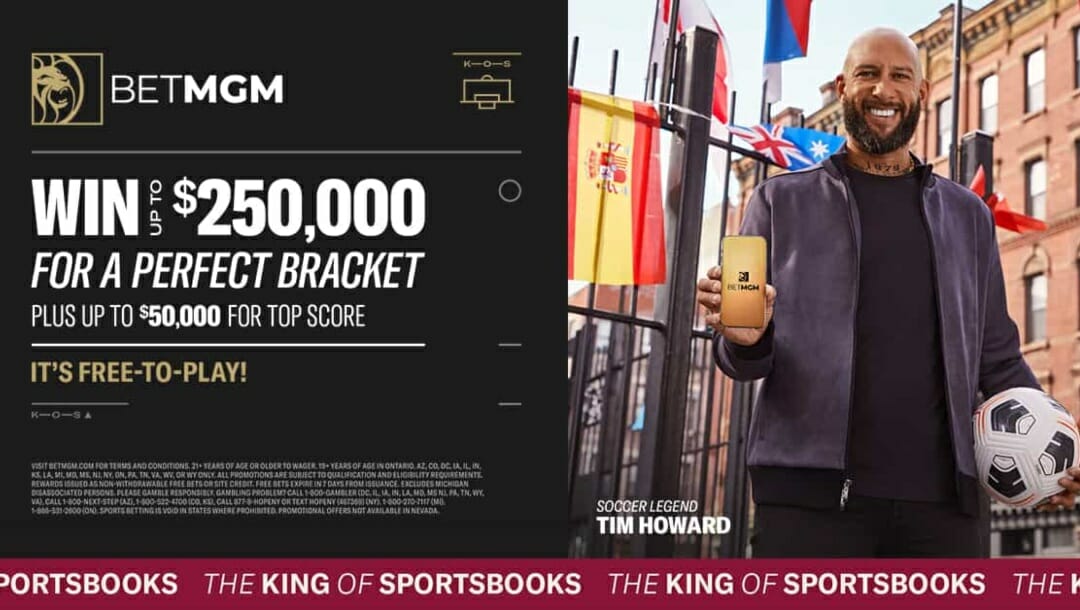 You can win big with World Cup predictions at the online sportsbook without wagering a single penny.

From Nov. 20 through Dec. 18, 64 matches will be played in Qatar. If you correctly predict the winner of each match in BetMGM’s free-to-play World Cup Bracket Challenge, you’ll receive $250,000 (split if multiple winners).

But even if you don’t have a perfect bracket, you can still win $50,000 if you have the highest-scoring bracket. And all players will receive a $5 Parlay Free Bet for each Group Stage winner correctly predicted.

Register for a BetMGM Sports account or login to your existing BetMGM account to enter the World Cup Free-to-Play Bracket Challenge of what state you are in! The promotion will be available in our Promotions Tab.

Do I need to deposit or place a bet to participate?

No, the game is completely free to play! There is no requirement to make a deposit or place any bets to participate.

How many bracket entries am I allowed?

You can only enter once in the free-to-play bracket. Only your first bracket entry submission will be eligible. Any subsequent bracket entries will not count toward this promotion. Please make sure to read full Terms & Conditions (below) regarding participation eligibility.

Can I edit my picks before the tournament begins on November 20th?

Yes, you can edit all your picks. Once the first game kicks-off on November 20th, your selections will be locked and can no longer be edited.

The user (or users) at the end of the tournament that predict correctly every single winner of each match will win the $250,000 grand prize. There is no guarantee on this grand prize. The prize will be divided evenly amongst eligible winners in the event of a tie.

The user (or users) at the end of the tournament with the most points will win the $50,000 prize. The prize will be divided evenly amongst eligible winners in the event of a tie.

How does the Group Stage free bet prize work?

After the Group Stage concludes, each user will receive a $5 free bet for each correct group winner they predicted.

What happens if a game is canceled?

If a game is canceled, the winner of the game will be based on what is determined by the confederation and points to the leaderboard will be given accordingly.

Is there a leaderboard to check my progress?

This challenge features a leaderboard that updates in real time shortly after each event is over. Participants will be able to view their standings by going to My Account >> Promotions >> Perfect Bracket Challenge >> Leaderboard

Feel free to check the full Terms & Conditions (below) or contact us via chat or email for 24 hour support – We’ll be happy to help!

I just won! When will I receive my cash prize?

All cash prizes will be available in the winning player’s BetMGM account within 72 hours of the World Cup Finals match on Monday, April 4, 2022.