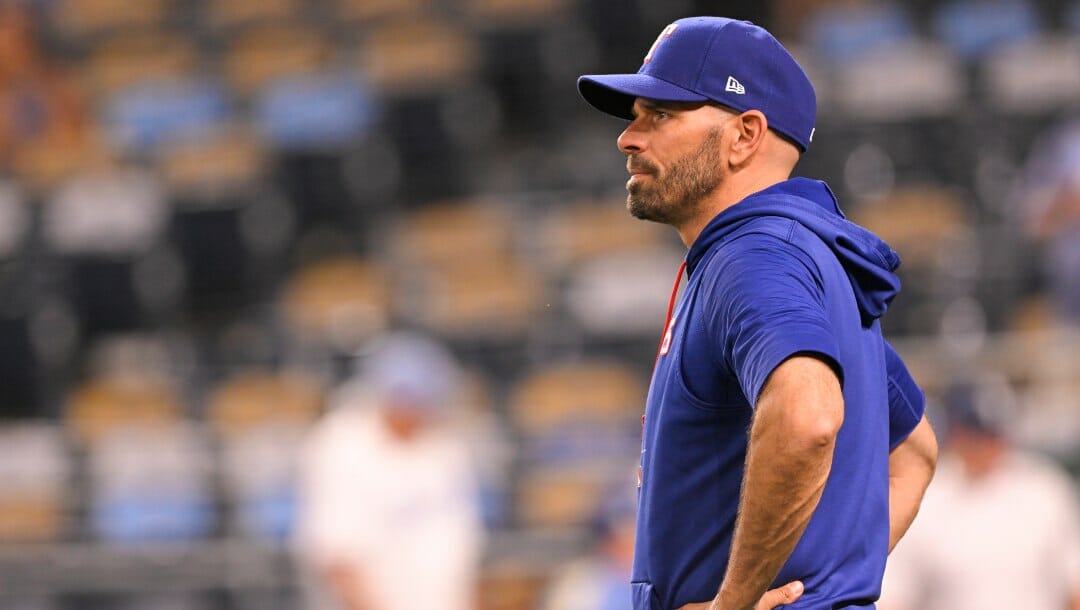 Having just signed star infielders Corey Seager and Marcus Semien on contracts worth a combined $500 million in the offseason, Texas Rangers fans went into 2022 with very high hopes. Could a run in the baseball playoffs be on the horizon? At least a competitive record in the AL West?

With less than eight weeks left in the regular season, the Rangers have a record of 51-63, a miserable 23 games back from the AL West first-place Houston Astros. In eighth place for a Wild Card, Texas is now effectively out of the postseason, and it didn’t take long for fingers to start pointing at manager Chris Woodward.

On Monday, August 15, the Rangers announced they had dismissed Woodward from his role, with third base coach Tony Beasley stepping in as interim manager through the remainder of the season. Woodward has managed the team since November 3, 2018, and leaves the position with a record of 211-287.

So, as the Rangers turn their focus to the future and get their house in order before 2023, who are the likely candidates to replace Woodward as manager?

Announced as the Rangers’ interim manager through the end of the season, Beasley could be asked to stay on in the position if he proves he can get results.

55-year-old Beasley has been with the organization for eight years and is currently the longest-tenured member of staff. While this is his first shot as a manager in the major leagues, he has previously held coaching positions with the Washington Nationals and Pittsburgh Pirates, and served as a minor league manager on several levels in both organizations.

Beasley is highly respected within the Rangers organization, so it will be interesting to see what he does with the team and whether it’s enough to keep the position long-term.

“Education is power. Knowledge is power.”

Coach Tony Beasley of the @Rangers on opportunities in baseball both on and off the field. pic.twitter.com/2pM0INDTPW

The current first base coach for the Cleveland Guardians, Alomar Jr. is likely to be interested in the Rangers’ managerial position, and they should definitely be interested in him. A six-time All-Star catcher inducted into Cleveland’s Hall of Fame in 2009, Alomar Jr. was a big name in baseball long before he began his coaching career.

Following his retirement from playing, Alomar Jr. was named the catching instructor for the New York Mets in 2008, where he stayed until he was appointed first base coach of the Cleveland Indians (now Guardians) in 2010. Alomar Jr. was promoted to Cleveland’s bench coach in September 2011 and took on the role of interim manager in 2012 after the firing of Manny Acta.

After the 2012 season, Alomar Jr. returned to being Cleveland’s first base coach until 2020, when he was again called up to be interim manager while Terry Francona took time off due to health problems. In 46 games with Alomar Jr. acting as manager, Cleveland went 28–18.

Having played for the Rangers during the 2005 season, Alomar Jr. already has a connection to the organization and could be an excellent option for the full-time managerial role. He’s highly respected with quantifiable success as a major league coach — expect to hear his name in the off-season.

If you’re talking about top managerial candidates in Major League Baseball, Espada’s name is bound to come up. The 46-year-old currently serves as the bench coach for the Houston Astros, recently stepping up to fill in for manager Dusty Baker while he was away with COVID-19.

Espada has interviewed for numerous vacant managerial positions over the last five years, including with the Rangers, Toronto Blue Jays, Minnesota Twins, San Francisco Giants, Chicago Cubs, New York Mets, and Oakland Athletics. He’s yet to land the dream role, but considering he’s served as a bench coach, third base coach, special assistant to the GM, and infield coach, plus held multiple positions in the minors, Espada is not exactly short on experience.

Could the Rangers be the perfect fit this time around? Espada is bound to be a top contender for the managerial role.